LONDON (ICIS)–Economic sentiment and employment expectations contracted in June across both the EU and eurozone, according to the latest data from the European Commission on Wednesday.

The Economic Sentiment Indicator (ESI) fell  1.7 points to 102.5 for the EU, and by 1.0 points to 104 for the eurozone, compared to the previous month, driven by a drop in confidence from construction managers.

Stocks of finished products were assessed as less scarce, which could be attributed to some easing in the supply chain.

Both export orders and assessments of past production picked up considerably, but these are not included in the overall confidence indicator for confidence.

Construction confidence dropped 2.1 points as employment expectations in this sector had the biggest contraction since May 2020. Labour shortages marked a modest decrease on a month prior (from 30.6% to 28.5%). 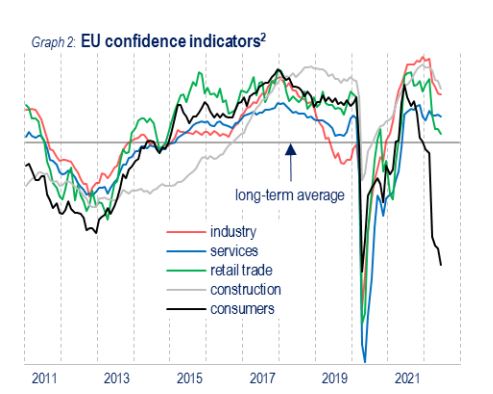 Order books for the construction industry also weighed on sentiment, and while shortages of materials and equipment also fell from the previous month (from 26.8% to 24.3%), it was cited as a reason for the slowdown in building activity.

Of the other ESI components, consumer confidence marked the biggest decline falling 1.9 points, due to the current economic situation, followed by the 0.8-point drop in retail trade confidence and service sector confidence declining 0.4 points.

The Economic Uncertainty Indicator (EUI) also surpassed previous records, 1.3 points higher in June to settle at 23.9 points due to the increase among consumers, supported by sentiment in industry and outweighing confidence in retail trade, services and construction.

Financial services confidence (not included in the ESI) fell 2.1 points in June, due to weakening sentiment in all three components: managers’ appraisals of past demand, past business situation and demand expectations.

Selling prices rose to a new all-time high in retail, stabilised for the services industry, while expectations in the industry and construction segments eased for the second consecutive month.