HOUSTON (ICIS)–The California ports of Los Angeles and Long Beach are extending the hours during which trucks can pick up and return containers as they try to improve freight movement and delays through ports.

Port congestion is just one issue that has contributed to supply-chain disruptions and shortages of necessary resources as the US economy reopened following lockdown measures to help stop the spread of the coronavirus.

The Port of Los Angeles will expand weekend operating gate hours through a program called “accelerate Cargo LA”, which will operate on a pilot-basis at first to ensure that gate availability meets cargo demands and provides greater transparency to improve efficiency.

In addition, both ports have called on marine terminal operators to incentivise the use of all available gate hours, especially night gates, to reduce congestion and maximise cargo throughput capacity.

The actions were taken after consultation with multiple supply chain stakeholders and the US Department of Transportation.

The Port of Los Angeles and Port of Long Beach are the two largest ports in the nation, first and second respectively, and combined are the ninth-largest port complex in the world.

RECORD DELAYS
As of midday on Monday, there were 97 container ships in port, according to the Marine Exchange of Southern California (MESC).

MESC defines total vessels in port as the sum of vessels at anchor, in a drift area, and at berth. 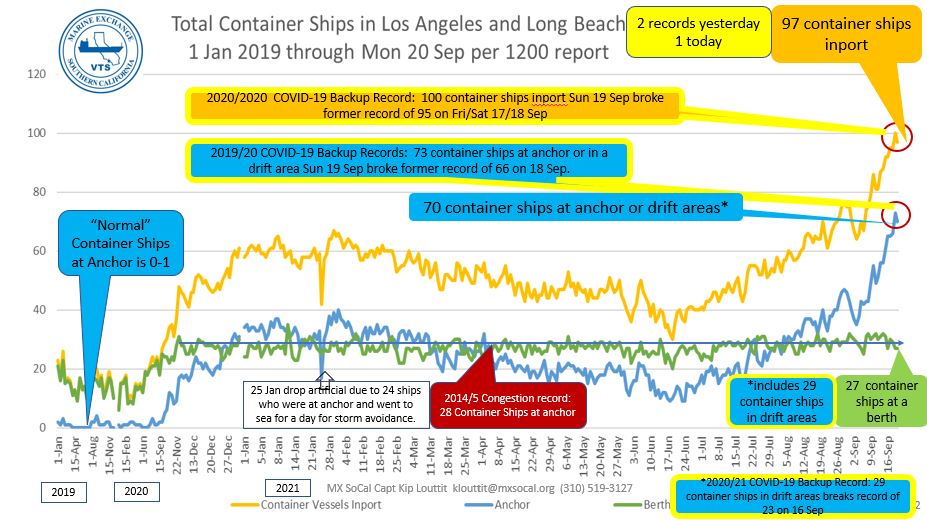 Allowing increased access time for trucks will likely improve the situation. But other issues exist throughout supply chain logistics that are affecting markets, including rail and trucks.

Railroads have seen increased inland congestion amid the record volumes of goods entering US ports.

In the US, chemical railcar loadings represent about 20% of chemical transportation by tonnage, with trucks, barges and pipelines carrying the rest.

The trucking industry has been dealing with a shortage of drivers for years, but it intensified during the pandemic as truck driving schools were unable to operate during the lockdowns.

Bob Costello, chief economist for the American Trucking Associations (ATA), said earlier this year that all trucking companies are struggling to find enough drivers and that it was going to take a while to work out.

“It is important to remember that ATA’s tonnage data is dominated by for-hire contract freight, with a very limited amount of spot market freight,” Costello said. “I continue to believe that tonnage has not recovered to pre-pandemic levels for two main reasons – broader supply chain issues, like semiconductor shortages, as well as industry specific difficulties, including the driver shortage and lack of equipment.”