Global oil players have substantial capacity unutilised and could have moved more strongly to reduce supply pressure for oil and gas, with crude pricing doubling over the course of 2021. 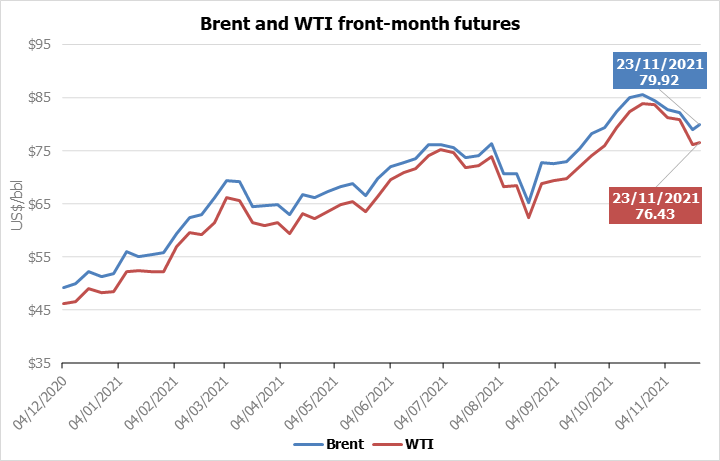 “[A factor]  that caused these high prices is that the position of some of the major oil and gas suppliers, and some of the countries did not take, in our view, a helpful position in this context,” said IEA chief Fatih Birol.

Signatories to  the OPEC+ agreement have around 6m bbl/day of spare capacity un-used, Birol said, who also criticised moves by some gas suppliers to keep storage levels low in Europe despite the extreme price spikes seen in late 2021.

“Some of the key strains in today’s markets may well be considered artificial,” he added.

Price for key European crude oil benchmark Brent stood at over $82/bbl in early spot trading on Thursday, while US WTI futures were trading for over $78/bbl.

Following calls for OPEC to intervene more strongly to arrest spiking oil prices, US President Joe Biden announced on Tuesday plans for a coordinated release of crude oil from the US Strategic Petroleum Reserves (SPR), with China. The UK, South Korea, Japan and India are also expected to release stocks.

Despite the intervention, oil prices rose that day and have continued to increase through the week. OPEC+ countries have so far pledged to continue gradually unwinding production curbs at a rate of 400,000 bbl/day each month through to late 2022, but has declined to accelerate that schedule.

Artificial supply tightness is one of several factors driving high crude pricing, Birol said, with the pace of the economic recovery this year also pushing up pricing. The IMF projected in October that global GDP for 2021 is likely to stand at 6%, up from earlier projections of 5.5%.

The pace of the economic recovery pushed crude demand growth to multi-decade highs, with year on year increases of 7% expected for the sector, and 5% expected for natural gas, according  to the IEA.

Despite the push for emissions reduction policies, 2021 is also likely to stand as a banner year for the coal sector, which stands to grow 10%, the most substantial demand growth in the history of the market.

“This rapid growth put a lot of pressure on energy supply chains, a factor behind energy prices,” Birol said.

Extreme weather events seen during the year in the US and China, and droughts in Brazil curbing hydropower capacity, also drove current pricing levels, Birol said. There was an unprecedented number of planned and unplanned outages, again driven in part by floods, fires, and other extreme weather events such as the US Gulf Coast polar storms in February.

Annual investments in oil and gas have fallen from historic peaks, but this is “mainly if not exclusively” driven by the collapses in commodity pricing seen in 2014-15 and 2020, Birol said, rather than as a result of clean energy policies.

“[Many governments do not] put enough emphasis or provide the incentives for clean energy policies, including demand side policies to bring the demand down,” Birol added.

Thumbnail picture: Oil storage tanks at Daqing Oilfield in Daqing, northeast China. The country is one of the players expect to release more oil supplies in to the global system. Photo by Xinhua/Shutterstock

US Koch Fertilizer to increase UAN production at Kansas facility