LONDON (ICIS)–A surge of new LNG regasification capacity in northwest Europe could lead to a 37% increase in LNG terminal daily sendout over the coming 20 months, an ICIS analysis shows. However, this will only be possible if European prices remain globally competitive during this time.

Europe’s pivot away from Russian natural gas and instead towards a greater reliance on LNG, due to the war in Ukraine, may still not be as quick as policy makers’ hope, despite the remarkable acceleration in new import infrastructure projects in recent weeks.

In many cases the projects announced had already been in slow development for some time. A lack of firm commitments so far casts doubt regarding their real contribution to Europe’s security of supply, especially in the short term.

Therefore a key question remains over how much these new projects, and LNG supply in general, can help reduce Europe’s need for Russian gas in the coming two-to-three years. 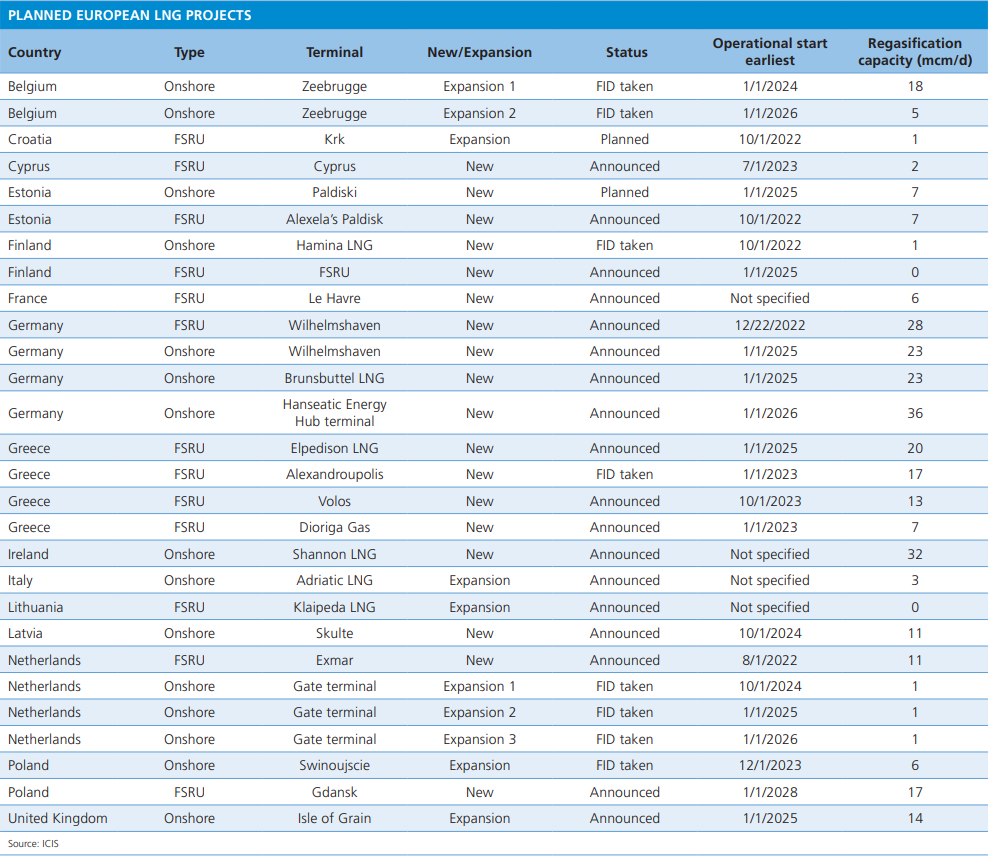 In 2021, Europe imported around 150 billion cubic metres (bcm) of Russian gas, which on average equated to around 385 million cubic metres (mcm)/day. So far in 2022, Europe has been importing an average of around 285mcm/day, which is equivalent to 70% of the current regasification capacity that is being use in Europe.

The European Commission believes that Russian gas imports in 2021 can be reduced by two thirds in 2022, and at the same time LNG imports can be raised by 50bcm.

Further ahead, ICIS analysis shows that new announced projects could possibly bring around 45bcm/year regasification capacity by the end of 2024, versus current capacity, increasing to around 99bcm/year by 2028.

A second important question is whether the upcoming LNG projects are being developed in the right location. This will be crucial as to whether they truly can contribute to the European Commission’s plan to make Europe independent from Russian gas well before 2030.

Southern Europe – particularly Spain – has tremendous regasification potential. However, internal bottlenecks especially between Spain-France-Germany limit how much northern Europe can benefit from this capacity.

Similarly, there is now up to 9bcm of new annual regasification capacity planned in the Baltic States, with only the soon-to-open Gas Interconnection Poland-Lithuania (GIPL) pipeline connecting the region to rest of the continent.

As a result, these projects while improving their own security of supply, will not contribute to the supply security of key markets in central Europe, where gas demand is highest.

Developing regasification capacity where the network is most integrated and consumption the highest is therefore crucial.

In northwest Europe – France, Belgium, Germany and the Netherlands –there are plans to increase regasification capacity by 54bcm/year by 2028. Germany is planning to invest in at least three different LNG terminals with the aim of cutting its reliance on Russian gas. ICIS estimates that should all of these projects be completed, around 60% of Germany’s current Russian supply could be replaced.

If 2022 utilisation rates are considered – at a high of just 45% – ICIS expects the new projects in northwest Europe to deliver by the end of 2024 an additional 26mcm/day of regasified LNG, bringing the total to 97mcm/day.

While further details surrounding the projects continue to appear, so will their likelihood of being completed, their utilisation rate meanwhile will be extremely dependent on market prices. Keeping European Dutch TTF prices at a premium to Asia – irrespective if demand there continues to increase – will be as important to maintaining security of supply as the projects themselves.