MADRID (ICIS)–Over the next three decades, investments in the EU’s chemicals industry will need to amount to €1tr to achieve the net zero emissions 2050 target set out by the 27-country bloc’s Green Deal.

According to plant-by-plant research conducted by consultancies Accenture and NexantECA, in 236 chemicals plants across the EU, meeting the net-zero goal will present an “especially significant” challenge.

“It will require an estimated €1tr of investment, disrupt operations and bring changes in plant networks, employment, and communities. And it will require new technologies and processes—some of them not yet developed,” the report said.

Indeed, the chemicals industry in the EU would need to reduce its greenhouse gase (GHG) emissions by approximately 164m tonnes/year by 2050, compared with 2019 levels, according to research by the European Environment Agency (EEA).

The reduction in emissions has already been significant over the last three decades, a factor that industry bodies say should be considered in coming decades when regulating the chemicals industry’s emissions. 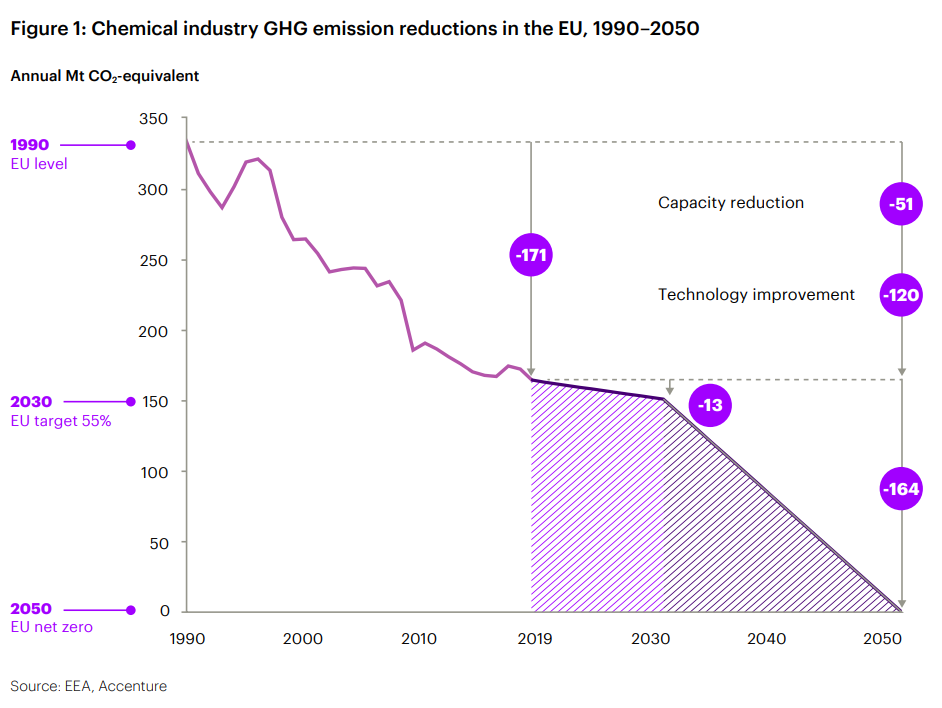 –
However, Elser also said that the chemicals industry could find in greener products a good business opportunity, and one it cannot avoid.

Demands from customers increasingly reflect a higher concern for the environment, potentially making the double pressure coming from regulation and customer’ demands a catalyst for new business opportunities.

“In the end, it is a challenge in two dimensions: on one hand, €1tr is a huge investment to come up with, but this transition is not just regulation that companies could still try to negotiate or circumvent,” said Elser.

“More importantly, you have customers’ commitments coming even more aggressively than the EU’s targets. Some global consumer goods companies have already committed to achieve net zero by 2040.”

EIGHT PRODUCTS, 75% OF EMISSIONS
However, Accenture’s report highlights how certain chemicals are highly polluting and, unless new technologies are found, they would become unsustainable both economically and environmentally if the Green Deal is followed to the letter of the law.

Some EU plants producing some emissions-heavy products are responsible for 75% of GHG emissions: ammonia, ethylene, propylene, nitric acid, carbon black, caprolactam, soda ash, and fluorochemicals. Those were produced in the 236 plants Accenture and NexantECA analysed in detail.

“Chemicals companies would need to invest 15% more capex [capital expenditure] than they do today. But obviously to come up with 15% more cashflow is not easy. It will be a massive challenge: while some sectors may require less capex [to decarbonise], others could require much more than 15%,” said Elser.

“This would be businesses where the economics do not really work out. That is exactly the point where government funding would be required.”

The industry’s GHG emissions come primarily from two sources: the significant amount of energy needed to break and reform chemical bonds; about 60% of the industry’s emissions are from burning fuel to produce the steam, heat and pressure used in that process.

The other source is the carbon dioxide (CO2), nitrogen oxides (NOx) and other GHGs generated in the chemical reactions, about 40% of emissions.

“Making the transition will entail another €200-300bn in standstill costs—essentially, lost profits due to halted production as plants are retrofitted, improved, or rebuilt. In addition, the research estimated that transitioning production of the other chemicals beyond these eight would add another €250-350bn to costs, putting the overall ‘bill’ at more than €1tr,” said Accenture report.

“These figures show that the industry faces a gap of about €365bn over the next three decades to fund net-zero initiatives, requiring an increase in capital investments of more than €12bn/year.”

The EU chemical industry invested €21.5bn in capital projects in 2019, according to Accenture.

The key to achieve this high investment levels will come, said Elser, from collaboration among chemicals producers but also public bodies. The devil will be in the financing details, as is usual.

The report stated: “While being highly complex, the historically grown industrial clusters with a tight interlock between the involved parties also provide opportunities to jointly address the full breadth of emissions, including Scope 3 (indirect emissions in a company’s value chain).”

CAVEATS: GREEN ELECTRICITY AND NEW TECHNOLOGIES
Faced with highly polluting products like soda ash, chemicals producers will have to decide whether it is economically feasible to produce them in the EU or bet for new technologies for cleaner production methods.

Time is against the industry, however. Chemical plants are built for a lifespan of decades, and if EU chemicals facilities were to reach 2050 being net zero, the plants built today should already be planning for that target.

Alas, they are very far from that. Not least on the side of electrification: looking only at steam cracking – producing ethylene, the key chemical building block – a “massive undertaking” to replace fossil fuel-based furnaces with electric furnaces would need to take place.

That process could take 12-18 months for one cracker alone, said Accenture. Moreover, doing this across the EU would require an estimated €200bn and generate standstill costs of €100bn in foregone profit.

“Because steam cracking requires temperatures of above 850°C, the energy demand of these electric steam cracker furnaces would amount to an additional 200TWh, which is equal to 18% of today’s renewable electricity generation in the EU and equal to 7.2% of the EU’s total electricity consumption,” the report said.

Ramping up in such a scale renewable electricity production may be feasible in the next three decades, but Elser spoke of the “huge caveat” around potential new production technologies that could reduce the emissions burden.

The problem is that we are only 28 years away from 2050 and new technologies that are brought up to scale normally take a long time to develop. Once again, time is against EU chemicals.

“Some of the technologies are not available yet, for example in steam cracking, we don’t have electric cracker at scale yet … Ideally, big chemicals companies would team up and jointly pool resources and knowledge,” said Elser.

“Will that be technically feasible? I do not know; no-one knows. There will be uncertainties and there will be failures, and this is one of the areas where industry needs support form governments through innovation funds, for example.” 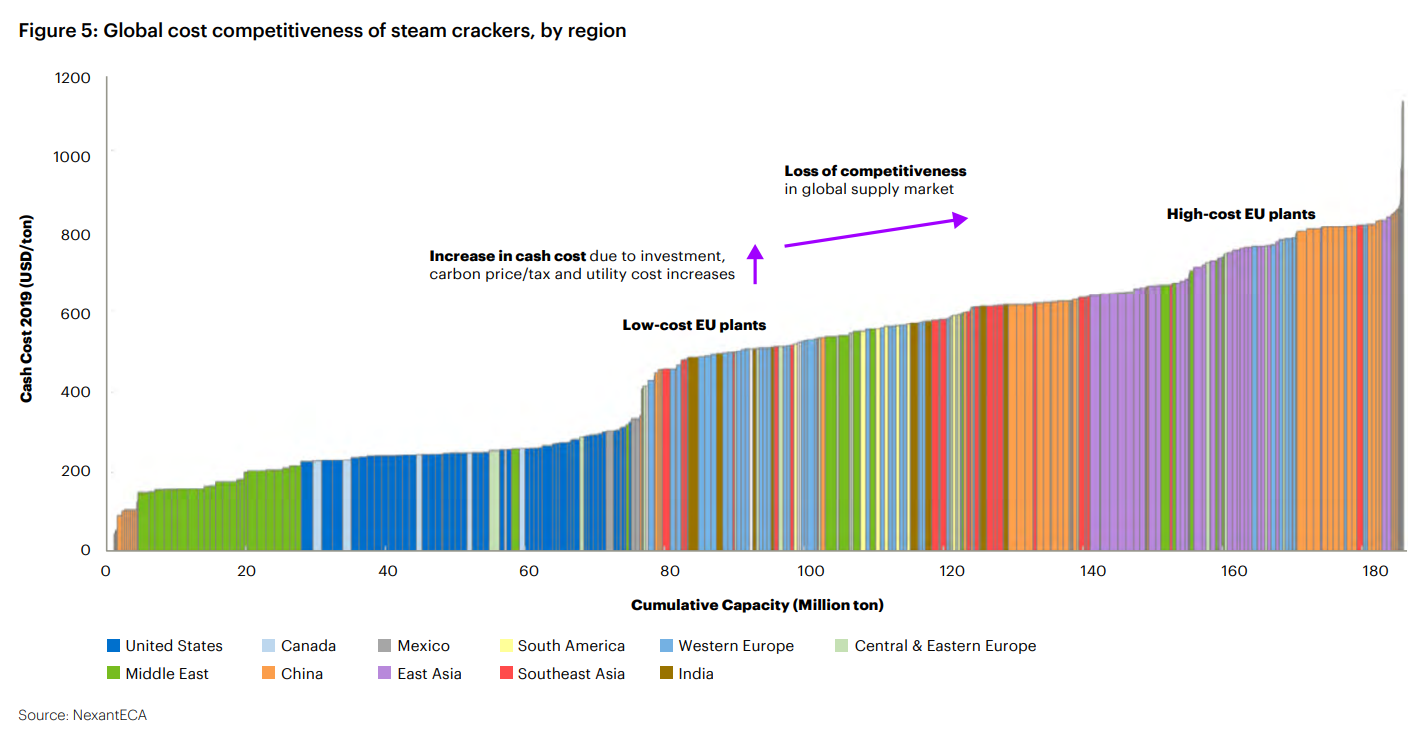 –
You can read the Accenture and NexantECA report here.