LONDON (ICIS)–European fertilizer and petrochemical producers may be the first in line to cut gas consumption as political pressure is mounting to save supplies ahead of a difficult winter.

Imports from Russia, Europe’s largest gas supplier, have been less than a fourth of its deliveries two years ago, and may stop altogether amid its stand-off with the EU over the war in Ukraine. Amid this risk, Brussels issued guidance on 20 July to reduce gas demand by 15% between 1 August 2022 – 31 March 2023 across member states, compared with the five-year average for the period.

Policymakers recommend voluntary reductions but say these would become mandatory in case of a supply emergency jeopardising the bloc’s security.

The EU’s largest consumers include households, accounting for 37%, electricity and heat generation covering around 30% and industrial consumption accounting for another 30%.

Data compiled by ICIS gas analytics show that overall, year-on-year demand has declined by 8.2% in the year to date and by 3.9% for the same period compared with the 2015-2019 average.

EU proposals for demand reduction released on 20 July indicate the industrial sector may be a priority target for major reductions, with three sectors – glass, ceramics and chemicals – consuming half of the sector’s total.

ICIS data show that industrial demand may have fallen moderately in recent months although it is difficult to identify the exact level of decline since some transmission operators aggregate consumption data for the industrial sector and electricity power plants.

Industry-specific data published by gas transmission system operators (TSOs) in the UK, the Netherlands, Germany, Italy, Belgium and France indicate that industrial demand in these countries has declined year on year by an estimated 15% in the year to date.

The fertilizer sector, one of the most gas-intensive industries, has also been one of the most affected so far. This is because with gas prices soaring more than five times the long-term average in recent months, the cost to produce ammonia and urea rose to $1,700/tonne and $1,250/tonne respectively.

This is around 60% above the current market price of these key products.

As a result, around 13 urea and ammonia plants have been forced to shut down or reduce output. Large petrochemical companies such as Germany’s BASF Ludwigshafen plant are also drawing up plans to shut down the site if gas supplies fall further.

ICIS experts focusing on the fertilizer sector estimate that as much as 40% of urea production may have been cut year on year in Europe, although the information is difficult to confirm since there is no official confirmation on specific output limitations.

In a statement to the press, Jacob Hansen, director general of Fertilizers Europe said producers may have no room to switch to other fuels.

“Maintaining a well-functioning fertilizer sector across Europe is essential to avert risk of fertilizer shortages which could have a detrimental effect on Europe’s food sovereignty,” Hansen said.

Another important side effect of the high costs and gas supply crunch has been an unprecedented change in trade flows.

Deepika Thapliyal, ICIS deputy managing editor of fertilizers said, “on urea, for the first time we are seeing Nigerian urea move into Europe. Nigeria is not usually a supplier to Europe but given the cuts in production in Europe because of high gas costs, buyers have started to look at alternate import routes, Russian urea also continues to flow into Europe (under the radar), where producers have the adequate infrastructure in place.”

On the petrochemicals side, there have been no reports of shut-downs or output reductions but producers are making detailed plans for rationing. This is particularly in Germany, where the chemicals and pharmaceuticals industry uses about 140TWh/year (around 13 billion cubic metres (bcm)/year), or about 15% of Germany’s gas consumption.

Will Beacham, deputy editor of ICIS Chemical Business said gas was mainly used by petrochemicals to generate energy, such as electricity and steam, as well as to fire furnaces for production complexes such as crackers.

Sites are able to lower operating rates significantly, but they may be forced to close if gas supplies drop so much that production becomes uneconomic or difficult from a technical perspective.

BASF’s Ludwigshafen site is the world’s largest integrated chemical complex owned by a single company. They confirmed to ICIS that it will have to shut down if gas supply collapses by more than half for a sustained period of time.

A BASF spokesperson said that “if supply were to fall significantly and permanently below 50%, we would have to shut down the production site while maintaining the necessary safety standards. The decisive factor here is how long a supply freeze from Russia would last in terms of natural gas and how quickly Germany can come up with alternative solutions.”

The company uses about 60% of the natural gas it purchases to generate energy and about 40% as a raw material to produce important basic chemicals.

If petrochemical sites are forced to close, this will affect availability of raw materials down important value chains such as automotive, construction and electronics. Disruption to industrial production would dampen economic activity, putting downward pressure on GDP growth. 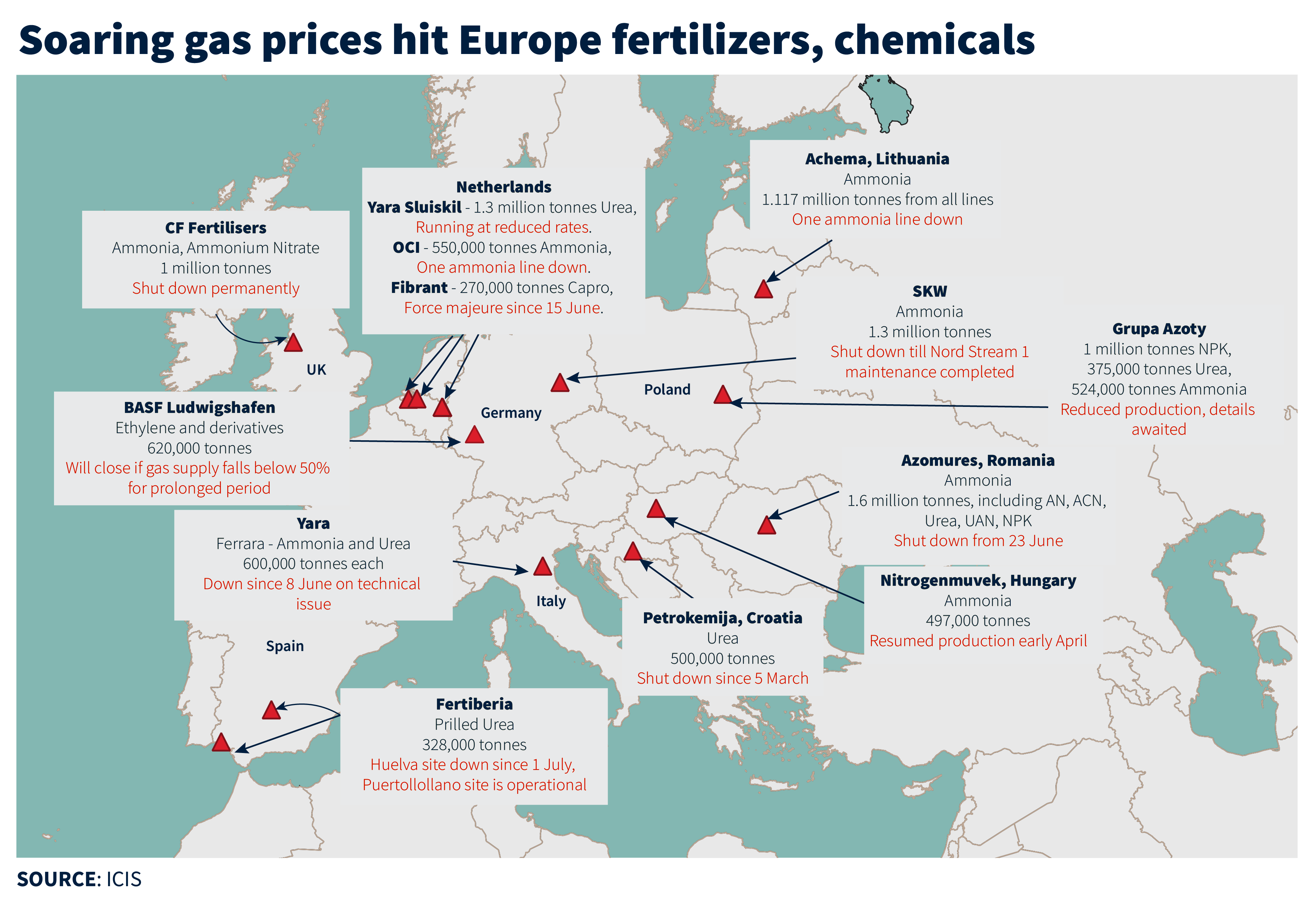 • With a share of 15%, the chemical industry is the largest industrial consumer of natural gas in Germany

• Chemical producers can substitute natural gas for other fuel stocks, such as coal, but only on a small scale

Julia Meehan, ICIS’ managing editor of fertilizers said it was clear demand destruction had taken place, but added that the peak months for buying fertilizers across Europe and the US was from September onwards.

“In September things should start improving for fertilizers. […] The problem will be curtailments in production in Europe which will mean less availability and higher prices,” Meehan said.