German chems sector under pressure from gas prices, could persist through H1 2023

LONDON (ICIS)–Germany’s chemicals industry has hit a multiyear low in business expectations due to the steep increase in gas prices, according to the Ifo Institute on Tuesday.

Gas prices have soared since the Russian invasion of Ukraine in the first quarter of 2022, as the war has jeopardised security of supply in Europe and gas flows from pipelines in Russia have come under pressure.

Business expectations for the chemicals industry fell to -44.4 points in July, compared with 11.8 points a year prior. 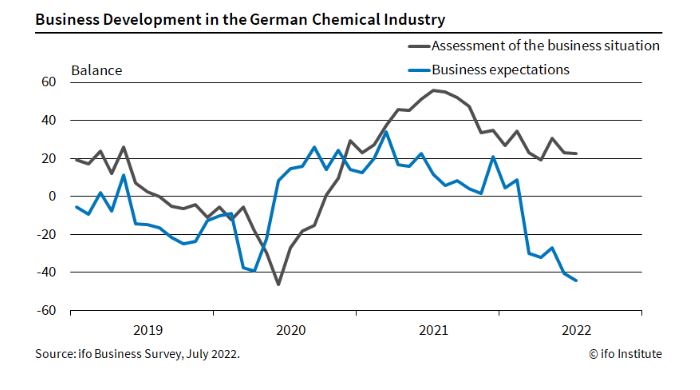 “Natural gas accounts for 44 percent of energy consumption in the chemical industry. It also plays an important role in product manufacturing: around 30 percent of all chemical products require the use of natural gas,” said Ifo industry expert Anna Wolf.

As around half of Germany’s gas imports come from Russia, producers operating in the country may be more at risk than at other European locations.

Sentiment is exacerbated by disruptions in the supply chain, with more than half of German chemicals producers experiencing material shortages, according to the Ifo, which they expect to carry over into the first half of 2023 at least.

Wolf added that import prices for other inorganic basic chemicals rose more than 65% in May compared to the previous year, with fertilizers and nitrogen compounds recording 170% increases.

In the same period, exports of chemicals products from Germany to Russia dropped 49%, and to Ukraine fell 40% in May 2022 compared with May 2021, and the impact of this is set to persist.

“There’s no sign of an imminent turnaround in international trade with Russia. According to ifo surveys, 40% of the chemical companies that responded have suspended exports to Russia altogether, while 29% cannot foresee a continuation of export relations,” said Wolf.

US BNSF to build $1.5bn rail facility in southern California

BLOG: This is the first significant chemicals downcycle for many years