SINGAPORE (ICIS)–Ethylene (C2) output in South Korea, Asia’s largest exporter, will decline in October due to cracker turnarounds but supplies in northeast Asia may not necessarily fall short of demand.

The scheduled capacity loss will be mitigated by healthy supply from southeast Asia and countries outside of Asia, and on hopes of a recovery in key Japanese exporter ENEOS Corp’s production.

More October spot supply from Asian producers is expected if upstream naphtha values remain on the downtrend while spot ethylene prices hold to their recent gains.

Further ahead in November, a supply glut in northeast Asia could resurface on Korean cracker restarts, capacity growth in China and a possible continuation in exports from the US and Europe.

Korea Petrochemical Industry Co (KPIC), LG Chem and Yeochun NCC (YNCC) will begin their cracker turnarounds between mid-September and early October, with the capacity loss peaking in October at over 200,000 tonnes.

In addition, Taiwan’s output will continue to be constrained by weak domestic downstream demand for ethylene and propylene.

Taiwan’s Formosa Petrochemical Corp (FPCC) is extending a shutdown at its No 2 cracker that was initially due to restart in the second half of September to October, in line with a prolonged outage at its downstream affiliate Nan Ya Plastics’ No 4 monoethylene glycol (MEG) unit.

State-owned refiner CPC Corp may raise cracker run rates next month, as a shutdown at a gasoline-making unit in October will help reduce its propylene surplus caused by declining domestic demand.

But the recovery is expected to be limited by the continued sluggish offtake by local propylene consumers.

For now, the producer will maintain cuts of more than 30% to ethylene term customers in Taiwan next month, broadly unchanged from September’s levels.

The continued reduced supply next month prompted some end-users to seek prompt spot ethylene and to request their term suppliers for more October shipments.

Japan’s supply is expected to rebound from the second half of September if the country’s largest exporter ENEOS resumes operation at its plant in mid-September as planned.

The company had bought back its first-half September term quantities in the aftermath of the outage, contributing to tighter supply for the front month in earlier weeks.

The 20% jump in the spot ethylene prices last week from levels two weeks ago could prompt some regional producers to further lower output of underperforming products in their downstream portfolio in favour of increased monomer sales.

The market is already seeing more Asian producers returning to the spot market to offer September and October shipments since last week.

Still, the overall recovery in cracker run rates in Asia will likely be capped by the weak downstream conditions.

Many producers would still prefer to moderate production in order to protect their margins, which have only just returned to the black for naphtha crackers. 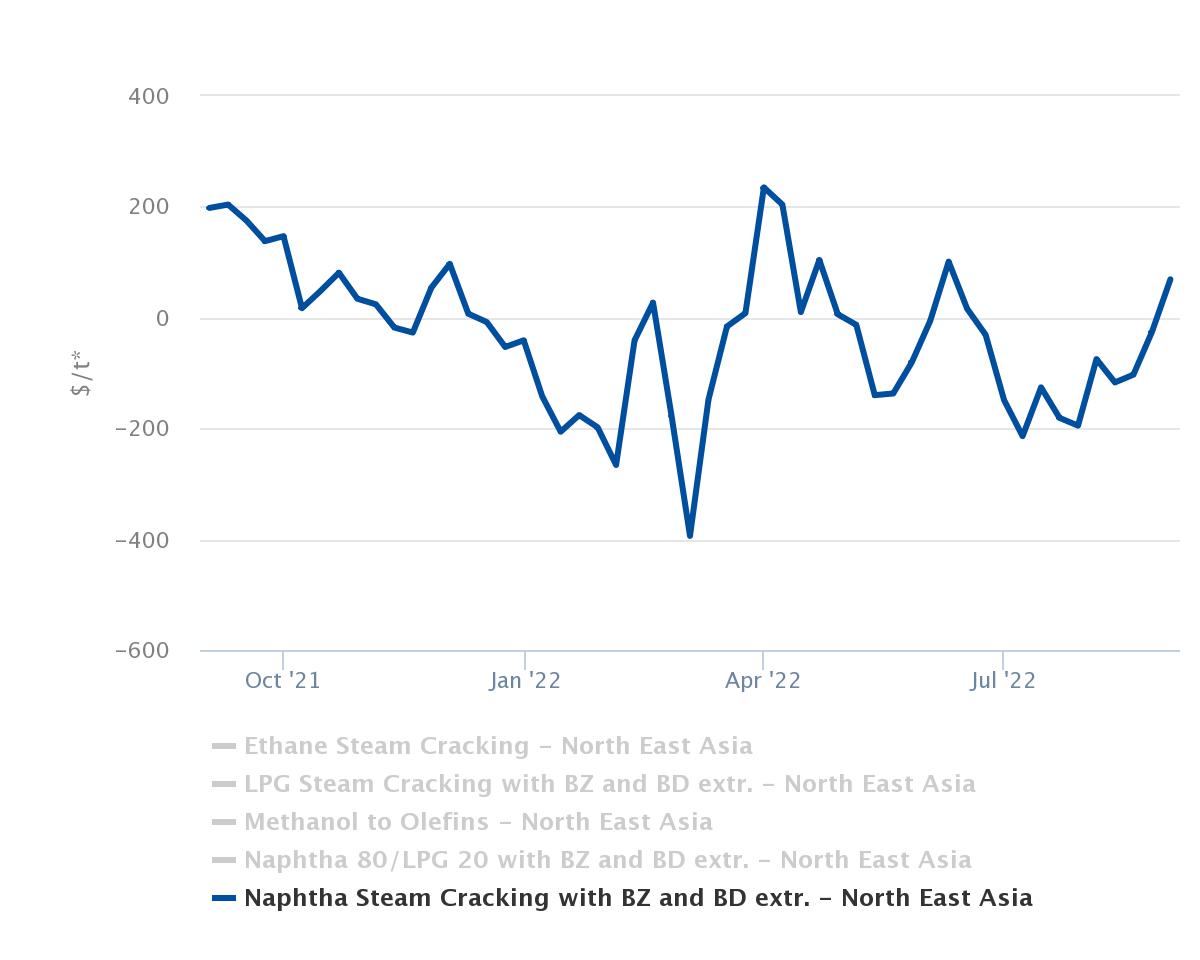 In addition, margins for propylene are still poor while the outlook for most ethylene and propylene downstream sectors remains uncertain in the face of a slowing Chinese economy.

Close to 30,000 tonnes of ethylene from southeast Asia, Europe and the US have been fixed for delivery to Taiwan and China between the second half of September and early November, helping to cushion the impact of weaker exports from South Korea in October.

Deep-sea cargoes for November and December delivery could continue to head to Asia, with the energy crisis in Europe worsening towards winter.

More producers in Europe may offload cargoes in Asia as the high energy bills and tight gas supply could cause downstream plants to shut or lower rates.

US suppliers may have to rely more on Asia as the offtake by European customers weakens.

Over 30,000 tonnes of European ethylene were already sold into southeast Asia and northeast Asia for arrival between the first half of September and early November in a sign of the emerging supply overhang in Europe.

Within northeast Asia, shipments from Korea are expected to rebound from November, as some facilities would have completed their maintenance in the first half of the month.

Shenghong Refining & Chemical may commence merchant sales by the end of the year if its cracker with a nameplate capacity of 1.1m tonnes/year starts up smoothly.

On the demand front, low end-user inventory and downstream plant restarts have continued to drive restocking activity in China this week.

Some ethylene buyers from the styrene monomer (SM) sector have resumed operation or are planning to restart their standalone plants because the recent recovery in prices on the back of low port inventory in east China have boosted margins.

Sanjiang Fine Chemicals, a key importer, is raising its ethylene oxide (EO) production in line with the restart of its upstream methanol-to-olefins (MTO) unit and as the earlier power crunch has eased with falling weather temperatures.

Spot buying in the weeks leading up to the long National Day holidays in early October will depend on whether the recent rebound in the Chinese downstream prices for commodities such as MEG, SM, polyethylene (PE) and EO will continue. 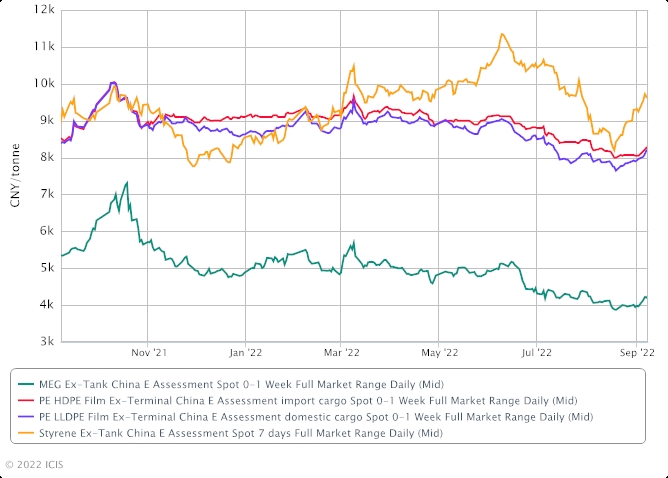 End-users are hoping to see a cyclical pick-up in the demand from their customers in September and October, and for the broader economy to benefit from Beijing’s stimulus policies.

But headwinds such as China’s zero-COVID policy and real estate slump, and global recession fears could limit the demand recovery.

A weakening yuan and lower crude futures are adding to the uncertainty in the overall chemicals market.

Click here to read the Ukraine topic page, which examines the impact of the conflict on oil, gas, fertilizer and chemical markets.