HOUSTON (ICIS)–More than 7.2m single- and multi-family residences with a combined reconstruction value of $1.6tr are at moderate to high risk of flash flooding from Hurricane Ian, which made landfall in Florida on Wednesday afternoon. 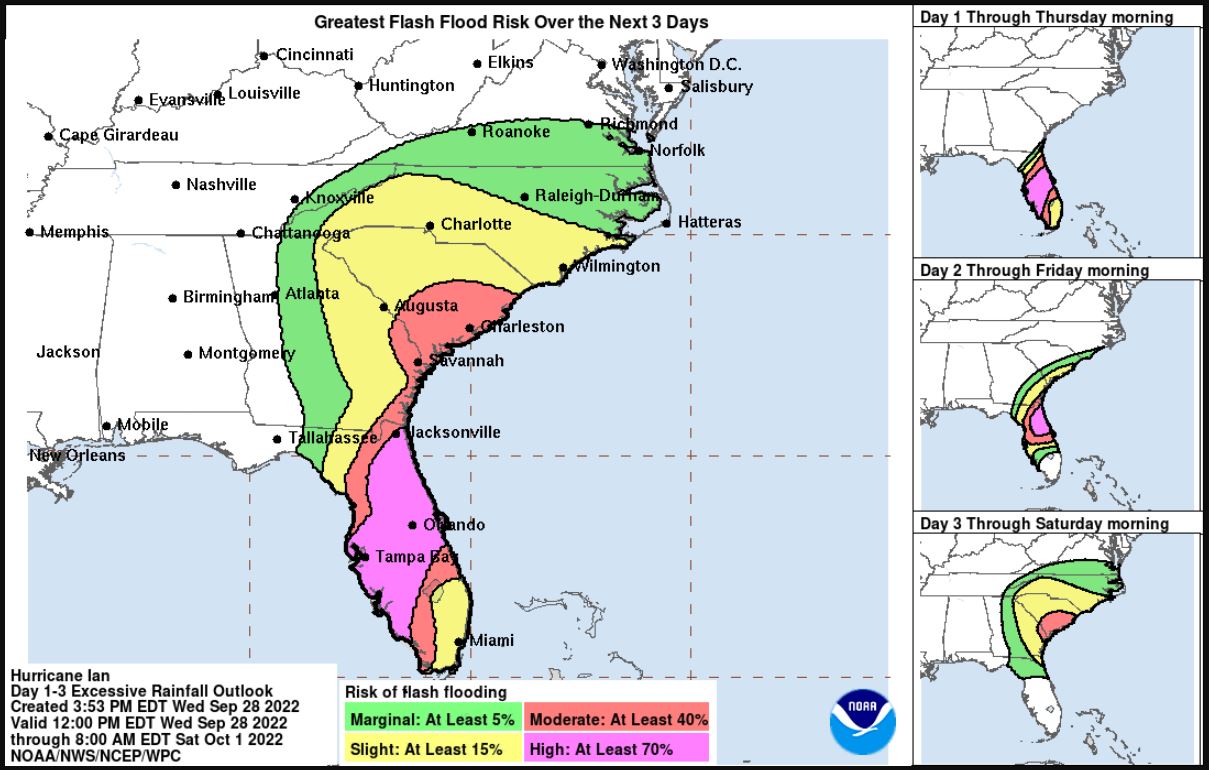 The storm had maximum sustained winds of 155 miles/hour, and brought heavy rains, but most damage is expected from storm surge that could be between 12-18 feet in some places, according to the National Hurricane Center (NHC).

Storm precautions continued to have a small impact on oil production along the western areas of the Gulf of Mexico.

Based on data from offshore operator reports Wednesday, the Bureau of Safety and Environmental Enforcement (BSEE) said that personnel have been evacuated from a total of 11 production platforms, which represents 2.11% of the 521 manned platforms in the Gulf of Mexico.

Personnel have been evacuated from five rigs, equivalent to 35.71% of the 14 rigs of this type currently operating in the Gulf.

A total of three rigs have moved off location out of the storm’s path as a precaution. This number represents 15.79% of the 19 rigs currently operating in the Gulf.

The rigs are not moored to the seafloor, so they can move out of harm’s way in a relatively short time frame. Personnel remain on board and can return to the original location once the storm has passed.

From operator reports, BSEE estimated that approximately 9.12% of the current oil production and 5.95% of the natural gas production in the Gulf has been shut in.

Shut-in production information included in these reports is based on the amount of oil and gas the operator expected to produce that day.

The US fertilizer industry has been watching the tropical threats closely as Tampa is a key centre with both trading, shipping and production operations in the area.

Major domestic producers, including both Yara and Mosaic, have facilities in the surrounding region.

“All of our Florida locations have been secured, with some fully evacuated while minimal staff remain at other sites,” Mosaic said in a statement Wednesday morning.

Ascend Performance Materials has a plant in Pensacola, Florida, that produces nylon 6,6 as well as feedstocks hexamethylene diamine (HMD) and adipic acid, according to the ICIS Supply and Demand Database.

Pensacola is located on the far western edge of the state and is not within the projected path of the storm.

Huntsman International produces maleic anhydride in Pensacola, and Reichhold Chemicals has production sites in Pensacola and in Jacksonville, Florida.

Jacksonville is on the Atlantic coast side of Florida and is within the projected path. Storm impacts are also expected into southern Georgia and parts of South Carolina.

Hexion produces epoxy resins and phenolic resins in Lakeland, Florida, according to the database. Lakeland is about 35 miles east of Tampa.

Ian is expected to cross Florida and make another landfall by Friday, threatening the ports of Savannah, Georgia, and Charleston, South Carolina, according to the NHC.

The Port of Savannah was still open as of mid-afternoon on Wednesday, according to a spokesperson for the port.

US operator Kinder Morgan said on Wednesday that the 2.5mtpa Elba LNG in Georgia was expected to remain online as Hurricane Ian passes through the US southeast region.

A Kinder Morgan spokesperson said the company planned to continue normal operations for both the Southern Natural Gas and Elba Express pipelines into the export plant.

The 173,000cbm Murex was the last vessel to load from Elba on 25 September. No other vessels were expected to load from the US plant in the near term.

CHEMICALS USED IN CONSTRUCTION
The damage and efforts to rebuild can translate to increased demand for many chemicals and polymers that are used in the construction sector.

The white pigment titanium dioxide (TiO2) is used in paints.

Blends of aliphatic and aromatic solvents are also used to make paints and coatings.

For polymers, expandable polystyrene (EPS) and polyurethane (PUR) foam are used in insulation.

Polyurethanes are made of methylene diphenyl diisocycanate (MDI), toluene diisocyanate (TDI) and polyols.

Thumbnail image from the National Hurricane Center shows projected path of the storm.