LONDON (ICIS)–Falling gas prices could reignite some interest in European industrial output but a combination of high operating costs and sluggish demand, reminiscent of the 2008 financial crisis, is likely to slow recovery this year, according to ICIS research.

Europe’s petrochemicals and fertilizer sectors were lashed by record gas and electricity prices in 2022, forcing many companies to stop or reduce production.

With costs falling in the latter part of the year, some fertilizer production started to ramp up.

Even so, latest figures from ICIS show that 25.1m tonnes/year of chemical and fertilizer production remain offline or running at reduced operating rates as of mid-January. 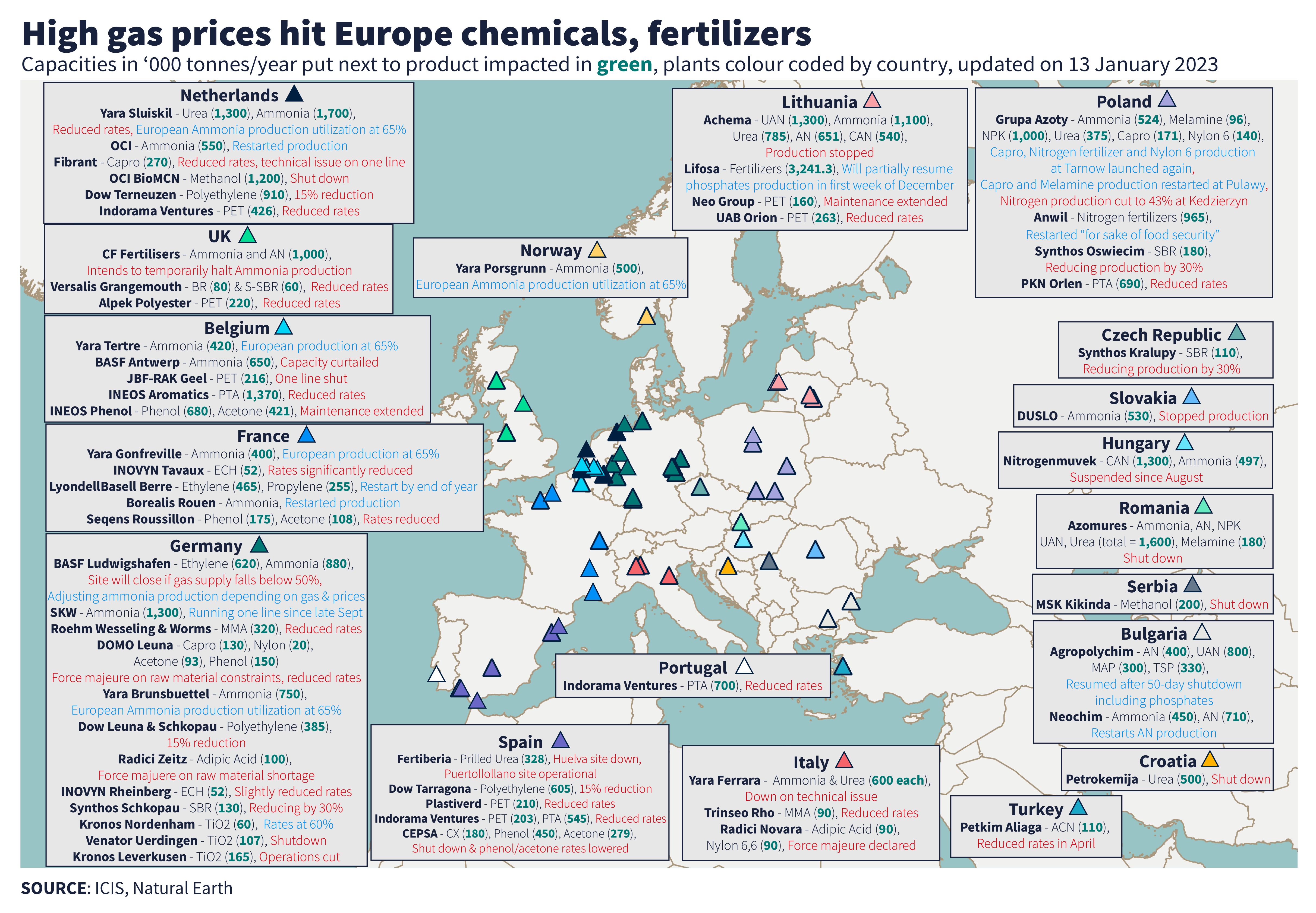 More specifically, only around 55% of the petrochemicals and 65% of fertilizer capacity is in use, far below other regions globally. 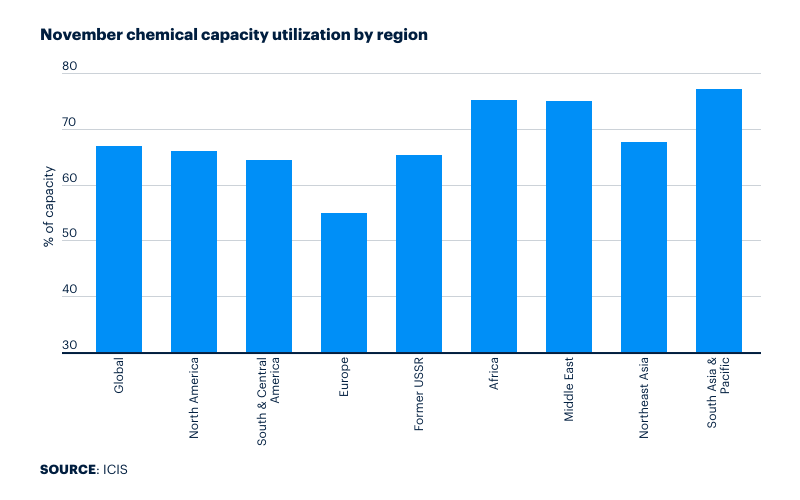 Gas prices falling to a 16-month low could incentivise some ramp-ups in urea and ammonia, the basic ingredients in fertilizer production, but these may be limited.

ICIS Analytics data show that notional ammonia profit margins are now at the highest levels since May 2020.

Should ammonia plants return to a level of 80% utilisation, the step-change would be equivalent to 80GWh/day (7.5million cubic meters/day), Tom Marzec-Manser, head of ICIS gas analytics said.

If 100% of ammonia plant returned to operations the rise in gas demand – relative to 65% utilisation – would be 205GWh/day, he said.

For now, however, data on the ground remains more subdued.

There are reports that a nitrogen plant in southern Europe is expected to ramp up in the third week of January, but this is yet to be confirmed.

On the other hand, Norway’s Yara, one of the world’s largest fertilizer producers, told ICIS that the fundamentals to produce ammonia in Europe remain unprofitable.

The situation is unchanged in the European petrochemicals sector where the odds of an imminent recovery are low for the same reasons.

Much of what will happen this year will depend on a number of factors linked to macroeconomics and geopolitics, gas market fundamentals as well as drivers related to specific industrial sectors.

MACROECONOMICS
The picture for the global economy in 2023 remains rather gloomy, with the World Bank predicting a recession for 2023 amid expectations of global GDP growth of 1.7%, one of the lowest levels since 1993.

While growth is likely in the Middle East, North Africa and South Asia, there is a less encouraging outlook for Europe, where the International Monetary Fund (IMF) revised down forecasts for the eurozone from 1.2% to 0.5%

On the other hand, the European Central Bank expects the EU inflation rate at 6.3% for 2023 but likely to drop to 3.4% from 2024 in line with falling energy costs.

Much will hinge on the outlook for Russia’s war in Ukraine and the recovery of the Chinese economy as the country lifted COVID restrictions, considered to be key drivers not only for the global economy but also for energy consumption.

LNG SUPPLIES
Apart from concerns related to stagflation, industrial consumers are also monitoring energy supplies and costs, which had been very much at the heart of the problems faced in 2022.

With Russian gas supplies falling much below 10% of Europe’s total imports compared to 40% in 2021, the fallback option has been imports of liquefied natural gas (LNG) sourced globally and a ramp-up in additional supplies from neighbouring producing countries such as Norway.

Inflows were strong as the new year started, pressuring gas prices but 2023 is a year where the global LNG market is likely to stay tight, even though, admittedly, more comfortable than most people would have expected a few months ago.

Alex Froley, ICIS LNG market analyst says forward gas prices over the next two years have dropped to levels around $20-24/MMBtu. This is far lower than prices of $50-60/MMBtu and higher seen last summer, but still three or four times long-term averages.

The mild start to winter in Europe preserved gas in the region’s storage facilities, taking pressure off the forward curve, and allowing European ICIS TTF gas prices to drop slightly below East Asia Index prices for the near months.

“Europe’s gas storage is at near record levels for the time of year, despite the lack of Russian pipeline flows. The premium of Asian prices could draw some more cargoes back to East Asia, from Middle East producers if not the Atlantic Basin,” he says.

However, were prices to fall much further this could start to boost industrial gas consumption in Europe and allow increased buying from both East Asian and South Asian countries like India, Bangladesh and Pakistan.

“So European gas may find something of a floor around the current level to avoid too much additional gas being drawn away from the region,” Froley argues.

Many observers will be watching demand in China, which lifted COVID restrictions in December.

Froley does not expect an immediate increase in LNG demand, as in the short-term there could be a rise in COVID infections that continue to slow the economy, while the price of spot LNG still remains expensive compared with alternatives such as coal.

The 15.0m tonne/year US Freeport LNG plant, one fifth of US export capacity, remains out of action after a fire in June 2022, with no immediate restart in sight. The plant can’t restart until it has clearance from regulatory authorities, which need to be reassured about the safety of the company’s operating procedures.

In the very short term, it is possible that cold weather could boost demand in Europe, although EU weather forecaster Copernicus indicates relatively mild weather until the end of February.

INDUSTRIAL RECOVERY
Energy and macroeconomics are critical drivers of industrial production, but specific drivers related to petrochemicals and fertilizers are also likely to influence the extent of recovery in 2023.

Will Beacham, ICIS Chemical Business deputy editor says chemical producers in Europe are concerned that gas prices could rebound in case of a cold snap later this winter and remain fearful of poor demand conditions during 2023.

“European chemical companies were hammered by high costs and falling demand in 2022. Earlier in January, Germany’s Covestro warned that it would fall to a full year net loss for 2022 of €300m. It blamed high energy and raw material costs and weakening European and global economies, as well as depreciation of assets,” he said.

Germany’s BASF also warned this week it expects chemicals earnings for 2022 to be below analysts expectations and flagged a full year net loss.

China is also a major wildcard, Beacham says, as companies are watching for signs of recovery although fears of an ongoing wave of COVID-related deaths mean there is a little confidence in an uptick in activity in the short term.

Deepika Thapliyal, ICIS deputy managing editor for fertilizers, says demand for urea is non-existent, with warehouses across Europe being full.

With gas prices falling sharply, urea prices have also dropped to an estimated low-mid-€500s/tonne ($20.00/MMBTu) FCA (Free Carrier), less than half the record levels of €1,100/tonne FCA touched in April 2022. 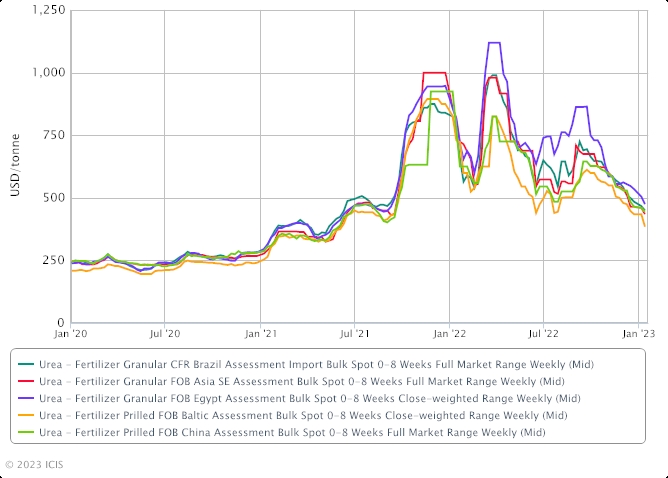 Thapliyal says the price of gas where producers would be incentivised to ramp up output would be below $40.00/MMBTu but the fact that we are yet to see a recovery indicates that there is no demand at all for urea, and suppliers are struggling to place product.

“Even when demand is back, it is likely to be slow as buyers are in no rush,” she says.

“European importers are wary to step in as several of them are sitting on long positions, which were bought at higher levels. For new business, many importers will separately prefer to sell to customers first, and then import to cover the position.”

Much of the fertilizer production recovery in Europe will depend on demand levels across the globe as well as competition from other suppliers, including Russia.

Thapliyal says There are several urea cargoes on offer in Europe, including two believed to be from the US. But with gas prices on a downward trend, fertilizer buyers expect production in Europe to pick up and increase from around 60-65% right now.

Meanwhile, neither India nor the US is stepping back into the market, indicating that the season is delayed.

Demand from the US usually starts in January but bad weather appears to be causing delays. Furthermore, if consumption remains subdued globally, the US may absorb the overhang, further limiting the odds for growing demand.

Thapliyal says an Indian tender is likely to be announced in February, for shipment in March. The country is expected to buy over a million tonnes, but prices would likely be competitive given the lack of demand anywhere else.

The views are echoed further down the chain.

Scott Codgill, commercial product manager at ICIS sister company Proagrica Ag Solutions, said it was doubtful there would be a large increase in demand as most fertilizers had been prepaid by consumers although not all applied.

Ammonia traders, meanwhile, said the farming season might start earlier this year because of mild temperatures.

However, Adam Joslin, customer success manager at Proagrica Ag Solutions, said farmers might hold off with most applications of nitrogen, for example, unlikely to happen until late February.

It is possible, he thinks, that many farmers would still bide their time in expectations for more clarity on fertilizer costs, while also enjoying healthy margins from crops. In the UK for example, he says, the price of wheat is £225/tonne compared to £150/tonne in 2020.

Much of what will happen in the fertilizer sector in 2023 will also depend on Russia.

Exports from Russia into Europe increased, anywhere between 10-20% for urea, as Russian fertilizer as such is not sanctioned.

Some Russian oligarchs are sanctioned, but there has been a substantial change in ownership of fertilizer companies in Russia, with product still flowing into Europe. Russian fertilizers account for around 5-20% of market share in Europe.

Buyers dependence on Russian material increased in mid-2022, when prices of urea touched record highs after the start of the war. Russian fertilizer is generally available at a discount to other mainstream origins.

On the ammonia market, notional ammonia profit margins are now equivalent to $12.945/MMBTu, the highest they have been since 25 May 2022, says Tom Marzec-Manser, head of analytics.

A similar picture may also appear on the ammonia market, where there are plans to bring back into operation the Tolyatti-Odesa ammonia pipeline, which shut down a day after the start of Russia’s war in Ukraine.

The pipeline pumps around 2.5million tonnes of ammonia per year.