Trade reported to ICIS on the Summer ’21 Baseload product at the UK power market in recent sessions has stirred suspicion that the UK’s chancellor is likely to make an announcement on the future trajectory of the carbon price support (CPS) rate in next week’s budget.

The CPS rate, which is charged on top of the European emissions trading system (ETS), is priced into UK wholesale electricity contracts. Changes in the rate have caused re-evaluation of the curve in the past (see EDEM 19 March 2014).

Trade reported to ICIS on Summer ‘21, if hedged speculatively on expectations of an announcement, suggests participants are expecting the rate to be frozen or more likely lowered.

The spread – indicative of the crude profit margin for gas-fired generation excluding emissions costs – traded at £7.00/MWh, almost half the value of the current front summer spread.

“That must have been a fund [trading],” one utility trader said. “I just find it hard to accept that a utility would do that.” 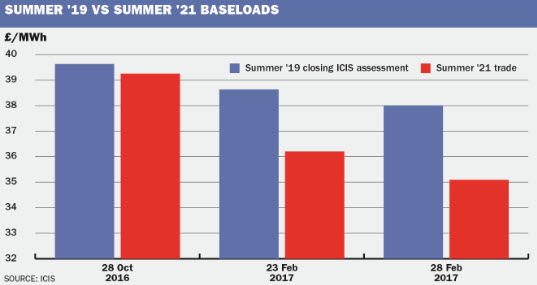 Such a shift in the shape of the curve, if based for example on re-estimations of new renewable generation coming online in the early 2020s, seems excessive, according to one source at a hedge fund.

“There is probably some risk that CPS disappears,” he said. “I can’t see it happening just yet though.”

But a hedge on the removal of the CPS would make sense, according to another source at a supplier, considering speculation around changes in the CPS before previous budget and autumn statements.

Political lobbying by the largest companies on issues such as the CPS and discussions with government dissuades speculative trade on the far curve, the hedge fund source added. “I would expect to be at an information disadvantage,” he said.

The rate is currently frozen at £18.00/tCO2 until 2020 and set to rise with inflation from 2020 until 2021. But no detail of its trajectory beyond April 2021 has been published to date and industry has been placing pressure on the government to confirm the future rate sooner rather than later (see EDEM 2 February 2017).

Energy minister Greg Clark said in January that more information on future government tax and subsidy mechanisms for the UK energy market would be released in a matter of months.

The Treasury, which has responsibility for the CPS rate, was asked to comment but had not replied at the time of writing. henry.evans@icis.com