The world’s largest LNG supplier, Qatar, on Wednesday sought to downplay the trade impact of this week’s diplomatic incident with Saudi Arabia, the UAE, Bahrain and Egypt.

Spot LNG prices have so far not reacted, although the market has focused on whether LNG trade between Qatar and Egypt, the UAE will be affected, as well as potential shipping disruption to Qatari vessels.

The effect so far on LNG has been insignificant compared to the logistical issues affecting diverted flights and a halt in food deliveries to a country highly dependent on imports.

ICIS here considers the key areas of impact within the LNG market.

The most immediate impact on the Qatari fleet was the removal of vessels from the east coast of Fujairah, a key bunkering location. Qatari vessels also wait there at offshore anchorage before loading at Ras Laffan.

Three ballast Qatari vessels left Fujairah shortly after the news broke on Monday, according to LNG Edge. These are now waiting close to Ras Laffan instead.

All vessels carrying Qatari cargoes, including those chartered by non-Qatari companies, will be banned from bunkering at Fujairah, according to a ship broker on Wednesday.

However, the UAE has since limited its ban to vessels carrying the Qatari flag and vessels owned or operated by Qatar, removing a reference to vessels arriving from or destined to Qatar, according to local media.

Bunkering is typically carried out twice every three months, the source said.

Gibraltar, Singapore and Oman could offer alternate bunkering locations. But this could add extra time and cost to the operation depending on the route taken by the vessel.

A total of 17 laden and ballast vessels are currently sitting outside Ras Laffan and some sources have questioned if the movement away from Fujairah will lead to congestion near the LNG production complex.

Access through the Suez Canal is vital for Qatar to deliver cargoes into Europe and the Atlantic basin.

Initial reports that Egypt may attempt to block the route appear overblown, as the canal is protected by the Constantinople Convention of 1888 which states it must always be open to any vessel, regardless of flag, and even during a state of war.

It is beyond the remit of the Egyptian government to close the canal.

But Egypt could reduce the canal-fee discount offered to LNG ships which would make transit for Qatari vessels more expensive, according to a research note from the Oxford Institute of Energy Studies.

More locally, Qatari vessels can gain access past the UAE and even Oman by using the Strait of Hormuz in Iran’s territorial waters. 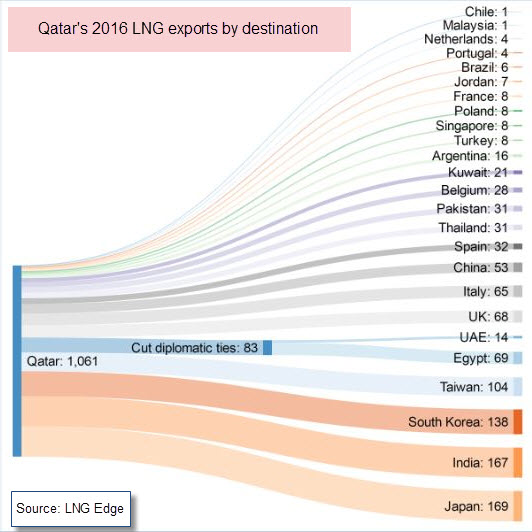 Of the countries to sever ties with Qatar, Egypt is by far the most significant importer of Qatari LNG.

Over 2 million tonnes of Qatari LNG have already been delivered to Egypt this year, sold by intermediary traders that charter their own vessels and lift cargoes from Ras Laffan rather than by a direct supply agreement between the two countries.

One trader working for a company that supplies cargoes to Egypt said he did not expect disruption to Qatari-sourced volumes.

The last delivery of a Qatari-sourced cargo to Egypt was on 2 June. LNG Edge shows that three vessels carrying Qatari cargoes could berth at Ain Sukhna in the next week based on current positioning and charterers.

Egypt has been taking in at least one Qatar-sourced cargo per week in recent months so it should soon become obvious if the diplomatic incident has changed this relationship.

Qatari supplies continue to transit the Suez Canal with the Q-Flex Al Ruwais close to exiting the canal on Wednesday afternoon and scheduled to deliver under long-term contract to Poland’s PGNiG on 19 June, according to LNG Edge.

That journey is a northerly transit through Suez. On Tuesday, the 149,000cbm Al Daayen made the route south through Suez after delivering a cargo into the Italian terminal at Rovigo.

The scale of the Qatari LNG portfolio means it is not feasible to draw a connection between a possible reduction in cargo supply into one region with an increase elsewhere.

In the absence of any physical barriers to supply, Qatari cargoes will continue to flow into Europe under both a contract and flexible basis.

Qatari vessels have at times headed round the Cape of Good Hope instead of passing through Suez. This route would add an extra 10 days to a cargo route from Ras Laffan to the UK’s South Hook terminal and take 25 days rather than 15 days, according to the LNG Edge shipping calculator.

Some large oil and gas companies have said they do not see an impact on the global LNG market. Most notable was US ExxonMobil, a major stakeholder in Qatari gas and LNG projects.

It is too early to make a judgement on any long-term impact on Qatar’s role in the LNG market but foreign investment could be at risk if diplomatic conditions do not improve.

“There are some concerns over how a company would manage its relationship with Saudi Arabia and the UAE as they are both larger oil producers than Qatar,” said Andy Flower, an independent LNG consultant.

The investment process for Qatar’s planned debottlenecking of its LNG infrastructure, announced at the end of May, has not yet started but is a sign that Qatar intends to compete for global market share as new US and Australian projects come online. ed.cox@icis.com, josie.shillito@icis.com