Russia’s Nord Stream 2 gets final permit, flows to start in 2020

LONDON (ICIS)–Russia’s Nord Stream 2 pipeline could start sending gas to Germany from as early as the end of the first quarter of 2020, after it received the last construction permit required from Denmark on Wednesday.

With this additional 55bcm export pipeline coming online, seven-year high storage levels in the EU and abundant LNG supply, a more bearish outlook for European hubs in 2020 is more likely, regardless of how key Russia- Ukraine transit talks move on.

Wholesale gas prices at the benchmark TTF hub were weak at the time of writing on Wednesday, influenced in part by the announcement from the Danish Energy Agency.

The market’s losses on Wednesday were not restricted to products overlapping with Nord Stream 2’s commissioning date, with January ‘20 for example also being sold down, making it difficult to cite the announcement as a fundamental driver and weakness across the wider energy complex also a factor.

But the announcement may have weighed in to underlying bearish sentiment influencing the whole forward curve.

Uncertainty over a potential delay to Nord Stream 2 and the expiry of Russia’s transit contract with Ukraine on 31 December had supported Q1 ’20 offsetting, to some extent, the overall bearish market sentiment due to LNG oversupply and full storage sites across Europe. 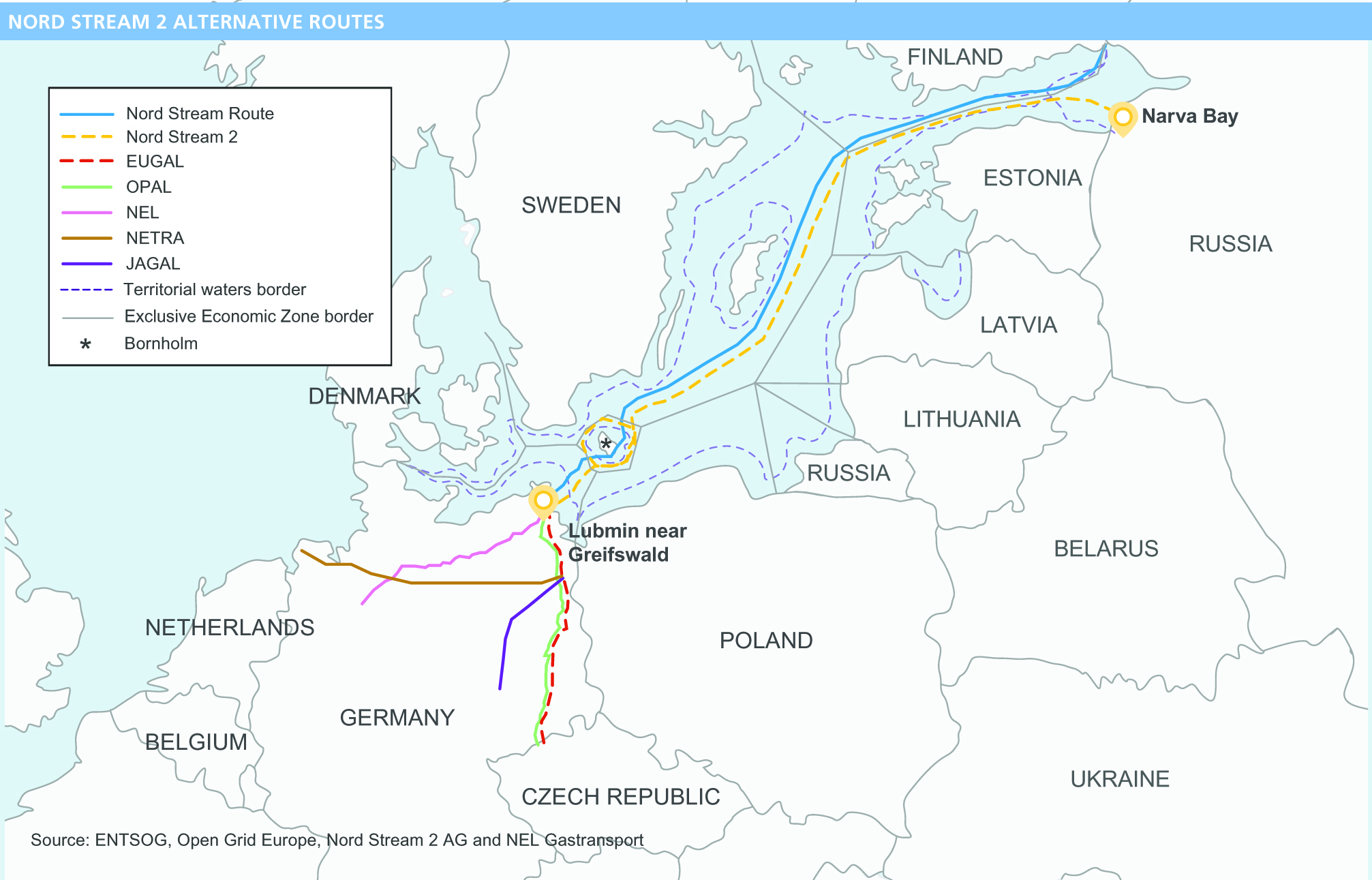 All countries crossed by Nord Stream 2 have now issued a permit and “pipelay has been completed in Russian, Finnish and Swedish waters, and for the most part in German waters. The construction of both landfall facilities in Russia and Germany is nearing completion,” Nord Stream 2 AG, the pipeline’s developers, said in a statement on Wednesday .

The pipeline is made up of two parallel lines with a total length of 2,460km. More than 2,100km had already been laid as of Wednesday. The Danish part of the pipe southeast of the Bornholm Island covers 147km on each line and Gazprom previously said it can be built in five weeks.

However, the construction phase for the pipes in Danish waters is expected to collectively amount to approximately 115-125 days, according to the Danish Energy Agency’s permit issuing document . 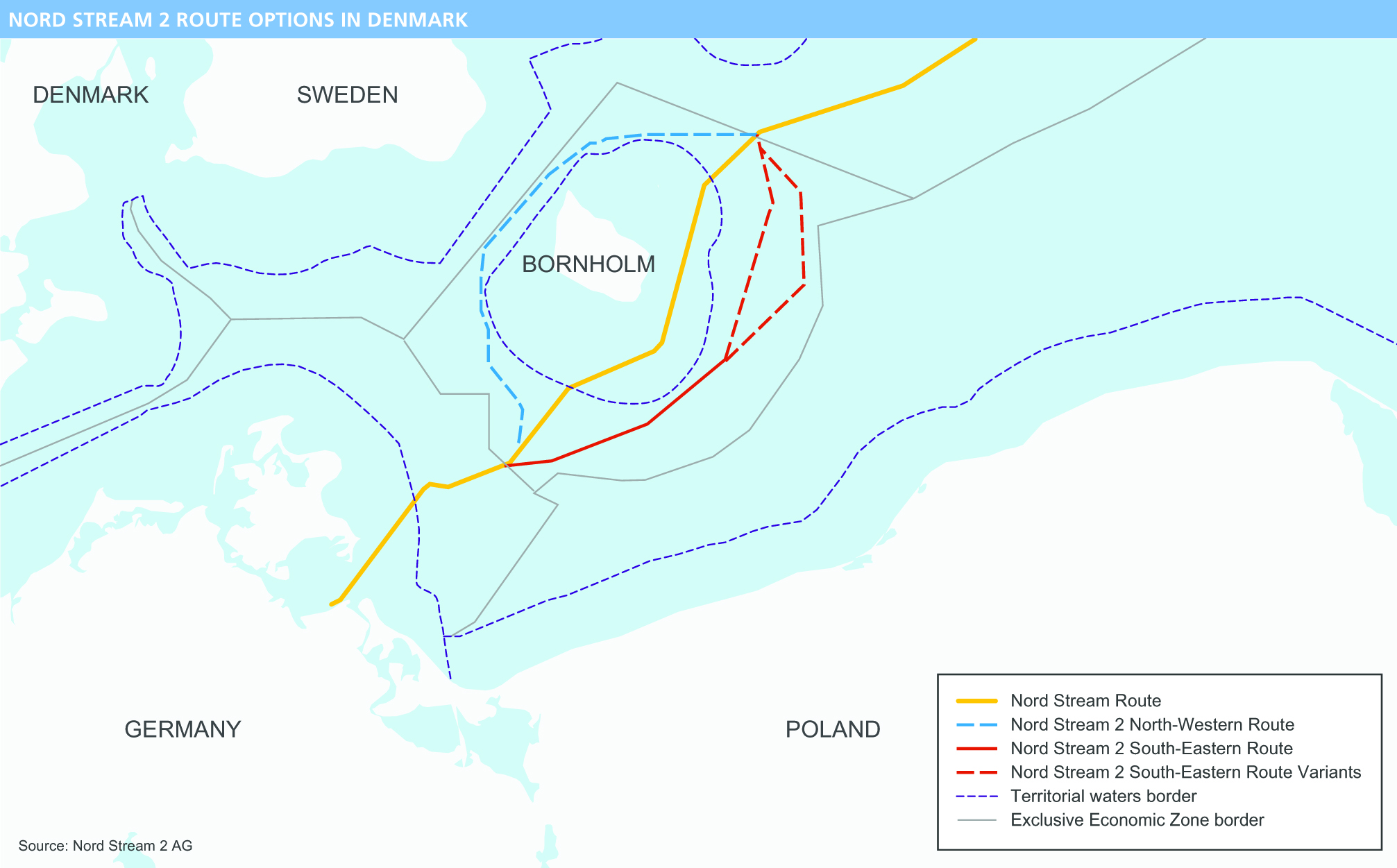 “Construction work for the first of the two parallel pipelines is expected to commence in early 2020, with a view to completion for the transport of gas during the second half of 2020,” the document also stated, which could mean commercial flows are not likely to materialise until the second half of next year, with ramp-up towards full capacity likely to be gradual.

Pipe-laying works can start four weeks after the permit has been issued, according to Danish law, which takes us to 27 November.

Vessels currently laying the pipes on other sections can lay 3km to 4km a day on average, which means if they kept laying pipes at the same speed they would finish the Danish part in 73-98 days, which would put completion sometime between 5 February and 4 March.

However, this speed may sometimes be higher, as one of the pipe-laying vessels, Solitaire, has already shown it is able to lay 5km per day .

There is around 66km left to build outside the Danish section, which means most if not all vessels could be available to build the Danish part by the time the permit can be used and construction can start on 27 November.

The fundamental outlook for the market is now more bearish, with the Danish permit confirming Nord Stream 2 should start flowing gas to Germany some time around the end of the first quarter, or possibly in the second quarter, of 2020.

European storage was almost 98% full on Wednesday, which means the bloc is prepared to face potential cold weather until the pipeline comes online. Member states have been filling up their storage facilities in preparation for potential disruption of supplies via Ukraine and the uncertainty that loomed over Nord Stream 2’s start date.

An existing transit deal between Russia and Ukraine ends on 31 December and the two parties have failed to reach an agreement for deliveries beyond this date.