LONDON (ICIS)–The European Parliament called on the EU to stop the Nord Stream 2 project immediately in a resolution reacting to Russian opponent Alexei Navalny’s recent arrest. The text was adopted on 21 January with a large majority of 581, 50 against and 44 abstentions.

The EU must stop the completion of the Nord Stream 2 project immediately, the text states.

The European Parliament resolution is not binding, and the matter is now in the hands of the European Council which needs to decide whether to take action on it or not. ICIS contacted the Council who could not say yet whether and when they will discuss the matter.

Nord Stream 2 is a direct pipeline between Russia and Germany under the Baltic Sea. Once finished, the project will have the capacity to carry 27.5% of Russia’s yearly piped gas supplies to Europe, based on volumes sent in 2018 and 2019. Its capacity is sufficient to satisfy almost 11% of the EU’s annual gas needs based on 2019 demand, data collated by ICIS shows.

Members of the European Parliament already adopted a resolution in which they called for the halt of Nord Stream 2 in September following the poisoning of Navalny . The Russian opponent was poisoned with a nerve agent in summer 2020 and spent his recovery time in Germany. He was arrested earlier this month upon his return to Russia.

December 2019: US sanctions forced the project’s Swiss-owned pipelayers to withdraw from it and leave around 160km of pipes to lay. The project was initially planned to come online by the end of 2019.

15 January 2021: pipelay was planned to resume in Denmark with the Fortuna from 15 January, according to a notice to mariners from the Danish Maritime Authority. But the vessels mentioned in the notice were not on the construction sites on that day, vessel tracker MarineTraffic showed, indicating that pipelay had not resumed yet.

19 January 2021: the US State Department included the Fortuna in its sanctioned entities.

22 January 2021: the project promoters indicated they still planned to resume pipelay in accordance with the notice. The vessels mentioned in the notice, pipelayer Fortuna, assisted by offshore supply ship Baltiyskiy Issledovatel and rescue vessel Murman, were closer to the construction sites indicated in the notice (see map). The document mentions that other auxiliary vessels will take part in the works. Other Russian offshore supply vessels such as Ivan Sidorenko and Katun were also closer to the construction sites, which indicates they may be auxiliary vessels. A phone call took place between the president of the European Council Charles Michel and Russian president Vladimir Putin, in which Alexei Navalny’s arrest was discussed. It could not be confirmed whether Nord Stream 2 had also been discussed. 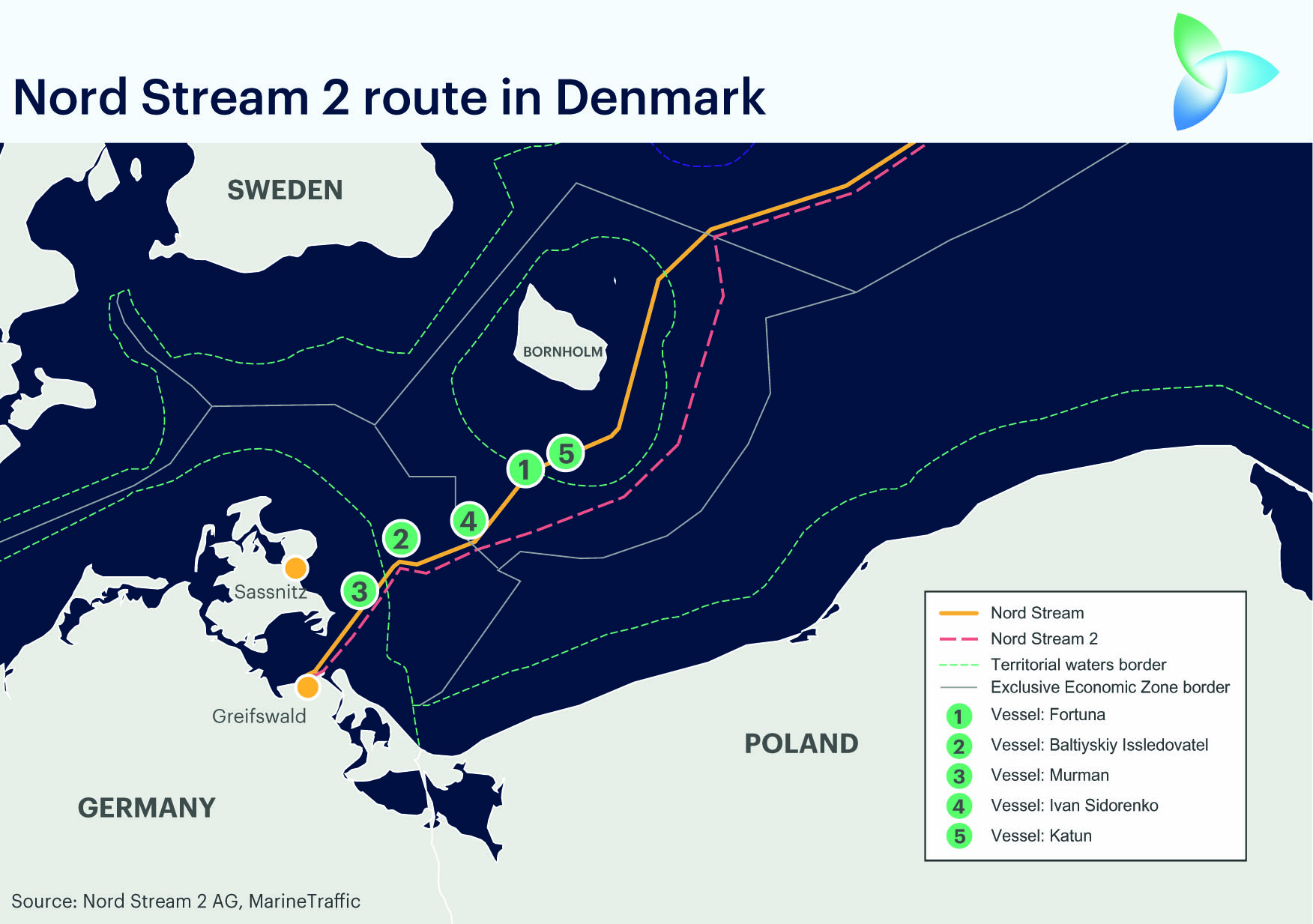 In a Eurobond prospectus in January, Gazprom wrote there is a risk that the project may be suspended or cancelled, ICIS understands. The risk seems to grow taking into account all political activity around the project, a source familiar with the matter told ICIS. Gazprom owns the project and provided half of the €9.5bn financing. Gazprom is Russia’s state-owned gas producer.

Another Nord Stream 2 investor, German Uniper, had already announced such risk in August 2020. In case the project cannot be completed, Uniper may have to impair the [€950m] loan provided to Nord Stream 2 and forfeit the planned interest income, Uniper then said.