Whereas the price of traditional PET feedstocks fluctuates with the price of oil, wood pulp feedstock prices tend to be stable and across geographic regions, said the CEO.

“One of the benefits of wood-based feedstocks is that in a given region, the price of [pulpwood] timber is actually very consistent. It’s not a globally traded commodity in the way we’re used to in the petrochemical industry,” said John Bissell, founder and co-CEO of Origin Materials, in an interview with ICIS.

“As a result, we can forecast pricing for our customers over pretty long periods of time because our cost of inputs is pretty similar. There’s not a lot of volatility in these things,” he added. 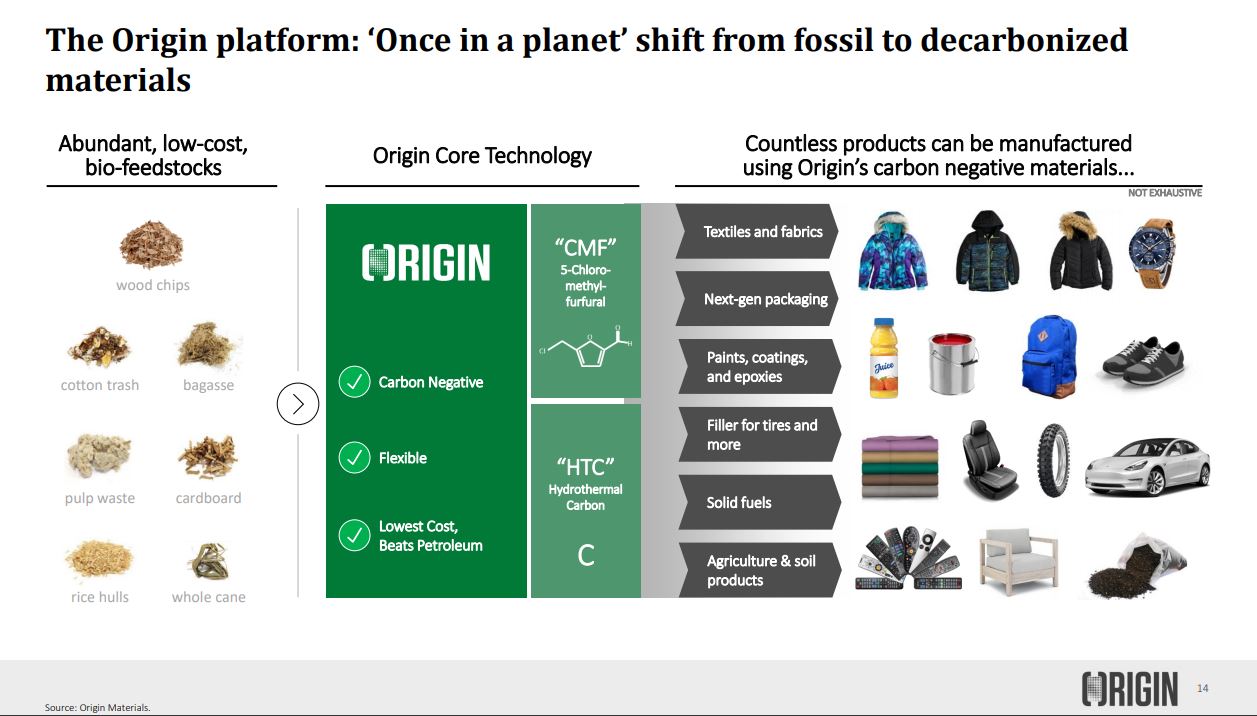 Pulpwood timber is structurally different from lumber used in construction – the latter of which can see major price fluctuations. Pulpwood is typically from younger trees versus lumber.

“We think one of the primary values we can provide over the long term to our customers is consistent pricing, predictable pricing. You just can’t do that if you’re dealing with petroleum as your feedstock,” said Bissell.

Origin Materials has 5-year and 10-year contracts with customers, and a total of around $1bn of signed contracts along with about $400m of contracts under negotiation, according to the company.

These contracts are “tightly collared or in some cases close to fixed”, said Bissell.

Depending on the price of crude oil and traditional feedstocks, the cost of PET ultimately produced from the wood-based process can either be at a premium or a discount to petroleum-based PET.

Customers ultimately prefer stable, predictable pricing over the long run, rather than a set premium or discount to the prevailing price, the CEO noted.

“The natural thing to say is, ‘Why don’t we just pay as a discount or premium to petroleum-based  indices?’ But they don’t want the volatility either. So if you’re just taking something that doesn’t need to have [much] volatility in it, and just tacking it to an index to sort of ‘borrow’ the volatility from the index, it’s a bunch of destroyed value,” said Bissell.

“So we try not to do that. Often there’s a bit of a modest escalator or de-escalator, but again, tightly collared in our contracts. So generally we try not to think in terms of premium… If it’s just straight 30% higher than the petroleum-based index, then no matter what price petroleum is trading at, they’re paying 30% more, which is not necessarily a win for everyone,” he added.

PROCESS, PRODUCTS AND PROJECTS
Origin Materials claims to offer a carbon negative solution to producing PET, and then, in the long term, a similar but more versatile polymer called polyethylene furanoate (PEF).

The negative carbon footprint comes from the fact that the sustainably harvested trees capture carbon dioxide (CO2), removing it from the atmosphere.

The Origin Materials process, which uses chemical reactions via a catalyst rather than fermentation, produces CMF along with hydrothermal carbon (HTC), a material similar to carbon black.

In the near term (2022-2025+), the company plans to use HTC for fuel pellets as well as activated carbon for the food and water treatment sectors. In the mid-term (2025-2027+), it aims to develop this into a carbon black replacement. From 2027 onwards, the plan is to use HTC to produce a next-generation agricultural additive to improve farming efficiency.

The company is building its Origin 1 plant in Sarnia, Ontario province, Canada and aiming for start-up in 2022. It expects to launch its first commercial scale CMF plant Origin 2 by 2025 and is currently looking for a site in the southeastern US.

“We think it’s reasonable to assume Origin Materials is targeting Origin 2 to generate  around $700m in sales with around 50% EBITDA [earnings before interest, tax, depreciation and amortisation] margins,” said Fermium Research analyst Frank Mitsch in a research note.

As the molar mass of CMF is around 144 g/mol (grams/molecule) and that of PX is about 106 g/mol, theoretically it would take around 144 tonnes of CMF to make 106 tonnes of PX.

“We see ourselves as going to CMF or HTC more importantly. We can go further downstream if we need to, but that’s not really the objective. We want to make the platform intermediates… We don’t want to get into the polymer business,” said Bissell.

“It’s not because we think it’s a bad business – it’s just not where all our technological know-how is,” he added.

Origin Materials is in the process of going public through a reverse merger with special purpose acquisition company (SPAC) Artius Acquisition Inc. Upon completion of the merger expected in Q2 2021, which would also come with an additional $200m in PIPE (private investment in public equity) financing, Origin Materials would have around $863m in cash to fund its growth plan.