Get the latest data, tools and insight for bisphenol A (BPA) with ICIS pricing and market intelligence.

Our short-to-long-term solutions – from pricing, analytics, industry news and supply and demand data –
ensure that you can evaluate BPA markets from every angle.

Supply increased after various plant turnarounds were completed. However, the early half of the quarter saw somewhat tighter spot supply as the arbitrage window to the west opened and Asian producers sold cargoes into tight western markets. The tight spot supply eased in the second half of the quarter as the arbitrage window closed due to firm freight costs and increasing supply availability in Europe and the US.

Demand decreased in Asia amid weak downstream sectors. The downstream sectors of epoxy resins and PC slowed towards the second half of the quarter, resulting in bearish market sentiment and causing buyers to postpone their purchases or to purchase BPA in smaller quantities. Some downstream plants also ran at low operating rates for commercial reasons, amid the slow demand for finished goods, resulting in slow demand overall for the commodity.

Supply has remained fundamentally short during Q2, amid import disruption and continued derivative demand strength. There has been unconfirmed talk that Covestro had some output disruption in Q2, which affected its spot availability temporarily. Hexion’s availability has improved during Q2, however, as the company officially lifted its force majeure in mid-May. Even though Hexion has remained on allocation since mid-May, the company has been offering again in the spot market during Q2.

Demand has been strong into the derivative epoxy and PC markets, underpinned by a particularly robust downstream construction sector. Import disruption and local output impacts have also boosted buying activity in some cases.

Whether you are buying or selling BPA, ICIS provides you with the right pricing data, analytics, news and market analysis you need to confidently plan and make your trades, as well as shape future strategies and maintain a competitive advantage. 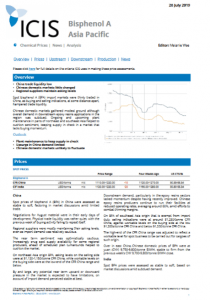 Each ICIS BPA pricing subscription comes with analytics tools that take away the hassle of developing your own analysis. Quickly access data such as: 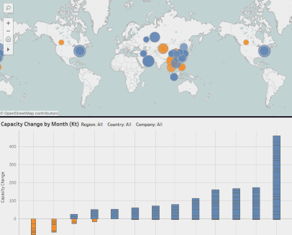 Stay on top of bisphenol A (BPA) markets across all regions with ICIS news. 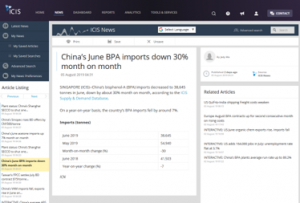 Get a long-term view of the market with the ICIS Supply and Demand Data Service, which offers end-to-end perspectives of the BPA markets. 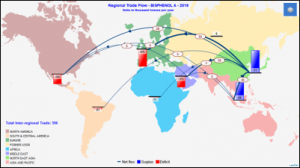 Safeguard your future with the opportunity to discuss your expectations and learn from industry experts at The ICIS 2020 World Phenol-Acetone Conference, a biennial event in the calendar of professionals across the globe. You can get face-to-face time with existing suppliers or explore new business opportunities to initiate future connections.

As a global event, a worldwide perspective is reflected throughout agenda topics, speakers and attendees. With content covering regional trends and their impact globally, you can expect to gain insight on a variety of relevant topics