Benzene reports are published weekly by ICIS in Asia, Europe and the US, with contract and spot price assessments, market news and analysis.

Benzene forecast reports for all three regions are published on a monthly basis, covering the market up to one year ahead. Monthly forecast reports are also available for the Styrene market.

Plant issues and scheduled maintenance kept supply constrained in the region. Logistical issues amid tight vessel space added further woes to the trade. The surge in the coronavirus pandemic across the region prompted new restrictions to be imposed on a number of economies, with some constraints at ports and plants also hampering supply chains. The open arbitrage window to the US for May cargoes saw increased volumes shipped to the west, constraining availability in the region.

Demand for Asia parcels was evident from the US as plants there restarted after the polar storm. Shortages of benzene in the US and Europe due to plant issues stoked demand for Asian material. Inventories at Chinese shore tanks drew down rapidly as consumption outpaced arrivals. While the resurgence of the coronavirus led to additional restrictions in some economies, overall demand remained decent. Buying momentum remained largely adequate.

Supply remained mixed, as unusual tightness linked to the US polar storms in February impacted the market. A postponed restart at ExxonMobil’s site in Botlek, the Netherlands, also significantly constrained availability. Supply began to improve in May with the conclusion of most upstream maintenances and as refinery output began to increase. Later in the quarter there were some concerns about low inventories in China, and reduced availability in Europe and the US.

Demand fluctuated after a strong start that pushed spot prices to record levels in April, supported by healthy demand for polymers and other products into construction and packaging among other outlets. A sharp decline in benzene and derivative styrene prices increased market caution. Demand restabilised toward the end of the quarter.

After a tight Q1 in the aftermath of February’s polar storm, supplies lengthened significantly starting in late April as refineries came back online from unplanned maintenance activity. The rise in inventories continued into late June as refinery utilisation rates rose on prioritised fuels production ahead of the US summer driving season.

Demand weakened for much of Q2 as derivative styrene and cumene production levels rebalanced in the US Gulf Coast region early in the quarter. Coupled with closing arbitrage windows with Europe and Asia by late May, benzene import demand waned in favour of increased domestic consumption. ”

We offer the following regional Benzene analysis and news coverage to keep you informed of factors and developments affecting prices in the Benzene marketplace.

You may also find useful

If you want to keep updated on the factors driving price movements in the global chemical markets, ICIS Chemical Business provides a summary of the information you need to support your business decisions. Every week, our global team of experts digests and summarises the key issues and their potential impact on the market – all in one magazine.

Over 25 years of reporting on key chemicals markets, including Benzene, has brought global recognition of our methodology as being unbiased, authoritative and rigorous in preserving our editorial integrity. Our global network of reporters in Houston, London, Singapore, Shanghai, Guangzhou, Mumbai, Perth and Moscow ensures unrivalled coverage of established and emerging markets.

Benzene is used primarily as a raw material in the synthesis of styrene (polystyrene plastics and synthetic rubber).

Benzene is a colourless, refractive liquid with a characteristic aromatic odour. Its vapour is toxic and highly flammable. In cold weather, benzene solidifies to a white crystalline mass. It is slightly soluble in water, miscible with ethyl alcohol, ether, acetone, carbon tetrachloride, carbon disulphide, and glacial acetic acid (GAA).

Ethylbenzene (EB) is the largest chemical outlet for benzene and nearly all is consumed in the production of styrene.

The second largest outlet for benzene is cumene which is nearly all consumed in phenol production with acetone formed as a coproduct.

The third largest outlet for benzene is cyclohexane (CX) which finds its way primarily into the nylon chain via caprolactam and adipic acid.

The fourth main derivative of benzene is nitrobenzene, which can be used to make aniline.

Benzene is used to make a number of other chemical intermediates such as alkylbenzene used in detergents, maleic anhydride(unsaturated polyester resins) and chlorobenzenes (engineering polymers).

The main sources of benzene are from the steam cracking or catalytic reforming of liquid petroleum feedstocks, primarily naphtha, where the benzene is recovered from the aromatics stream. Other processes are hydrodealkylation (HDA) of toluene and toluene disproportionation (TDP).

US Benzene Prices were assessed at $2.75 – 2.83 / gal FOB (free on board) in mid June 2015. Downstream US styrene outages have depressed benzene prices whilst at the same time fuel blending demand has raised Prices for Toluene to $2.95-3.08/gal. This change has almost eliminated the spread between the two aromatics in the US for the first half of 2015. 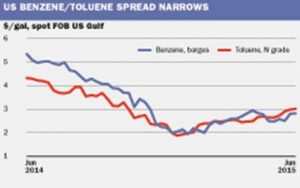 Following on from the success of our first virtual event, the ICIS European & Asian Virtual Conference will bring together key players from across Europe and Asia to discuss the current challenges and opportunities within the Surfactants industry. This vibrant and varied digital event will provide a platform for business-critical conversations and expert insights to help you navigate through these exceptional times.