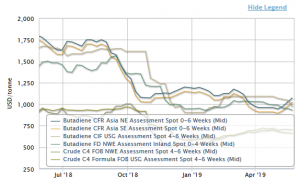 Supply tightened in the quarter, first due to the onset of a heavy wave of regional plant turnarounds in April. Although this was to some extent offset later by some plants in China returning from unplanned closures in Q1, more regional volumes were drained in the second half of the quarter by competing demand from the supply-starved US market.

Regional demand fell in the quarter, contrary to earlier anticipation, after a second wave of COVID-19 infections emerged. This forced several key regional outlets, from India to Malaysia, into prolonged country-wide lockdowns, weighing down downstream operations and reducing requirements for raw materials like BD.

Supply was tight during Q2. Output was restricted through planned and unplanned cracker/BD unit outages, which limited BD precursor crude C4 (CC4). CC4 was additionally constrained because cracker operators cracked light feedstocks due to economics, and these produce less CC4.

Demand remained very healthy, both domestically in terms of contractual offtakes and on spot. Export demand was particularly strong as US supply issues have persisted and consumers in the region have had to look to Europe and Asia to supplement volumes. Spot prices rose significantly over the quarter.

While US polar storm outages were largely resolved, production disruptions continued through the quarter and supply remained insufficient to meet demand. Shell Norco was on turnaround in April and May. TPC dealt with ongoing boiler issues that resulted in intermittent outages. Arlanxeo was feedstock constrained for several weeks because of a feedstock supplier outage. The remaining suppliers either did not have surplus volumes or were restricting sales through May.

Demand strengthened through the quarter as downstream producers had their own depleted inventories to manage. They had to temper rates because of a lack of BD and allocate their own sales. Additionally, tyre demand was very strong amid strong demand for replacement tyres. Tyre producers have redirected capacity to replacement amid a chip shortage curbing OEM production. 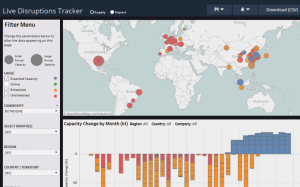 MOSCOW (MRC)--Polyethylene (PE) imports to the Ukrainian market totalled 171,100 tonnes in the first eight months of 2021, down by 6% year on year. Imports of all PE grades decreased, according to...

MOSCOW (MRC)--Uz-Kor Gas Chemical shut its production of high-density polyethylene (PE) and polypropylene (PP) on 6 September for a scheduled maintenance, according to an MRC Price Report. Uz-Kor is...

The outgoing chief economist at US trade group the American Chemistry Council (ACC), Kevin Swift, analyses the impact of Storm Ida and reflects on the key changes which have shaped the chemical...