Our short-to-long term solutions – from pricing, analytics, industry news and supply and demand data –
ensure that you can evaluate EG markets from every angle. 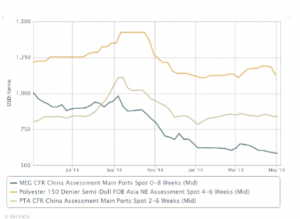 Production in Q3 fell as regional producers reduced operations to cope with poor margins. The arbitrage window between Asia and Europe opened in August, which tightened the supply in Asia after large quantities of cargoes were moved to Europe. Furthermore, the falling imports from the US and India also lent some support to prices.

Downstream polyester demand in China slowed down in July and August amid the traditional off-peak season. Many polyester producers were covered by their contract supply and hence, they were not keen to purchase cargoes in the spot market. Polyester producers had also cut operations amid rising cost pressure and polyester inventories. However, moving into September, demand increased amid the peak manufacturing season and pre-holiday restocking activities.

MEG imports fell on lower demand, which led to less balanced supply in summer. Following Hurricane Laura in August, a third of US capacity was struck down, leading to tighter availability in Europe. In September, some market players were caught offguard as the market switched dramatically over summer and spot prices soared on lack of availability and reduced imports in the wake of Hurricane Laura. DEG and TEG supply was more relaxed compared with co-product MEG.

Downstream PET demand was better than antifreeze or coolant demand during Q3. European consumers are opting to draw as much as possible from the discounted contracts, agreeing to maximum quantities where possible, in the face of climbing spot prices and reduced local supply from turnarounds. Spot prices rose well above contract levels. Sellers are still dealing with high production costs and poor contract margins.

Supply was tight starting in early August, as several producers prepared for planned maintenance and another took its volumes out of the domestic market. In late August, Hurricane Laura shut down production in Louisiana, tightening supply to crisis levels. Idled capacity and force majeures affected nearly two-thirds of US EG capacity, leaving little or no spot capacity and even contractual volumes were diminished.

The pandemic has increased takeout and packaged meal consumption, sustaining strong demand for downstream PET film, as well as bottles used to package in-demand cleaning supplies. An aluminium can shortage also helped prop up PET-bottled drinks, in the absence of travel and large events that contribute to peak summer demand. Demand for DEG into UPR and PU systems picked up just as supply became constrained.

Downstream demand will slow down with the approach of the year-end lull season. Buying activities from converters may tilt slower amid the coronavirus-hit demand. Polyester producers may lower operations further on slowing sales and rising inventories.

MEG supply is expected to loosen as importers were looking to Asia to source material to alleviate some of the pressure cause by the lack of US imports. There was also mention of some material shipped from Saudi Arabia to Europe to cover shortages caused by the US outages. Middle East supply is said to be tight due to cracker feedstock limitations. Shell’s EO/EG maintenance took place in September for six weeks. A short turnaround at BASF’s Antwerp EO/EG facility is expected to take place in end-October.

Downstream antifreeze demand typically picks up during the colder months but was heavily hit during April or May during automotive manufacturer shutdowns and is still recovering. Downstream PET seasonal demand tapers off in winter and Q4 brings a heavy shutdown schedule. As coronavirus cases rise and restrictions tighten, there is uncertainty across many commodity markets.

Supply should recover in November, as plants restart from planned and unplanned shutdowns. If demand for high-purity EO derivatives such as cleaning and hygiene products continues, producers could divert the feedstock away from less profitable glycols and this could constrain EG supply.

Demand into PET is expected to decline on seasonality with the approach of colder weather. However, the pandemic has kept PET demand strong since late March and could remain strong until a coronavirus vaccine is available and end-consumers’ buying behaviour returns to normal. With the onset of winter, antifreeze demand for MEG is likely to increase, as is demand for TEG as a dehydrating agent to prevent natural gas pipes from freezing.
Speak to ICIS

How Can We Help

Whether you are buying or selling EG, ICIS provides you with the right pricing data, analytics, news and market analysis you need to confidently plan and make your trades, as well as shape future strategies and maintain a competitive advantage. 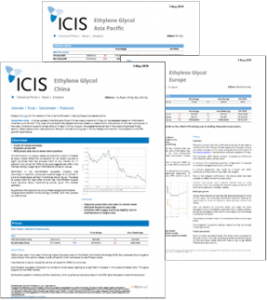 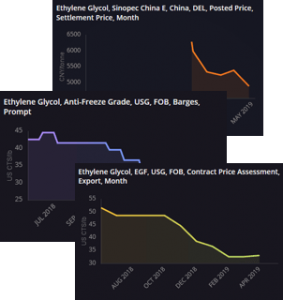 * Due to active EG trading in Asia, daily reports are available for our Asian coverage.

Each ICIS EG pricing subscription comes with analytics tools that take away the hassle of developing your own analysis. Quickly access data such as: 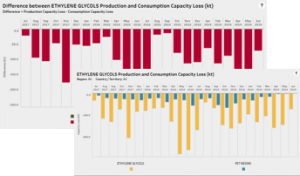 Stay on top of ethylene glycol (EG) markets across all regions with ICIS news. 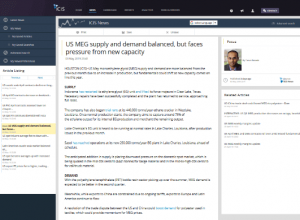 Get a long-term view of the market with ICIS Supply and Demand Data Service, which offers end-to-end perspectives of the EG markets. 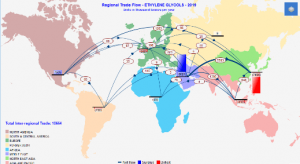 Our Pricing Methodology: ICIS price assessments are based on information gathered from a wide cross-section of the market, comprising of consumers, producers, traders and distributors from more than 250 reporters worldwide. Confirmed deals, verified by both buyers and sellers, provide the foundation of our price assessments.

Interested to find out how we derive our prices? Find out more about our EG methodology coverage here

We use cookies to improve the performance of our site, to analyse the traffic to our site, and to personalise your experience of the site. You can control cookies through your browser settings. Please find more information on the cookies used on our site here