ICIS has extensive coverage of the Polypropylene markets and our network of locally-based experts deliver reliable and trustworthy pricing information on a weekly basis. Price reports are published from Africa, Asia, southeast Asia, Middle East, China, CIS, Europe, Turkey, US and Latin America.

There are also weekly margin reports in Asia, China, Europe and the US assessing a short-term three-month view and longer-range view. Forecast reports looking forward a year and 12-month rolling series reports are also compiled for Asia, Europe and the US. This high-value news and analysis is an essential business tool to assist market players when making crucial decisions 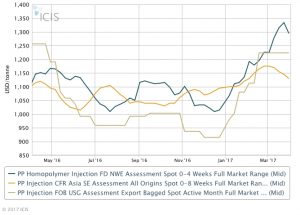 Availability dwindled through the first half of Q2. Suppliers shifted focus from Asia, following the Lunar New Year holidays, to Europe and Latin America. The second half of the quarter saw this alleviated somewhat by offers of Chinese-origin material – first, re-exports, then, Chinese-produced volumes. The lengthy delivery times meant the first deliveries would only arrive in Q2.

Demand was driven by availability, with many Middle Eastern sellers cutting their allocations to Africa. This included contracted volumes in some cases, leaving buyers struggling to fulfil even basic requests.

PP supply tightened in Q1 2021 as a result of a series of planned and unplanned turnarounds globally. Strong demand in other regions saw some suppliers cutting their allocations to Asia and routing their cargoes to other destinations for better netbacks. In China, domestic supply was ample as most plants operated normally. At the same time, Haiguo Longyou, Dongming Hengchang and Sinopec-SK Wuhan started up their PP units in Q1.

Steep increases in PP prices undercut converters margins as they struggled to pass on the added costs to end products. As a result, some converters began to lower their operating rates. Buyers also became increasingly wary of potential downward correction in PP prices.

PP supply in Q1 was extremely tight, even short. Contracted buyers had less difficulty securing material than spot buyers. Tightness stemmed from increased exports and reduced imports in Q4 2020, when European prices were very low in global terms. Refinery run rates reduced the output of propylene, and the ice storm in Texas, US, affected almost all PP production, when demand from Latin America was very strong.

Demand was strong in Q1, with packaging and non-woven performing particularly well. Tight supply – caused by stronger exports, reduced imports and reduced output – led to some buyers requesting more volumes than they needed in Q1, as they attempted to get a portion of their requests, leading to some confusion over the true level of demand. An unprecedented, large price gap between Asia and Europe is expected to draw imports to Europe.

Demand for PP in Q1 was strong in most regional markets despite signs of easing industrial activity in larger regional economies in 2021, following a strong recovery in 2020. Economic output is pressured by rising inflation and activity may be easing overall, but PP demand will likely remain stronger than the broader economy. Pandemic mitigation efforts continue supporting higher demand for both non-woven and film grades.

Supply tightened sharply from Q4 2020, as a spate of production disruptions in the US emerged following the winter storm that hit the US Gulf Coast. 84% of US PP production was hit, creating a supply gap within the Americas. Availability within the Middle East consequently tightened, as suppliers exported bulk allocations to these regions in view of higher netbacks. Several unplanned and planned outages within the region further curtailed Middle Eastern supply.

Early Q1 demand was stable as buyers looked to stock up at the start of 2021. Trades dived thereafter following curtailed allocations to the region, as regional sellers exported bulk volumes to deep-sea destinations on significantly higher netbacks. Demand and transaction volumes were further hit by the successive price hikes through Q1. Buyers purchased on a need-to basis, as it became increasingly difficult for processors to pass the resin price hike to downstream markets.

Allocations to Turkey from the Middle East reduced through the first quarter, as sellers chased higher prices, first in China, then Europe. The spike in European prices towards the end of the first quarter has attracted offers from other major sources, such as Egypt and Russia, away from Turkey. Production outages in the Middle East increased through the quarter putting even more pressure on availability.

Demand began weak in the first quarter, as buyers were expecting prices to soften following the Lunar New Year Holiday. As prices remained high, buyers were left chasing limited availability. These fundamentals remained in place through the quarter, even as some converters reduced their output to cope with the loss of their profit margins.

US PP tightened further as the mid-February polar storm along the US Gulf Coast caused over 80% of US PP plants to shut down, according to ICIS Analysis. February production figures sank to a multi-year low while inventories were also drawn down to a multi-year low as demand remained strong while supply tightened. Propylene producers continue to struggle to produce enough propylene to support derivative run rates in the face of strong demand.

We offer the following regional Polypropylene analysis and news coverage to keep you informed of factors and developments affecting prices in the Polypropylene marketplace.

Specialist reporting
Other types of reports we cover for Polypropylene

Use margin reports to assess the profitability of commodities

If you want to keep updated on the factors driving price movements in the global chemical markets, ICIS

Chemical Business provides a summary of the information you need to support your business decisions. Every week, our global team of experts digests and summarises the key issues and their potential impact on the market – all in one magazine.

Over 25 years of reporting on key chemicals markets, including Polypropylene, has brought global recognition of our methodology as being unbiased, authoritative and rigorous in preserving our editorial integrity. Our global network of reporters in Houston, London, Singapore, Shanghai, Guangzhou, Mumbai, Perth and Moscow ensures unrivalled coverage of established and emerging markets.

Polypropylene (PP) is one of the most versatile of the bulk polymers. Its intrinsic properties of high stiffness, good tensile strength, good processability and inertness towards acid
Read more…

The ICIS Polypropylene (PP) price forecasting model is a brief monthly publication that can be accessed via the Dashboard.
Read more…

The main method of PP manufacture is by using refinery grade propylene (RGP), produced by a refinery, to convert to polymer grade propylene (PGP) through a superfractionation unit.
Read more…

The ICIS Polypropylene (PP) USA price forecast report is a monthly publication that can be accessed via the Dashboard.
Read more…

Polypropylene (PP) is a colourless, translucent to transparent solid with a glossy surface. It has good resistance to acids, alkalis, inorganic chemicals and organic chemicals with the exception of hydrocarbons and chlorinated compounds.

It has improved impact strength, a higher softening point, lower density, better stress cracking and more scratch resistance than other polyolefins. However, a disadvantage of this polymer is its brittleness at low temperatures.

Polypropylene was first produced in a slurry process using Ziegler-Natta catalysts. Bulk phase technologies were then developed while higher activity catalysts enabled gas phase processes to be used. A combination of bulk phase tubular and gas phase reactors has become a popular process.

PP has key applications in packaging, fibres and automotive parts. PP can be extruded for pipe, conduit, wire and cable, while atactic PP has outlets in paper laminating, sealants and adhesives.

MOSCOW (MRC)--Polypropylene (PP) imports into Belarus grew in the first four months of 2021 by 7% year on year on increased demand, according to MRC’s DataScope report. Overall imports of propylene...

Ukraine's PP imports up 4% in January-May

LONDON (ICIS)--Prezero Netherlands is seeking external sorting companies to sort its plastic waste following a fire at its Zwolle post-consumer waste sorting centre in the Netherlands on Wednesday 16...

HOUSTON (ICIS)--Here are the top stories from ICIS News from the week ended 18 June. Methanol plant in Washington state called off by developers Northwest Innovation Works (NWIW) will be terminating...