Get the latest data, tools and insight for isocyanates like methylene diphenyl diisocyanate (MDI) and toluene di-isocyanate (TDI) with ICIS pricing and market intelligence.

Our short-to-long-term solutions – from pricing, analytics, industry news and supply and demand data – ensure that you can evaluate the isocyanates markets from every angle.

MDI supply was mixed in Q1, with cargoes in short availability ahead of the Lunar New Year period when buyers based in locations such as China, Taiwan, and parts of southeast Asia were actively buying to stock up. However, following the coronavirus spread and the subsequent crude futures plunge, cargo availability turned ample in the region. There were limited planned turnarounds for MDI in Q1.

Producer Covestro commenced output from its Brunsbuettel expansion, adding to existing oversupplied conditions. Late into the quarter, BASF commenced maintenance at its Antwerp plant in Belgium, the biggest in the region, and there were unconfirmed reports that Huntsman reduced output of some MDI products from its Rozenburg plant in the Netherlands. As demand dwindled amid the onset of the pandemic through Q1, Borsodchem reduced run rates at its plant in Kazincbarcika, Hungary, and cancellations of imported volumes were seen.

While some seasonal improvement was seen in MDI demand in Europe early in Q1, the market remained subdued. MDI used in construction applications benefitted from an unusually warm winter and elevated demand in some areas. However, ongoing weakness in the automotive sector reduced overall demand, particularly as much of the industry closed late in the quarter as governments in the region moved to contain the spread of the coronavirus.

Supply was ample at the beginning. However, with the outbreak of the coronavirus in China, there were problems in shipping it to the Middle East regions. More measures were taken later and cargoes were delayed as every procedure took longer than usual. Some market players also said a main producer had some issue with its plants.

Demand was good at the beginning of Q1 but with the outbreak of the coronavirus, the market turned muted, with no discussions. Some downstream users either lowered their operating rates or shut down their plants to deal with the virus. There was no demand at all in the last week of Q1.

Methylene diphenyl diisocyanate (MDI) availability was sufficient throughout the first quarter, with some indications that the market was getting a bit tighter relative to demand early in the quarter. Towards the end of the first quarter, the spread of the coronavirus and the measures put in place to counteract the virus weakened demand, leaving the market well-supplied.

MDI demand started the quarter on a steady to stronger note following a year of slower than expected demand growth in 2019. A mild winter spurred additional construction activity during the traditional slow season for construction. However, as the coronavirus outbreak spread to North America and measures were put in place to contain the spread later in the quarter, demand for MDI and polyurethane systems fell as economic activity slowed.

Spot availability of TDI fell on the back of transportation woes brought about by the impact of the coronavirus spread on China’s export facilities. Port closures, limited manpower and insufficient storage space were some of the factors contributing to shortened supply in the region. As such, import material offered to markets such as southeast Asia and India were largely of other origins such as South Korea in the earlier part of the quarter.

Cargo uptake was heavily weighed on by dampened sentiment over the increasing global spread of the coronavirus. Many market players maintained a cautious approach, preferring to consume contractual volumes instead of seeking additional spot purchases. Towards the end of the first quarter, hefty slides in crude futures pushed the market into uncertainty, which saw some TDI buyers cancelling orders.

Europe’s toluene diisocyanate (TDI) market continued to face a structural oversupply in the first quarter of 2020. Availability remained ample even as producer BASF carried out maintenance at its Ludwigshafen site and Covestro reduced output, as depressed consumption continued and as imports more than compensated for any reductions in local volume. Later in the quarter some reductions in run rates were heard as coronavirus-related closures saw demand collapse.

Demand plummeted late in the first quarter as coronavirus controls led to the closure of much of the region’s flexible foam producers. This added to existing depressed demand resulting from ongoing weakness in the broader economy, trade tensions between the US and China and uncertainties around the impacts of Brexit. Bedding, furniture and automotive sales had almost completely stopped at the end of the quarter and only sales into the healthcare sector were seen.

Supply remained constant with no turnaround or shutdowns heard. According to some sellers, margins were not so good. As a result, though market was a little tight, some kept their plants running constantly without increasing the operating rates.

Demand was increasing at the beginning of the year in a tight market especially when Chinese cargoes could not be shipped during the coronavirus outbreak. However, as the coronavirus spread in Middle East regions, many countries were locked down, and demand became muted.

The global toluene diisocyanate (TDI) market continued to face global supply length throughout the first quarter as capacity additions in recent years have been added at a faster rate than demand has risen. US plants were heard to be running at normal rates, keeping supply levels sufficient in the domestic market.

TDI demand was sluggish throughout the first quarter as automotive demand remains slower than anticipated. Furniture and bedding demand has also posted slower-than-expected growth in line with weaker GDP expansion. The outbreak of the coronavirus along with containment efforts later in the quarter further depressed demand.

Whether you are buying or selling isocyanates, ICIS provides you with the right pricing data, analytics, news and market analysis you need to confidently plan and make your trades, as well as shape future strategies and maintain a competitive advantage. 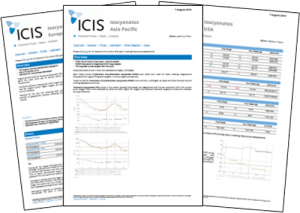 ICIS publishes weekly pricing reports for isocyanates to help you keep track of trading prices, understand price drivers/fluctuations and set a benchmark for contract price settlements. Key assessments covered in our report include:

Each ICIS isocyanates pricing subscription comes with analytics tools that take away the hassle of developing your own analysis. Quickly access data such as: 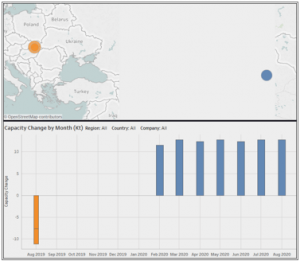 Stay on top of isocyanates markets across all regions with ICIS news.

Get a long-term view of the market with the ICIS Supply and Demand Data Service, which offers end-to-end perspectives of the isocyanates markets. 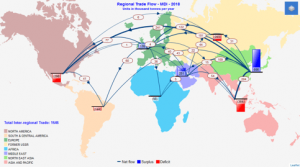 Our Pricing Methodology: ICIS price assessments are based on information gathered from a wide cross-section of the market, comprising consumers, producers, traders and distributors from more than 250 reporters worldwide. Confirmed deals, verified by both buyers and sellers, provide the foundation of our price assessments.Interested to find out how we derive our prices? Find out more about our isocyanates methodology coverage here

MDI is made available both in pure form and as a mixture of MDI, the dimer and trimer. Mixed MDI is referred to as polymeric isocyanates or PMDI. It is used mainly in polyurethane (PU) foams. Rigid foams are mostly used in construction, refrigeration, packaging and insulation. Flexible foams are used in furniture, bedding and transportation. MDI is also used to make binders, elastomers, adhesives, sealants and coatings.

TDI occurs as colourless to pale yellow liquid or crystals with a pungent odour. All isocyanates are hazardous and must be handled with care. Skin contact must be avoided, as redness, blistering and possible sensitization can result.

SINGAPORE (ICIS)--The isocyanates market in the Middle East has been witnessing weak demand due to nationwide lockdowns and supply chain disruptions. The market faces an uncertain outlook heading...

LONDON (ICIS)--European chemicals firms have navigated through one of the most tumultuous six-month periods in modern history, with the economy starting to recover but normal conditions still far in...

LONDON (ICIS)--Here are some of the top stories from ICIS Europe for the week ended 12 June. Europe PET boosted by appetite for local product, lockdowns easing but uncertainty remains Millions of...

It has been a tough period for chlor-alkali producers as recent months showed a sharp downturn in margins for caustic soda. This scenario threatens to bring to an end the period of strong margins, despite some signs of a limited rebound earlier in Q4 2019. Across all major markets, calculated margins based on the co-production of caustic soda and ethylene dichloride (EDC) have weakened substantially since October 2018.

Like many others, if you are looking for ways to unveil answers to key industry questions then come and join us at the 24th World Chlor-alkali Conference organised by ICIS and Tecnon Orbichem. This 1.5 day event has been a home for key industry players in the value chain, having welcomed hundreds of delegates each year. Take a first look at the key offerings in 2020.