For FMCGs and retail procurers, window of opportunity is now

What does the spring oil collapse mean for procurers at the end of the value chain?

Welcome to June and the unofficial start to summer in the Northern Hemisphere. If you are a fast-moving consumer goods (FMCG) company, you have also entered the timeframe in which you and many of your peers should see the trickle-down effect of lower crude oil prices in the cost of your crude-oil-related raw materials.

Research shows that the effects of a crude oil downturn similar to what was experienced this spring takes at least three months – and often much more time – for correlated price falls to ripple downstream to the end of the value chain occupied by FMCGs and retailers. Chemical producers at the top of the chain see price movement fairly quickly in feedstocks such as naphtha and in refinery-centric aromatics such as benzene, typically in days to one month’s time, with a pass-through of the movement to product prices one to three months after the crash.

Middle of the value chain occupants such as plastics converters and specialty chemical makers see the reverberation of the crude oil collapse next, followed then by those at the end of the value chain. By that point the large wake created by the crash has rippled down into a much flatter, more docile wave for most down at the FMCG/retail end, but that mostly has been because those at that end have been more reactive towards sourcing raw materials than proactive.

An increasingly active stance towards sourcing is a must for FMCGs and retailers right now in these uncertain times in which companies are struggling with lower economic activity and a concerned if not scared consumer. Every dollar counts, and a proactive sourcing strategy can yield large results to company earnings in the wake of the crude oil price collapse, as illustrated in the slide below. 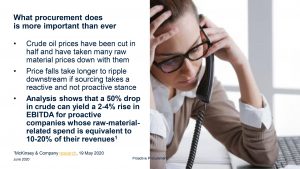 The crude oil collapse began in earnest in February and hit bottom in April as the coronavirus wave inundated Europe and North America. Proactive sourcing strategists would have started working their phones and email boxes between making Valentine’s plans and would have kept the lines of communication warm as further crude price falls in March and the proliferation of stay-at-home orders portended lower demand and lower raw material pricing for any chemical or polymer not directly being sourced specifically to help fight the pandemic (we’re looking at you, isopropanol).

Meanwhile, a reactive FMCG/retail procurement team might have just now started looking seriously at price negotiations for H2 2020. They may think they will receive substantial discounts on their materials due to that earlier crude oil price drop, only to be met by suppliers pointing to West Texas Intermediate crude oil’s 76% month-on-month price recovery in May compared with April. Suppliers may even use that momentum to keep prices last negotiated for H1 at a rollover, banking on the buyer’s passive stance and the supplier’s ability to sell the premise of steady prices when crude is rising as a win for the buyer.

To many sourcing strategists, that last notion may sound ludicrous, but it does happen. I have been part of calls with sourcing teams of downstream companies who freely admit to having contracts whose prices do not move until the supplier calls up to change the price. Those calls come in to ICIS because those procurement teams want to change that practice and arm themselves with data and insight so that they can negotiate savings via a fairer deal. They are taking the first step towards proactive procurement.

Spring’s crude oil price collapse has brought about a window of opportunity right now for FMCG/retail sourcing teams to further prove their value to their companies. Proactive procurers recognised that opportunity months ago.