Home Blogs Chemical Connections With so much hanging in the balance, let data light the way

With so much hanging in the balance, let data light the way

The fourth quarter (Q4) of 2020 is the most consequential quarter in generations.

It feels like hyperbole to type and sounds just as sensationalistic when said aloud, but not since Q4 1941, when the bombing of Pearl Harbor changed the US’ relationship with the rest of the globe for the next 80 years, has there been such a pivotal time for the fortunes of the country and, dare I say it, the world.

Disagree? Here’s the three-pronged basis for my assertion:

I don’t mean to sound melodramatic, but the outcomes of the above events will be major factors in how 2021 plays out – and probably beyond. If you’re forecasting markets for next year, you need to have a variety of scenarios for all possible outcomes from those events, and plot their likely effects on your sourcing or selling strategy. Backed by the Supply Demand Database, we at ICIS are well-equipped to help for that task. And that database can uncover some unexpected outcomes.

Amid the US economy’s sluggish state, consumer demand for staple goods such as foods and health aids has held up, which has helped the polyethylene (PE) market weather the downturn fairly well in comparison to other sectors of the chemical value chain. However, data presented during the North American Packaging Forum by James Ray, ICIS Vice President for Consulting in the Americas, is striking. PE consumption year-to-date has actually risen in the US, even with several months of job losses and stay-home orders keeping consumers from their normal spending patterns. 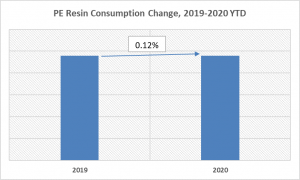 Sure, it’s just a fraction of a percent rise, but compare that to the last economic downturn, the great financial crisis of 2007-2008. US consumption of low-density PE, linear low-density PE and high-density PE as a whole fell by 8.6% in 2008 from 2007, according to the ICIS Supply & Demand Database. For US PE demand to be not only resilient but also expanding speaks to a few developments:

The ability to analyse such trend changes speaks to the power of the Supply & Demand Database. There have been many comparisons of this year’s economic downturn to the financial crisis more than a decade ago, but these are based on assumptions that markets will behave the same this time around. There’s a reason financial firms advertise their investment skills with the caveat of “past results are not indicative of future performance.” Chemical markets misbehave similarly, so arm yourself with information to understand the present and prepare for any scenario that might result from these momentous times.

PREVIOUS POST Chemical Investor Forum: Exploring regression analysis to forecast Westlake’s earnings
NEXT POST Why a new stimulus deal could be critical for US polyethylene demand