Decoupling talk is decoupled from reality

It was supposed to be a harmless press conference honouring the US Labor Day holiday, but President Donald Trump made a statement about possible changes in the US-China relationship that if implemented would have substantial implications for chemical markets.

In vowing to bolster US manufacturing by reshoring jobs from China should he be elected to a second term in office, Trump broached a topic of separating US and China economically – or decoupling. “So when you mention the word ‘decouple,’ it’s an interesting word,” Trump said.

To decouple with China would be problematic for many US-based companies who have made investments in that country or based on that country’s demand.

American businesses with economic ties to China are largely ignoring Trump’s interest in his interesting word, with more 70% saying in an American Chamber of Commerce survey that they had no plans to relocate any manufacturing from China even amid the current tariff war between the economic juggernauts. But that doesn’t mean they aren’t worried. The same survey showed that American businesses with Chinese interests are now more worried about the deteriorating US-China relationship than slowing economic growth in China, domestic competitors or theft of intellectual property.

Uncertainty often leads to hesitancy in investing in capital and resources for future endeavours, which in turn puts a ceiling on business growth prospects. Put another way, it’s harder to plan for tomorrow when you’re worried that tomorrow the US president will escalate the trade war via Twitter.

Ignoring what Trump says about China in an election year would be foolish. He is on record saying that splitting with China would return the US to the manufacturing superpower level it had in the mid-20th century, which conjures images of the “good old days” of the 1950s and 1960s for the older voters he’s hoping to keep in the fold for November, because older US citizens can be counted on to vote. China as the economic enemy has some resonance with Trump’s support base, even if his belief is misguided at best.

The reasons that the US cannot simply decouple from China are numerous and cover a broad spectrum of sectors, but let’s take one example from the polymer markets. No, not polyethylene (PE), whose story has been well told amid the growth in US PE production for export matching up with China’s PE deficit. Instead, take a look at polyvinyl chloride (PVC), an important plastic for use in construction, infrastructure and consumer goods. 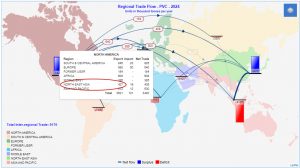 Why look at 2024? Because that would be the last year of a second Trump term and could be when the full effect of a decoupling took place. If those 427,000 tonnes of PVC no longer had China as a port of call, where could they go? The US already exports a great deal of material to the rest of the world, and the deficit you see for southeast Asia in the Supply & Demand Database trade flow map is mostly met by imports from nearby China. While China would need to replace supply once met by US imports, it has shown the capability to quickly devote its capital and planning towards building its own plants or financing operations and logistics in nearby, more friendly regions to secure needed supply.

Displaced US PVC exports to China would have few options other than to be offered at low prices that will depress margins, and over the long haul could be untenable.

Trump’s notion of reshoring US manufacturing from China risks the manufacturing advantage his country has regarding ethylene derivatives such as PVC, PE and ethylene glycol. That advantage is being exploited in large part because China has been a massive, available market. Take away that availability and the production advantage shrinks away, and with it, likely the US’s shale-driven chemical manufacturing dominance.

That is what “decoupling” would actually mean.