Home Blogs Chemical, resin plants may be hurricane-ready, but markets are not

Chemical, resin plants may be hurricane-ready, but markets are not

Forecasters of this year’s hurricane season expect above-normal activity, and so far that seems on point with the naming this week of the Atlantic’s fourth tropical system.

The active start also should bring to mind the precarious state commodity chemical markets and their participants find themselves in right now. Should the Texas-Louisiana coast not navigate through this hurricane season unscathed, the Q4 2021 and early 2022 marketplace could see unprecedented volatility – yes, even worse than was experienced following February’s Gulf Coast freeze – due to severe supply and demand disruptions. Market dynamics are not in a position to tolerate hurricane disruptions as they have in previous years.

Put another way: Chemical and resin plants may not be more susceptible than normal to hurricane damage right now, but the markets they serve are.

The National Weather Service estimates based on historical data that Texas and Louisiana’s odds each year of being affected (brushed by or hit) by a hurricane – a tropical system with sustained winds greater than 75 miles per hour — at 1-in-3. About 20% of that Texas-Louisiana coastline (particularly south of the Corpus Christi, Texas area) is not dotted with chemical plants or refineries, so factoring that out leads to almost a 1-in-4 chance each year that a hurricane will strike a section of the Gulf Coast key to the chemical and/or energy supply chain. That aligns with data analysis here regarding odds of cities such as Freeport, Texas; Galveston, Texas; and Cameron, Louisiana being affected a hurricane.

Chemical plant and refinery operators are accustomed to those risk odds and are adapted to the challenges operating in a hurricane-risk environment. Gulf Coast refineries, crackers and chemical derivative plant weather the situation via orderly shutdowns ahead of the storm, assessment of any damages after it passes and then making relatively quick repairs to get back into operation. Historically the plants were back up and running within a couple of weeks, although particularly devastating windstorms such as hurricanes Katrina and Rita in 2005 led to multi-month outages. More recently, Hurricane Harvey in 2017 brought historic flooding to the Texas coast, while Louisiana in 2020 was subjected to five landfalling hurricanes. Refineries and chemical plant production were affected, but only for a short period – especially in comparison with winter weather events such as Winter Storm Uri’s arctic blast this past February.

As we have reached the soupy, sweaty summertime on the US Gulf Coast, there are no worries of another Uri coming through in the next couple of months. Hurricanes are a different matter, and the contention here is that should a major tropical weather event occur on the Texas-Louisiana coast this storm season, the net effect on chemical production and pricing would buck previous norms of short-term market blips and instead resemble what happened with February’s winter storm – or be worse. The reasons are threefold:

Logistics
The container shortage and dislocations, COVID-19 outbreaks at ports and the disjointed nature of the current ocean freight shipping environment have basically regionalised once global markets. A loss of production in the Gulf Coast due to a hurricane would not necessarily mean a cavalry of imports from Asia or Europe would be on the way to save the day – there may not be the ships or the product to do that, or the lead time in getting those imports over may be measured in months, not weeks.

Parts
As Al Greenwood explored excellently in his recent Insight article on ICIS News, repairing hurricane damage this season may not be as easy a task as in previous years due to manufacturing issues across supply chains and the disrupted logistics of moving needed parts. Such parts are not lying around on department store shelves. They need to be specially made, and that might be a problem being that backlogs of orders have reached a record high according to the Institute of Supply Management (ISM). In fact, backlogs for fabricated metal products and computer and electronic products all had their backlogs expand strongly in May, according to the ISM. Not a good sign if you need some petrochemical plant parts made on the fly. Thus, returns to operations could resemble more the 30-45 process seen with Winter Storm Uri than the 7-21 day process seen with typical Gulf Coast tropical weather over the last several years.

Markets at present
Current markets have no margin for error. Inventories are depleted due to the effects on production from February’s winter storm, last autumn’s hurricane strikes in Louisiana and plant shutdowns at the onset of the pandemic in March 2020. Meanwhile, demand for chemicals and resins has been strong, with consumer goods, construction and automotive sectors leading the way. Backlogs of orders are still being worked through, and getting to where inventories can be rebuilt is not expected until Q4. Every production unit matters right now, and an unexpected loss of several of them for an extended period would bring back February’s extreme supply tightness, with pricing momentum shooting skyward from a higher starting point than occurred with Uri.

The graph below from the ICIS Live Supply Disruption Tracker shows how unplanned outages from weather have left their marks on chemical markets in the last four years, with this particular chart focused on high-density polyethylene (HDPE) production.

A couple of conclusions can be made from the data: 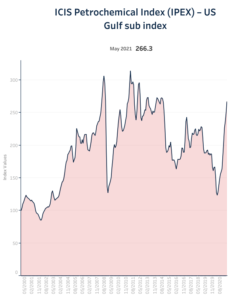 The ICIS Petrochemical Index (IPEX) basket of chemical prices for the US Gulf bears out the tenuous situation of the current market, as key materials such as paraxylene (PX), polyethylene (PE), polypropylene (PP) and polyvinyl chloride (PVC) have seen significant price inflation (they are just four of the 12 components of the IPEX, the methodology for which can be found here).

The US IPEX rose by 17.6% from February to May in large part due to the aftereffects of Uri-related production outages, which were pervasive and lasted 30-45 days for several plants. Those price increases were built on a foundation of several months’ worth of increases due to the resilient demand/tight supply seen amid the pandemic.

Should a hurricane cause significant damage to chemical plants on the Texas-Louisiana coast, the price shock could be enormous if repairs end up taking 30-45 days due to the challenges listed above. When February’s freeze hit, US spot propylene basically doubled overnight to then-shocking level of 125 cents/lb, or $2,756/tonne. For reference, the 10-year US spot propylene price average from 2011-2021 is just 49 cents/lb, or $1,080/tonne. 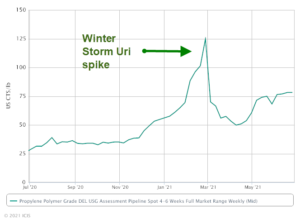 Spot propylene prices right now are in a range of 75-80 cents/lb. Double that and we are talking 150-160 cents/lb propylene – or up $3,527/tonne. Imagine the pricing effect and possible demand destruction that would cause for derivatives such as PP (used in automobiles and packaging), acrylic acid and acrylates (used in making paints, coatings and superabsorbent polymers for diapers) and propylene oxide (used in making polyols for polyurethanes, as well as in adhesive, paint and detergent formulations).

Chemical markets sit at a very dicey stage the COVID recovery. Make it through hurricane season without incident and the chemical industry has an excellent chance to balance supply and demand heading into 2022. But there is a legitimate chance a storm will knock the wind out of the market, and perhaps do much worse. Raw material scarcity and high-price volatility in chemical markets would have significant detrimental effects on supply chains and end products, adding fuel to mounting inflation fears and possibly even leading the way towards an economic downturn. It is not out of the realm of possibility.

In short, the chemical marketplace is not hurricane-ready. But while there is a 1-in-4 shot of a hurricane affecting a portion of the Texas-Louisiana coast home to chemical facilities, that also means there is a 3-in-4 chance of no hurricane effects at all. The market needs those odds to hold up.