Consumers will experience better days, and with newer clothes

Most of the statistics bantered about right now are coronavirus-related, which means they are monotonous at best and heartbreaking at worst.

Even New Zealand, which stood out as an example of how to handle the crisis, celebrated 100 days of no reported infections only to have four spring up a few days later, which spurred a series of measures to stamp out the small outbreak.

Let’s instead focus on some good numbers – green shoots, if you will, that portend to better days ahead.

Two sectors set to immediately benefit from the end of the pandemic will be apparel and recreational and cultural services. Both took substantial hits as coronavirus swept around the world and have remained mired in the economic doldrums.

Many white-collar workers traded in pressed collars for T-shirts and V-necks in work-from-home environments, while concerts remain grounded (unless you’re hosting a drive-in event where the Goldman Sachs CEO shows off his DJ skills and crowds appear to ignore social distancing guidelines).

Tours, museums and galleries are fighting to stay afloat as mandates and recommendations to avoid crowds have challenged decades of business-as-usual modes of operation. 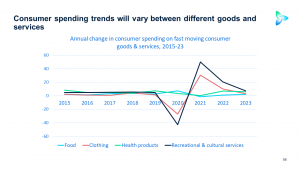 That all stands to change following the pandemic’s end, according to data presented this week by Richard Holt of Oxford Economics and Josh McBain of Foresight Factory during ICIS’s The Post-COVID Consumer Forum (video replays of both days’ sessions can be found here).

Year-on-year spending on clothing and recreational and cultural services is set to surge in 2021 with the expected improvement in conditions, including the ability to again be around more than a handful of people.

Whether their old office clothes will be out of style or out of size – or those T-shirts and V-necks are threadbare from repeated wearing – there should be a surge in demand for new apparel with the return of workers to offices, Holt and McBain said.

Similar pent-up demand is expected in the experience economy, as concert-goers, such as yours truly, will return in droves to venues, particularly outdoor amphitheaters where any residual concerns about being too close physically to others can be assuaged.

Movie theaters easily stand to recover, as many of them have been shuttered since the pandemic began in earnest in the US in March, although it remains to be seen just how many will survive their currently bleak state of affairs.

These developments will have direct and indirect effects on chemicals.

Increased economic activity means greater demand for polyethylene (PE) for packaging, caustic soda for industrial uses, polyurethanes for bedding, polystyrene for electronics, and so on.

As their precipitous drop in demand displayed their value to consumers as “wants” and not “needs,” a substantial uptick in demand would show that the “needs” are being taken care of again to a point where “wants” can and will be considered.

That would be a statistical and societal change to get excited about.