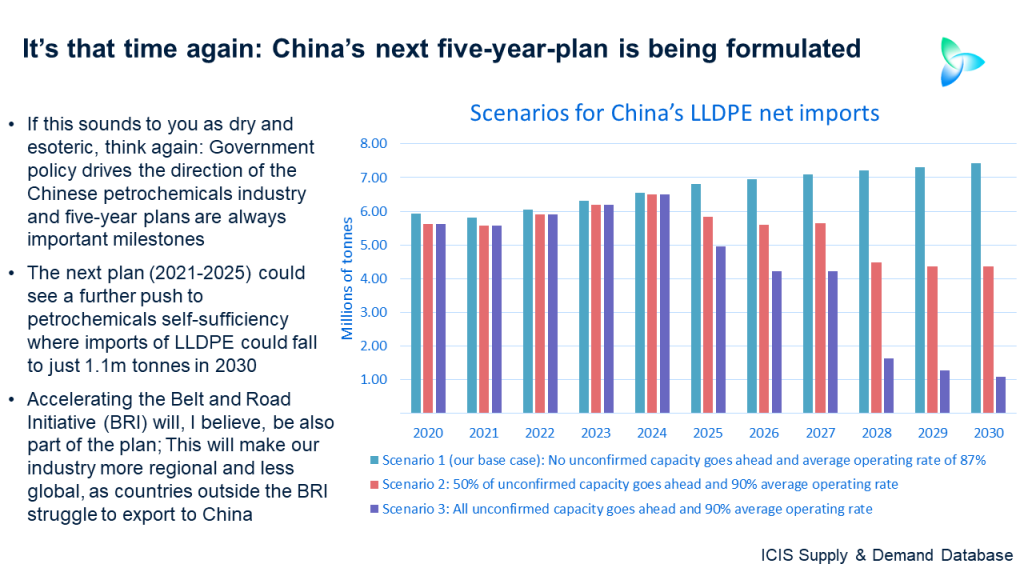 This is a critical moment because government policy largely drives the direction of China’s petrochemicals industry and the country’s new five-year plan is being formulated. A top priority of strategic planners should therefore be gaining the right understanding of the country’s new 14th five-year plan, which runs from 2021 until 2025. We already have some preliminary outlines with further details set to be released during the Chinese Communist Party’s next plenum meeting in October.

The direct implications for global petrochemicals

But I believe the direction of travel has been pretty much already set. This is based on my discussions with industry contacts and my interpretation of events. The direction will involve complete domestic petrochemicals and downstream self-sufficiency in value chains where this is feasible. Where this is not feasible, a concerted push towards “virtual” self-sufficiency will occur, via countries that form part of China’s Belt and Road Initiative (BRI). In other words, I believe that few, if any, imports will arrive in China from outside the BRI.

China, through its “domestic circulation” policy, will focus on raising its self-sufficiency across a broad range of industries, especially high-tech industries such as semi-conductors where it very vulnerable because of its widening spilt with the US. Domestic circulation is a cornerstone of the new five-year plan.

I believe that petrochemicals will also fall under the domestic circulation policy. This is partly because of the highly complex commercial and technical skills required to properly integrate a modern-day refinery with a petrochemicals complex. Adding to the number of local people with these skills would fit with China’s attempt to escape its middle-income trap through climbing up the manufacturing value chain – an objective of both this five-year plan and the previous two five-year plans.

Good integration is sometimes talked about very casually, as if all that is required is to build a cracker or aromatics plant next to a refinery. But achieving optimum integration requires, as I said, high skill levels that China will, I think, want to further localise.

Then think of going even further downstream into more production of speciality and fine chemicals. This would again raise local skills levels, with greater self-sufficiency in upstream petrochemicals raw materials improving the economics of local speciality and fine chemicals production. A model here could be the big Japanese petrochemicals-to-speciality-and-fine-chemicals corporations.

There is a lot of scepticism surrounding China’s ability to push into more sophisticated petrochemistry. For example, it is said that China lacks catalyst technology that would allow it to no longer have to import copolymer grades of PP. But in 2000, I was told that China would never build that many of its own crackers because it didn’t have the expertise. Look at how that worked out.

Geopolitical uncertainties will, I believe, also result in China pushing hard towards petrochemicals self-sufficiency. Why run the risk of being dependent on imports during a period of exceptional global instability, when imports could be cut off at any time?

Here is another thing: China has so much steel on the ground in PP,  styrene monomer and paraxylene  that it can very easily reach complete self-sufficiency in these products by merely ensuring that its plants run at high-enough operating rates. This is not a major stretch objective.

For an increasingly small number of petrochemicals and polymers, China is, however, a long way from self-sufficiency. The answer here might be to instead source all imports from fellow members of China’s BRI, as China creates the world’s biggest-ever free trade zone. This applies to, for instance, PE and ethylene glycols (EG).

Accelerating the BRI will, I believe be another aspect of the new five-year plan as China tries to secure its economic and geopolitical future.

In 2019, China’s median disposable income was just $3,831 compared with $45,284 in the US. This is why another key element of domestic circulation is boosting local consumption, which accounts for just 39% of GDP compared with 68% in the US.

You might argue that comparing China to the world’s richest economy is not a reasonable comparison given that China remains a developing economy. But even by developing country standards, economists view China’s consumption as a proportion of GDP as low.

The old issue of reforming land ownership rules will likely be discussed at the October plenum. Complete liberalisation may well be a step too far because of the nature of the Chinese communist system. But relaxing the rules could still unlock a lot more demand by giving rural residents improved control over land (asset ownership is of course a basis for personal wealth growth).

Further initiatives could also be introduced to tackle the widening gap between China’s haves and have-nots. The pandemic has increased the gap as post-pandemic stimulus has mainly focused on investment and manufacturing.

It therefore seems inevitable that a lot of the focus of the 14th five-year-plan will be on redressing the imbalance through pension and tax reforms. How can China otherwise boost its self-reliance if it doesn’t become a more domestic-focused economy – the whole point of domestic circulation?

Also expect further measures to raise the incomes of the left behinds in rural areas, where, as the South China Morning Post reports, the gap with rich coastal China has widened. As urban incomes continued to rise, the newspaper reported that rural incomes, excluding remittances from migrant workers, had fallen from 2014 up until the first half of last year. In H1 2019 alone they were down by a further 20%.

Unless you have a good economic and geopolitical relationship with China, I believe that you will have little chance of being able to take advantage of booming domestic demand. Think of all the petrochemicals and polymers that go into say smartphones or high-end automobiles made in the West that are exported to China. If the country in which you operate has fallen out with China, then your local petrochemicals sales into finished goods that are exported to China might suffer.

And even for those countries still in favour with China, local Chinese champions such as Huawei may increasingly dominate the domestic market.

A new business model is required

I do wonder about the survival of some of the petrochemicals companies that are heavily reliant on exports of PP, SM and PX to China. They at the very least will need to drastically restructure their businesses if they are to take advantage of the three new global megatrends: Localisation, sustainability and affordability.

Producers within the BRI region that are in the right products – such as PE and EG – may have a lifeline if China remains an importer. But to what extent will they be able to export to China? This leads me to the chart at the beginning of this blog post:

If you are therefore, say, a Middle East LLDPE producer (all the Middle East is in the BRI), you need a Plan B, which should again centre on localisation, sustainability and affordability.

And if you are outside the BRI with a heavy reliance on exports to China of any petrochemical? Mmmmm.

PREVIOUS POST Consumers will experience better days, and with newer clothes
NEXT POST When feedstock price isn’t the loudest voice in the room