Home Blogs Fundamentals will matter to plastics markets again, and be careful when they do

Fundamentals will matter to plastics markets again, and be careful when they do

Supply tightness in key commodities such as chemicals, polymers, lumber and steel has been a major story of 2021, but increasingly logistics are taking centre stage in this story as production of many materials ramps up only to find difficulties in moving products downstream to customers.

Shortages seen in the plastics and chemicals markets are unlike those being experienced with semiconductors where there is a true deficiency in production capacity due to explosive growth in demand for chips. While chemical company CEOs were quite effusive this quarterly earnings season about demand growth, that growth is in the mid-single digits and pales in comparison to the 17.8% year-on-year growth the semiconductor industry experienced globally in Q1 2021.

All the talk about robust, resilient chemical and polymer demand is worthy of discussion, and the industry should be lauded for the part it has played in fighting the pandemic and promoting healthier lifestyles. But before we host a parade for the supply chain, it would behoove the chain to remember where it was in pre-pandemic times less than two years ago.

The chart below comparing regional high-density polyethylene (HDPE) integrated production margins tells a bleak story for Asia producers increasingly under siege through 2019 from US exports made from advantaged ethane feedstock, only to find margin relief in 2020 from lower naphtha feedstock prices, higher HDPE prices and less interregional trade due to pandemic-related container shipping logistics challenges. Many of those same HDPE producers in Asia would love now to sell their resin in the high-priced Europe and US markets, but getting containers and ships to transport those containers is nearly impossible right now, as my colleague John Richardson and others have written about extensively. 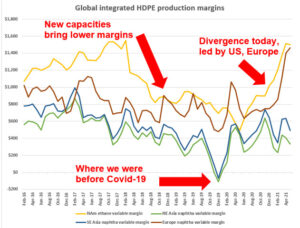 Today’s high margins in polyethylene (PE), polypropylene (PP), polyethylene terephthalate (PET) and polystyrene (PS) mask a crucial point that will become apparent again in the market at some point: Structurally, we have way more plastics production capacity than we need. With production economics varying greatly across the globe due to feedstock use and cost, co-product netbacks and final product prices, producers in regions in which feedstocks are not locally sourced and markets are targeted by exporters can find themselves disadvantaged at the least and operating unprofitable plants at the worst.

That was especially the case in PE at the end of 2019, while production margins thinned out in other commodity polymers as well. The accumulation of new polymer production capacities put into operation across the globe led to a fight for market share, which meant lower resin prices and tighter margins amid the competition for customers.

We have had a relentless pandemic since then, but when it finally passes, in its wake will again be overcapacity for plastic resin production. Those fundamentals have not changed, only the playing conditions temporarily, and within those conditions, production rates and volumes are recovering.

Amid all the talk about resilient polymer demand, it would be easy to think that the overcapacity that dominated the polymer markets until the end of 2019 has melted away or been soaked up by that resilient demand. It has not. Commodity polymer markets have more capacity than needed for consumption trends outside of a pandemic, and capacity growth is expected to outpace consumption growth in the next few years. Chemical Data points out in its April Monthly Petrochemical & Plastics Analysis that, in the first half of 2022, the PE industry will be entering the startup phase for a nearly 15% increase in new PE capacity totaling 9bn lbs (4.08m tonnes), all in a six-month period. A similarly sized increase in demand will not miraculously appear at the same time.

What will likely appear, though, is greater normalisation of global and regional logistics, which will spur producers’ efforts to compete aggressively for customers in regions outside their own and bring pressure to production margins. When logistics constraints loosen up, likely by the end of this year or early 2022, overcapacity will matter again and global production cost curves will come to the fore as disadvantaged producers and buyers mull their options. Those market players who anticipate and prepare stand ready to transact with confidence on the opportunities such turns in market cycles bring.