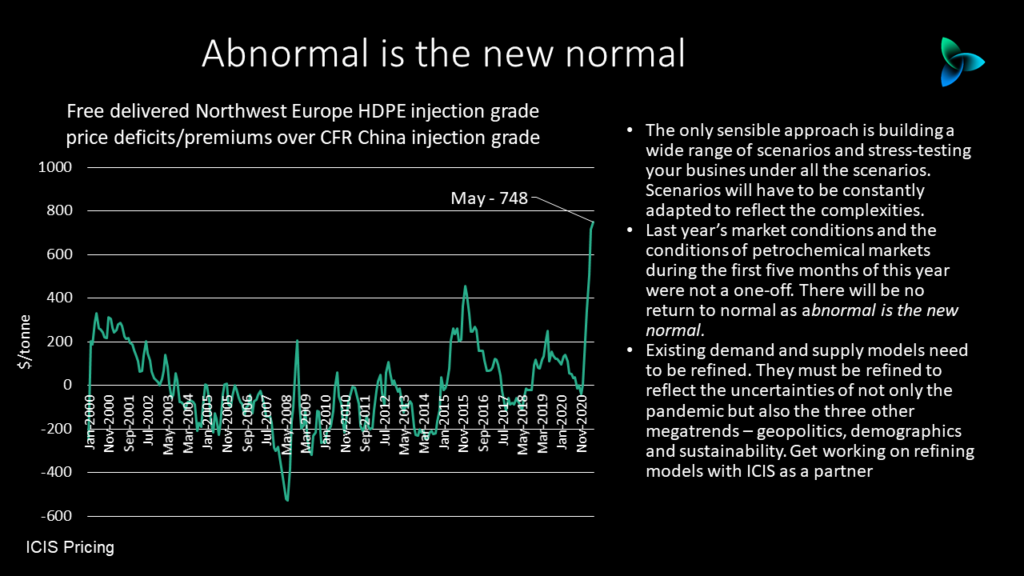 NICE WORK, if you get can get it. A trucking company in Fort Worth, Texas, is offering to pay experienced drivers $14,000 a week – $728,000 a year – as the US struggles with a nationwide shortage of truckers or lorry drivers.

This reminds me of perhaps an apocryphal tale, from the height of the last Australian mining boom. Before iron ore prices collapsed in late 2014, there was a story about workers at mining site road junctions who operated manual “Stop and Go” signs. They were said to be earning more than Australian dollar (A$) 200,000 a year.

Before you pack in your job as, say, a petrochemicals sales manager and head to Texas or mine sites in Western Australia, there is the risk that when you arrive at the door of your new prospective employer, the bubble might have already burst. This is assuming we are in bubble conditions.

The pressure is clearly building in petrochemicals and other commodity markets as prices in some regions remain at record highs or continue to rise.

Today’s prices are the results of shortages of commodities supply (for example in petrochemicals, an outcome of the US winter storms), very strong demand and supply chain disruptions.

I am beginning to believe that the latter is the biggest reason for commodity price inflation which is feeding through into sharp rises in the cost of finished goods – and a lack of goods availability.

It is delivering and manufacturing enough stuff that seems to be at the heart of today’s problems due to shortages of everything from container freight space and semiconductors to wooden pallets, tin cans, metal drums, cardboard – and US truck drivers.

Take the European polyolefins market as an example. Commodity grade supply remains extremely tight. This has created the strongest ever arbitrage conditions between Europe and other regions, as far back as ICIS pricing history goes.

But arbitrage for commodity grades remains largely theoretical because of the lack of container freight space, the cost of the space and the length of time it takes to ship to Europe.

Cargoes of polypropylene (PP) from Asia to Europe have been discussed recently, but delivery times are two to three months away. Any buyer who committed to such a deal would be taking a risk because of the potential that prices may have declined by then.

At least in the case of polyethylene (PE), however, relief could be on the way. In a few weeks’ time, once US producers have rebuilt domestic inventories, ICIS believes there should be enough container space to resume substantial exports to Europe. But watch this space because of the rapid pace of events.

An example of the speed of events is the knock-on impact of India’s coronavirus crisis on the global shipping business.

Early last week, the container freight business was forecast to return to normal in Q4 this year.

This forecast now seems in doubt because of ships being turned away from Indian ports – and because a large proportion of global crews come from India. More than 200,000 of an estimated 1.7m of the world’s seafarers are from India, said Guy Platten, secretary general of the International Chamber of Shipping.

Indian nationals are being placed into quarantine, reducing the global supply of shipping labour that only recently returned to normal. As many countries had earlier banned flights from India, it was already impossible to move Indian workers to ports around the world and swap crews, said the news service WENY in this article.

With no signs of India’s nationwide coronavirus crisis easing, despite infection rates falling in some of the big cities, might further India-related problems with the highly interconnected global container business leave the European polyolefins market even more isolated? If you think you know the answer, you are very probably wrong.

Sadly, also, a lot of the commentary out there is about a continued rapid recovery in the Chinese economy. I hate to be sarcastic but there is only one slight problem with this commentary. It is the data.

The Q1 2021 versus Q4 2020 data – including the numbers on petrochemicals demand – show a moderate slowdown, partly because of China’s exports being impeded by container freight and semiconductor shortages. What happens next in China remains entirely unclear.

A friend runs a wholesale food delivery business here in Perth, Western Australia. He is short of lorry drivers because he cannot afford the wages to compete with iron ore mines. Earlier this week, iron ore prices in northern China hit a new record high of $237.57/tonne, according to Fastmarkets MB.

The surge in iron ore prices is partly – and unintentionally – caused by an event entirely unrelated to the pandemic: the deteriorating relationship between the Australian and Chinese government. This had led buyers to stock up over fears of new tariffs.

A pandemic-related unintended outcome is labour shortages in the US. These are said to be the result of the Federal Government’s furlough scheme that set compensation at one national level.

In poorer areas of the US, this national level is way higher than average wages for workers in low-paid sectors. This has led to people preferring to stay at home rather than work, leading to shortages of service sector workers. Some plastic processing lines have been shut down due to furlough-related labour shortages.

Back to Australia, where our Federal Government has, to put it generously, not handled the vaccine rollout particularly well despite ample supply. There is no clear pathway to when international borders will reopen.

This is making it even harder for my friend to find lorry drivers because of a lack of immigration. We have an ageing Australian-born population, making us heavily dependent on immigration for labour supply. The Australian economy has always been driven by two things – resources and immigration.

Canberra obviously didn’t want this outcome and criticism with the benefit of hindsight is very easy. Tight Australian labour markets resulting from restricting immigration to keep the pandemic under control serve as another example of unintended consequences.

I have just dipped my toe in the ocean. I am sure there many more unintended consequences of government policies across every country and region. This crisis is unprecedent and so, of course, no set of policies will be perfect.

Yesterday, today, tomorrow and the day after

If you thought the outlook couldn’t get any more uncertain and complex, you experienced yesterday.  Today, tomorrow and the day after will bring more complexities.

What yesterday brought was a second session of retreating stock markets on inflationary concerns. This was the result of a 4.2% year-on-year jump in US inflation – the biggest rise since 2008 and a significant leap compared with the 2.6% in March, said the Financial Times.

Does this mean we are in an inflationary bubble that has to pop? Not necessarily because of the base effect. These increases may mainly reflect large, inevitable rebounds from falling prices in 2020.

The supply chain problems I have updated above may also only be temporary. Once you strip away short-term shortages of wooden pallets and containers etc., underlying inflation may be weak. For what it is worth, this is my opinion.

Or is inflation our biggest worry?

What must you do? In my view, it is the following five things:

Good luck out there and please stay safe.