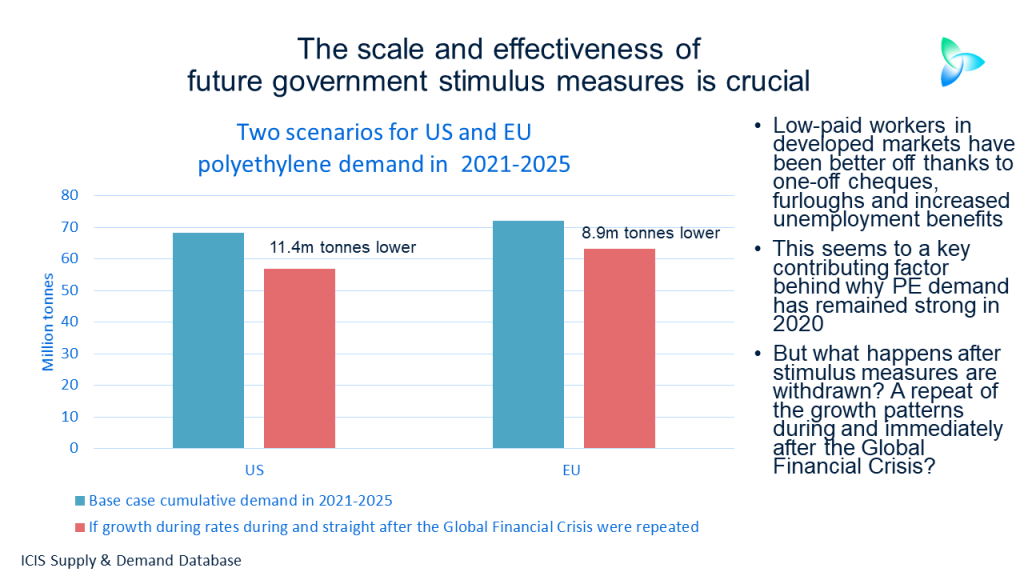 THE WORD on the street – what market participants have said about the polyethylene (PE) market – has portrayed a very consistent story since the pandemic began: Robust demand, despite what on paper is an enormous loss of incomes and wealth.

One theory put forward to explain the resilience of demand is that people obviously have to eat and in developed markets they have no choice but to buy their food packaged in PE. Medical needs have added an extra spike to consumption, such as buying extra bottles made from high-density PE (HDPE) and containing disinfectant, as has stocking up on food and other essentials at the height of lockdowns.

Some analysts go as far as to suggest that there is nothing new here beyond a little extra boost to demand provided by medical needs and stocking up. They claim that there has never been that close a link between the loss of incomes and wealth because the majority of PE end-uses, especially low-density PE (LDPE) and linear-low density PE (LLDPE), are for packaging essential items.

Because the items packaged in PE are essential, you carry on buying them, even if you lose your job. You might buy a cheaper brand of potato chips, or crisps, but you still buy chips.

But the data from our ICIS Supply & Demand Database doesn’t support this argument. Focusing on the two biggest developed markets in the world, the US and the EU:

This proves that there is a strong link between declining incomes and wealth and PE demand, as of course 2008-2009 marked the high point of the Global Financial Crisis.

And yet we forecast that US consumption will fall by just 1% this year before returning to positive growth of 2% in 2021.We expect EU growth to slip by only 2% in 2020 before climbing to a positive 2% in 2021.

Why does demand seem so much more resilient this time around even though the economic shock is today much, much bigger than in 2008-2009?

The medical needs part of the picture is very small. Before the pandemic, the global HDPE bottles market is for example only around 5% of total HDPE demand, according to my contacts. Let’s say demand this year tripled to 15% of the total. This wouldn’t compensate for lost demand in the HDPE pipes market (some 20% of the HDPE total) because of the collapse in construction activity.

Stocking up is always followed by destocking. At the height of the lockdowns, people bought enough potato chips etc. to last them many, many months. Now that lockdowns are easing, market intelligence suggests the average amount of food in shopping baskets is declining as customers live off the contents of their larders.

The answer, in my view, is that what has happened since the pandemic began is that government stimulus has cushioned the impact of lost economic opportunities.

The Global Financial Crisis involved a credit crunch when the average income earner was short of spending power. Data from retail consultants show that average shopping expenditure went down as people avoided extra tubs of ice cream and bars of chocolate.

This time, though, average income earners are flushed with government cash thanks to one-off payments, increased unemployment payments and furlough schemes. Anecdotal evidence also suggests that people have spent more on indulgences, such as a family-sized bar of chocolate for just one person, as they have been bored and stuck at home.

Rising unemployment normally results in rising US poverty, according to The Economist. “The recession of 2007-2009 prompted the share of Americans classified as poor, on a widely used measure, to jump from 12% to 17%,” writes the magazine.

Employment subsidy programmes have maintained 45m jobs in Germany, France, Britain and Italy and Spain, a third of the combined workforces of the five EU countries, reports the Financial Times. The schemes are credited with preventing Europe from seeing the big rise in unemployment experienced in the US.

But what is going to happen as government stimulus is withdrawn, tapered and restructured?

More space in restaurants and more time at home

It is a mammoth gap. Republicans and the White House want to inject a further $1tr into the US job market but Democrats are calling for $3tr. A compromise may well be reached.

But here’s the thing: even assuming that the $600 a week unemployment insurance scheme is renewed (it may actually be cut to $300 a week), the $1,200 cheques sent  to individuals earning less than $75,000 per year were a one-off. Schemes for freezing mortgages and forgiving loans to small companies are also due to come to an end.

The positive effect on US consumer spending from the one-off cheques is expected to fade away in July, with the end of July marking the end of the unemployment insurance scheme.  In the EU, furlough schemes are due to end in the autumn.

Even if deals are reached in the US and the EU for major extensions of the unemployment and job-support schemes, this type of spending cannot go on forever. As The Economist again writes: “Rich-country governments have collectively launched stimulus programmes worth 10% of GDP, with one-third of that either subsidising work or compensating people who lose it. Before the year is out, government deficits in these countries will easily be in double digits.” The pressure to rein in debts is bound to build.

And at some point, industries that are on life support will have to be taken off life support. Only then will we find out to what extent they can breathe on their own.

Think of all the restaurants where seating capacity has been permanently reduced by 50% or more because of essential social distancing. Once restaurants reopen and their employees stop receiving unemployment insurance or come off furloughs, many restaurants may find running at only half capacity no longer viable. That’s if they decide to reopen at all.

The same fate awaits many bars which thrived on “standing room only”. Long-term reductions in air travel and tourism look likely to wipe billions of dollars off the growth of the global economy while costing many, many jobs.

Also consider business travel. Now that your company has found out that Microsoft Teams and Zoom work perfectly well as networking and sales tools, it seems likely you will be spending much more time on the ground and at home rather than in the air, in hotels and in face-to-face meetings.

Many of those who can work online should be fine. But for the millions of lower-income workers in service industries, the future seems perilous. It is thus essential that you plan for downsides for PE demand and treat 2020 as potentially a one-off year.

Perhaps part of the answer for the US lies in universal incomes which even the Nixon White House was considering in the 1970s. In the EU, where the appetites for dealing with climate change and plastic pollution are strong, hundreds of thousands of new jobs might be created by a Green New Deal (but this would of course have the negative effect of reducing demand for virgin PE).

But can we afford any such schemes given the scale of government debt? A lot will also depend on how politicians of different hues work together. The extent of partisan divisions in the US suggests to me that solutions will be difficult to reach.

Let’s therefore use the history of the patterns of US and EU PE growth during the Global Financial Crisis and in the years immediately after the crisis (2008 until 2012) to work out what could happen during another five-year period – 2021 until 2025.

History never exactly repeats itself and so these projections will be wrong. But I at least hope they help you contemplate the scale of the risks ahead for the PE business. As I said, 2020 may turn out to be an atypical year – as good as it gets for a long while.

Repeat the same exercise for the EU and downside demand reaches 12.5m tonnes in 2025 versus our base case of 14.8m tonnes. On a cumulative basis in 2021-2025, consumption would be 8.9m tonnes smaller.

As I said, this isn’t going to happen as history never exactly repeats itself. But don’t assume that the support that the market has received in 2020 will continue. And whatever the outcome, it stands to reason that the changes to PE and other petrochemicals markets caused by the pandemic will be profound and permanent.