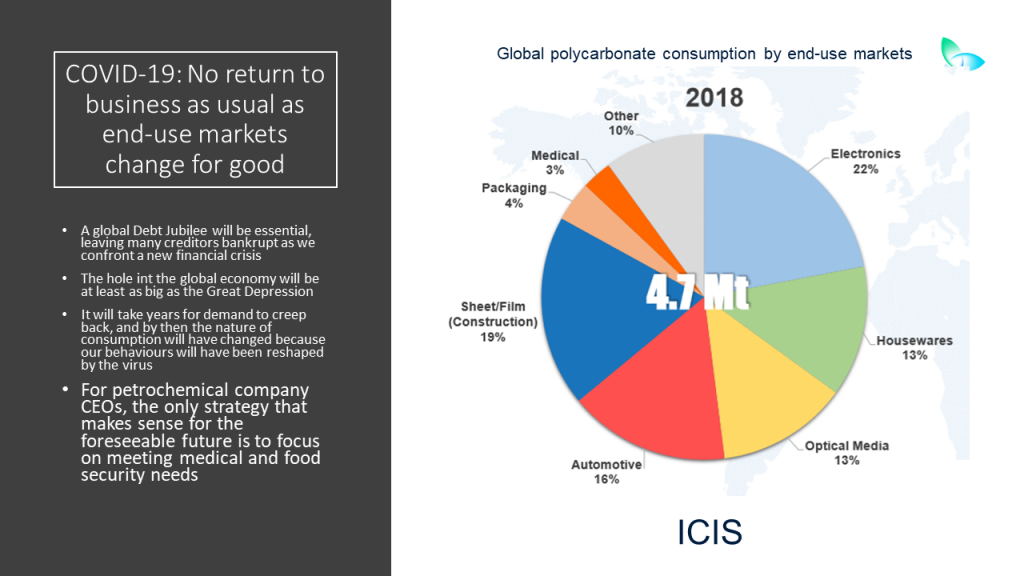 SEVERAL contacts have said to me over the last two weeks that increased medical and food security demand for petrochemicals is a distraction from coming to terms with the huge collapse in demand for all of our products that go into the durable goods which people are no longer buying.

I agree entirely as I’ve been making this case for several weeks before it became accepted wisdom. The above chart illustrates the point well, using just polycarbonate as an example, the raw materials for which are phenol and further upstream propylene and benzene. As you can see, even assuming a strong rise in demand for protective sheets made from polycarbonate, the loss of autos demand will leave global demand much smaller over the next few years.

But some of these contacts have gone on to tell me that a return to normal consumer demand is only just around the corner, perhaps as little as a few months away as we get on top of the virus. Their worst-case scenario is that the recovery will happen sometime in 2021.

This is where I differ. I cannot see any return to normal patterns of consumer demand for several more years because the negative demand shock of the virus will I wory be at least as big as the Great Depression.

Even assuming the West can quickly get on top the crisis, we must consider the scale of the damage to the developing world. Also think of the loss of hundreds of millions of gig economy and service industry jobs. These job losses could weaken spending on non-essential items for several years to come.

Political dysfunction means we were not  adequately prepared for the pandemic, making its effects worse than would have been the case if we had better leaders.

I also see a debt crisis as likely. We didn’t learn anything from 2008. The cures for the Global Financial Crisis have instead created an even bigger debt hole than in the build-up to 2008 – something I have been warning about for several years.

Our spending behaviours will changeover the long term. For instance, a stronger sense of community could to a greater value being placed on experiences over owning things. Communities will naturally strengthen as always happens in times like this.  Less of us  may be willing to get on planes for leisure or business. Our employers may not allow us to do so as a result of new corporate risk policies.

In other words, I worry that there will be no return to the old consumer markets we were familiar with before the crisis. When it is all over, I believe we will need new ways of measuring the patterns of demand because the nature of demand will have undergone so many radical changes. This will require us to rethink what quantities of petrochemicals and polymers we make and what grades of polymers.

If you are a CEO of a petrochemicals company don’t think of meeting medical and food security needs as a temporary priority that will quickly disappear. Prepare for the long haul while of course hoping for a better outcome.

Petrochemical company C-suites need to work with governments to ensure that manufacturing value chains function properly, so we have enough medical equipment, hand sanitisers, protective screens, face masks and food and other packaging materials. This should be their main focus.

The reputational gains for our industry will be huge. People will understand the value of what we do much better by understanding what we actually do – for example, there will be hardly anyone left when this crisis is over who won’t know that modern food supply chains would collapse without plastic packaging. No longer will plastic packaging be only seen as a scourge of the environment.

Further, if the petrochemical companies work closely with governments, they will get the financial support they need to stay in business. Financial support won’t come without any strings attached. The strings will include retooling production to meet medical needs and ensuring that food supply chains remain intact.

PREVIOUS POST Be very, very cautious about buying into the idea of a Q2 crude price rally
NEXT POST After COVID-19: How US petrochemicals could become the laggard