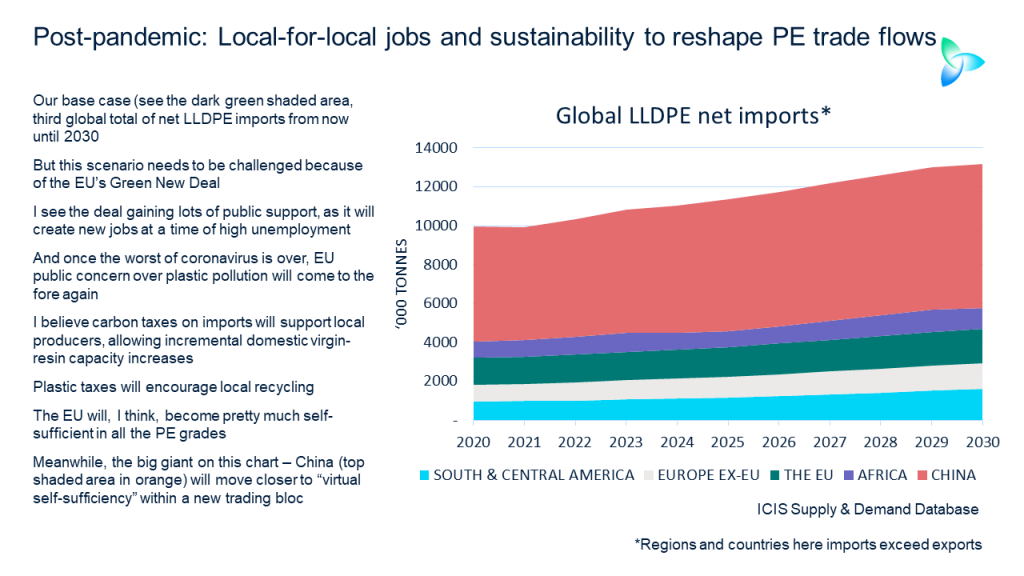 ONE OF the many unknowns about the post-pandemic world is the extent to which the backlash against plastic rubbish will be revived. I certainly hope it is revived, otherwise, combined with climate change, our future looks pretty grim.

How will the public – and thus those legislators who need to be elected – respond when the extra value which is today being attached to single-use plastics dissipates? The extra value is public recognition that modern food-supply chains wouldn’t work without single-use plastics. This is of course something that everyone in the petrochemicals industry has known for decades.

Perhaps the wake-up call will come when Westerners can once again travel to the beaches of Bali or Phuket and see for themselves the toxic horror of piles of needlessly discarded plastic. This has always been a collection, recycling and disposal problem and not a problem with the products themselves, which, as mentioned above, provide substantial societal and economic value.

Or rather – and we are seeing this in the EU right now – the cart may come before the proverbial horse. It could be that legislators take the lead by successfully implementing the EU’s Green New Deal. The deal promises to create lots of new jobs which would add to already strong EU public opinion in favour of a cleaner environment.

The European Commission’s €1.85tr seven-year budget and pandemic recovery package includes a carbon levy on non-EU imports and a plastic tax. The carbon levy would generate revenues between €5- 14bn a year with the plastic tax raising €6.6bn, according to the Commission. The money would help fund the rescue package.

The Commission’s long-standing Just Transition Fund, aimed at addressing the social impact of greening carbon-heavy regions, will be increased to €40bn from €7.5bn. The wider Just Transition Mechanism, which funds the shift to clean energy, is to be boosted to €150bn from €100bn.

What is there not to like about these initiatives for many EU citizens already highly sensitised to our environmental crisis, especially when you add in all the new jobs at a time of high unemployment?

Implications for the European and global polyethylene businesses

Sure, polyethylene (PE) producers with feet in both camps, those with production in both the US and the EU, might resist the carbon tax. The EU is a major importer of high-density PE (HDPE) and linear-low density PE (LLDPE) with a big percentage of the imports arriving from the US. European producers may also push against the plastic tax.

But as King Canute allegedly found out, reversing the tide is an impossible task. EU public opinion might have warmed a little more to our industry over the last few months. But if we are viewed as standing in the way of legislation that promises to create lots of new jobs, we will once again be branded as merely a bunch of “dirty old polluters”.

Before the pandemic, there was already a strong public backlash against globalisation, not just in the EU but in other regions as well. The great thing about the recycling business is it is local-for-local – it creates local jobs for local people as moving plastic rubbish long distances is environmentally and uneconomically unsustainable. The recycling industry ticks the box of more regional and less global trade.

You may think I am wrongly connecting climate change with the plastic-rubbish crisis as these are two very separate scientific issues.

But they are connected. Why allow, say, US PE to arrive in Europe without a carbon tax when it has had to travel thousands of kilometres by container ships using bunker fuel, and when nobody knows the amount of greenhouse gases generated during its production? Nobody can accurately estimate fugitive methane emissions from shale-gas wells.

Why let any PE producer, whether an importer or a local producer, take no responsibility for the final disposal of the polymer pellets they have manufactured? When polluted beaches in Bali and Phuket are back in the public’s crosshairs the pressure for more legislation will build.

Ultimately, I see producers being economically incentivised to clean up beaches in the developing world. They will have to pay for rubbish collection and recycling systems in Indonesia and Thailand if they want to avoid taxes or gain credits. A whole new green cost curve will, I believe, develop. The EU may add to taxes on plastics, or create a credits system, to achieve this objective. The developing countries may themselves join the legislative push.

And I see much less global trade in PE in general as a result of both the rise in mechanical and chemicals recycling and the accelerated pace at which we are moving towards a bipolar world, again thanks to the pandemic that has increased US/China trade and geopolitical tensions. China’s economic and geopolitical partners will become almost a self-sustaining region with little need to import PE and other raw materials and finished goods.

The EU will, I believe, also become pretty much self-sufficient in PE through a combination of tariffs that restrict virgin resin imports, thereby allowing local producers to make incremental virgin resin capacity expansions, and mechanical and chemicals recycling. The effect on global trade balances will be big:

There will still be plenty of room in the post-coronavirus world to build new steam crackers because of the technical and economic limitations on the extent to which recycled PE can replace virgin PE. But choosing the location of new crackers will have to be much more selective.

Further crackers in the US don’t make sense in my view because of the schism with China, the  introduction of carbon tariffs by the EU and the rise of recycling in the region.  Feedstock advantage – i.e. cheap ethane – will no longer be the main investment driver.