There should be little doubt that government policies across the globe will play a critical role in stimulating, rebuilding and reshaping economies staggering from the damage wrought by the coronavirus pandemic, which came at the time most were pushing forward with burgeoning sustainability and circularity efforts.

Whether through ambitious “new deal” kinds of programmes, hands-off, free-market legislation or even no new policies at all – because status quo is pretty much a policy in itself – government actions regionally will have a large effect on the global stage, producing new trade routes and markets while bolstering resiliency in some previous ones and effectively ending others.

My colleague John Richardson laid out an outstanding keynote blog on this topic earlier this week, and you would do well to enjoy each of the 1,480 words he crafted. In the same vein, I would like to take a look into where we might be headed in regards to a grade of polyethylene (PE) that has grown rather significantly in use and thus importance, but its rate of recycling has not kept up – linear low density (LLDPE). 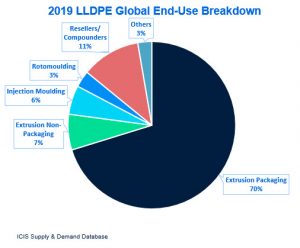 If you go to the grocery store – and recent US Census Bureau stats show that we’ve been going more this year than last, so I’d say you do – you would easily recognize its uses in films such as plastic wrap, stretch wrap and pouches. In fact, more than 80% of global LLDPE is used as film for food and non-food packaging.

LLDPE’s usefulness has fuelled its growth in market share in film applications as well as in global production of the polymer. Total global capacity in 2012 was 30m tonnes; by 2025, ICIS projects it to be more than 56m tonnes. In that time, North America will have nearly doubled its production capacity for LLDPE, while Asia will have more than doubled its capacity. The Middle East will have increased LLDPE capacity by 55% during that timeframe as well.

However, LLDPE has a major drawback – it is not easily recycled, or at least the infrastructure is not in place currently to do it efficiently. It is excluded from many curbside recycling operations, and LLDPE film is typically contaminated after use by the food or other substances it was used to package. Trying to wash used, stuck-together film seems about as easy as walking a cat on a leash. Innovation is needed here, and that is where government policy and economics come in.

The current Base Case for global LLDPE demand from the ICIS Supply & Demand Database calls for 4.4% growth on average annually from 2019 to 2025. That takes into account assumptions that the global pandemic ends the middle of 2021 and economies return to pre-pandemic levels of activity and growth. LLDPE plant utilisation rates would average 84% by 2025 – a solid rate that justifies all the investments made to build out capacity for the product. Meanwhile, just 4.5% of global LLDPE demand would be met by recycled material.

Let’s alter some policies now and see the possible ramifications. I have devised three other possible scenarios, and while it is unlikely they or the ICIS Base Case will play out exactly as laid out, some form of them will. 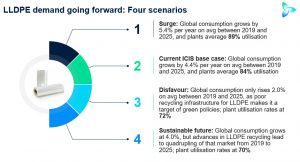 Under the Surge scenario, governments pump large amounts of stimulus into their economies, focusing more on putting cash in consumers’ pockets to do what they do best – consume. Emphasis on growing recycling is mostly left to the private sector except in regions where such public policies have already been set into motion. Low feedstock prices for virgin resin production keep LLDPE prices too low for converters and brand owners to ignore. Global LLDPE consumption grows by 5.4% on average annually between 2019 and 2025, and plant utilisation rates average 89% by 2025. Life is good if you are a producer, and you are likely drawing up plans for further capacity additions. LLDPE buyers are not complaining except when a plant goes down and makes global supply extremely tight due to the high utilisation rates in the market. Recycled LLDPE is out there, but makes up just 4.3% of overall consumption.

Both of the above scenarios could play out well for producers and the current structure of the LLDPE value chain. However, it is just as likely that one of the following scenarios will play out, and the outcomes would be quite challenging for links in the chain.

Under the Disfavour scenario, the major economies of the Americas, including and possibly even led by the US, embark on an ambitious journey towards sustainability and circular economies, enacting so-called “Green New Deal” policies such as taxes on plastics and carbon, as well as bans on various types of fossil fuel production, that quickly put LLDPE in a bearish situation. Perhaps something similar to the Break Free from Plastic Waste proposal is implemented in the US that institutes an extended producer responsibility (EPR) system that puts the onus of waste reduction on resin producers.

While LLDPE resin is not banned, added costs of production raise prices and substantially impede its consumption growth worldwide, leading to just a 2.0% average annual growth rate from 2019 to 2025, with most of that growth coming earlier in the period as biopolymers, paper and reusable packaging become preferred alternatives. Plant utilisation rates fall to 72%, likely leading to considerations of closures of plants operating either at the high end of the cost curve or in regions that have no place to send excess LLDPE.

On the recycling end, little new innovation occurs through 2025 to jumpstart LLDPE recycling, but subdued overall demand growth for virgin resin means the share of recycled LLDPE consumed rises to 5.2% of the market, because at the least using recycled LLDPE plays better in the altered marketplace. In this scenario, an LLDPE producer and user might not be welcome at a neighbourhood dinner party, let alone at the negotiation table.

A fourth scenario provides a bit more balance, but still presents challenges. The Sustainable Future scenario incorporates ambitious sustainability measures – larger than the aforementioned “Break Free” proposal – within government stimulus policies to reshape and rebuild economies. From a US standpoint, think of it as doing an amplified “Break Free” mandate targeting waste alongside an amplified version of the proposed RECOVER Act to boost recycling infrastructure. These measures create a viable recycled LLDPE supply chain that more easily allows used LLDPE to be processed and reused. LLDPE is viewed as an important material in preventing food waste and in being able to feed the world. Its overall demand growth increases by 4.0% on average annually from 2019 to 2025, but a growing part of that is made up of recycled material – nearly 19% by 2025, in fact, as recycling technology, mandates and incentives lead to a quadrupling of recycled LLDPE consumption in this scenario as compared to the ICIS Base Case. That takes a toll on virgin LLDPE producers, though, as utilisation rates decline to 70% by 2025 and rationalisation of plants is squarely top of mind in chemical companies’ C-suites.

Beyond the ICIS Base Case, these scenarios and assumptions are projections I have thought up. While it is unlikely that any of these four scenarios will exactly come to pass, some form of them will, and a major point of scenario building is analysing where the challenges arise, how often those challenges pop up, correlations that can be drawn and lessons that should shape our forward thinking.

The major point that jumps out from the above four scenarios is that it does not take much additional push in regards to recycling LLDPE to significantly dent virgin polymer demand, even amid increasing demand for the resin. While the Sustainable Future scenario uses a quadrupling of expected 2025 consumption from the ICIS Base Case – going to nearly 9m tonnes from 2.24m tonnes – just doubling that Base Case expectation to about 4.5m tonnes results in a utilisation rate at LLDPE plants of nearly 78%. When the plans for those plants were drawn up last decade, they were not with the expectation of running at 78% capacity by 2025.

Thus, it is critical that the LLDPE chain stays on top of policy developments in the next 12-18 months, as it seems likely that the myriad measures governments will undertake as their countries emerge from the pandemic will set the marketplace on a course for overcapacity or undercapacity by mid-decade. Those who understand the implications of the adopted policies set themselves up to pivot towards the opportunities amid the market’s reaction to the measures.