Last week, the blog took a look at how government policies could shape a market such as that for linear low density polyethylene (LLDPE). The scenarios analysed uncovered a major point: A major upsurge in demand above the 2.24m tonnes base case for 2025 jeopardises operations for disadvantaged LLDPE plants globally.

However, the demand for recycled material was looking at mechanically recycled LLDPE – material picked up following consumption, sorted and recycled into further use. As most know, recycled plastic does not perform as well as virgin material and can only go through so many recycles before being useless. And when it gets to the useless stage, it still has to go somewhere, too often to a landfill. 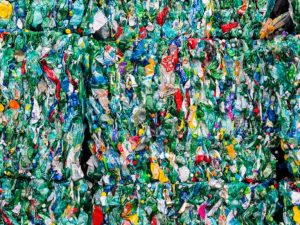 Enter the panacea that would be chemical recycling – technology that can turn plastic and chemicals back into their monomers and building-block materials, which in turn would allow them to be remade into virgin materials.

This magic bullet for the world has proven to be mostly magic at this point, even though many companies are investing heavily to develop commercial-scale capabilities to take plastic waste and convert it into fuel or naphtha feedstock.

It is a topic that is seeing an increasing amount of headlines on ICIS News thanks in part to investments made by virgin chemical producers such as INEOS, Total and LyondellBasell. Also, there are a host of start-ups and others pouring resources into chemical recycling even amid the current global economic and energy downturn.

ICIS’s Al Greenwood wrote this week in his Insight into Agilyx, a relatively young company that is developing chemical recycling and just listed its shares in a Norwegian equity market, that “given today’s low oil prices, this would seem to be a less than ideal time for a recycling company to pursue stock listing”.

That is fair, but there is an argument to be made that developing chemical recycling technology amid a low oil-price environment is the best time to do so. If chemical recycling is developed to be scalable and competitive during low crude oil prices, it becomes economically advantageous when crude prices rise — in other words, it can handle both extremes. Also, if chemical recycling truly takes off, it would help push crude oil prices lower, as there would be less demand for crude for chemicals and plastics in that future time, which would coincide with increasing electrification (or even hydrogenation) of the transportation fleet.

If chemical recycling takes off and is scaled up, it could be a saviour for the virgin plastics industry, as it could allow operating rates to remain robust while putting a significant dent into the waste problem. Producers could “have their cake and eat it too” – keeping operations profitable while also tackling one of their biggest PR dilemmas. Consumers and brand owners would benefit from better plastic product performance and a cleaner environment.

What is fascinating as well from a North American perspective is that those chemical producers with flexible crackers would be beneficiaries. As noted above, chemical recycling technology is focused in particular on turning plastics into naphtha. The crackers built in the last decade in North America are ethane-based and cannot crack naphtha. That was on purpose because the ethane advantage has been so steep that it did not make since to invest in making them flexible to other feedstocks. However, the legacy flexible crackers here can crack naphtha and would stand to benefit from the environmental “good news” story of turning today’s garbage plastics into tomorrow’s virgin resins. 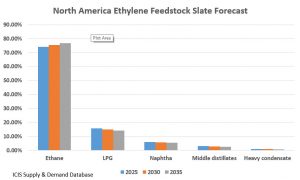 At present, the ICIS Supply & Demand Database forecasts 6.11% of North American ethylene production to come from naphtha cracking in 2025 before dropping to 5.79% in 2030 and 5.48% in 2035. During those times it loses share to ethane, which grows to 76.79% of ethylene feedstock slate by 2035. If chemical recycling does take off and commercial scale plants are built near flexible crackers to process waste plastic into naphtha, naphtha’s share of the slate might grow a few percentage points, but not to the detriment of ethane. It would take share from liquid petroleum gas (LPG), middle distillates and heavy condensates, which combined make up about 21% of the ethylene feed slate. Hence, it could be a win-win for ethane cracker and flexible cracker operators.