Thirty days ago, US President Donald Trump felt confident he was on his way to a second term, while election opponent Joseph Biden felt he was on the way to his first term on the back of a host of polling data showing him possibly leading a “blue wave” of Democrat victories. The fall football season in the US was in full swing and, despite some early hiccups amid the pandemic, was proceeding along as life here seemed to be inching towards normalcy – or at least much more normalcy than we had seen in several months.

Consumer sentiment was more positive as well, as evidenced by a recently released Nielsen Audio survey that found 53% of respondents in October believing that they were likely to resume activities typical of pre-pandemic times.

Thirty days later, it seems all those good October vibes have not played out as many expected.

US election results proved that polling continues to be an inexact science, with the presidential race much closer than many had forecast and Trump contesting the yet-to-be-certified results. The football season is beset with pandemic-related cancellations and postponements, as a surge in infections is leading to further restrictions on economic and social activities heading into the holiday season.

Momentum from consumer spending is beginning to founder as well. US retail sales for all of October grew at 0.3%, below economists’ expectations for a 0.5% rise. More forebodingly, when you strip out necessity spending on autos, gasoline, building materials and food, retail sales only rose 0.1% in October after having risen 0.9% the month before.

So was the Nielsen survey from the same month wrong? No, it is just that conditions on the ground have changed dramatically and in similar fashion to how quickly circumstances changed in March at the onset of the pandemic in the US. In early October, there was a lot of optimism, as relatively lower infection rates had led to greater loosening of restrictions. Many schools allowed in-person instruction again, and sports leagues that had delayed start-up got going – it started to feel a bit more like a “normal” fall.

But now in mid-November, virus infection rates are spiking, and states are, or will be, implementing additional measures to curtail the spread. Those will likely further dampen economic conditions. However, unlike the previous abrupt situation shift in March, the economic cavalry does not seem to be coming anytime soon. With Trump’s focus on contesting the November election and many Republicans following his lead, consensus with the Democrat opposition on new economic stimulus legislation looks unlikely before a Biden administration takes office in late January. 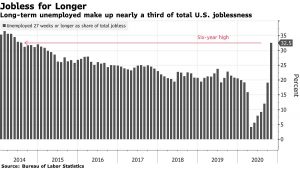 The unemployment remains high at 6.9%, with 11.1m workers still jobless. This Bloomberg chart of data from the US Department of Labor Statistics shows that a third of those unemployed have been so for 27 weeks or longer – the highest rate of long-term unemployment since 2014. Those counted in the unemployment rolls are those who are still seeking jobs, which depressingly means that there are lots of people out of work who have tried for months to find work but cannot.

Thus, this holiday shopping season is looking bleak for those supplying to or making electronics, appliances and other consumer durables – those big-ticket types of gifts. Consultancy Deloitte’s survey found that shoppers expect to spend about 7% less year on year this season overall, with a 34% drop in travel spend leading the way. The current trajectory of the virus, mitigation measures and slowing economic conditions means supply chains that support consumer durables should prepare accordingly.

On the other hand, perhaps more positive news regarding vaccines will come in soon, similar to recent announcements from Pfizer and Moderna, spurring businesses to pick up activity and employment on expectations that economic recovery from the pandemic is right around the corner. Perhaps even the executive and legislative branches of the US federal government may find some common ground before Christmas to lend support to consumers fighting to make ends meet.

All of that is possible – and it would not even take 30 days.