3 stimulus possibilities under the Biden administration

US president-elect Joseph Biden has called the recently passed $900bn second round of coronavirus-related economic stimulus a down-payment to what he will promote passage of after he is sworn into office on 20 January 2021.

What that third round of stimulus will look like will be shaped in part by the two 5 January 2021 US Senate seat runoffs in the state of Georgia. If the Democrats win both seats – a slim but possible outcome – it would leave the Senate in a 50-50 tie but would give Senate control to the Democrats, as forthcoming Vice President Kamala Harris as president of the Senate under the US Constitution would serve as the tiebreaking vote.

Biden’s wish list towards “Build Back Better” gets a lot easier to enact if the Democrats control the Senate. But even in a Democrats-take-all scenario in which the party pairs Senate control with their current majority status in the House and a Biden administration, their slim majorities in the legislative branches as well as Biden’s moderate stances on many issues would mean that a far tilt to the left is unlikely.

So what seems likely to come in a third round of stimulus likely to be enacted in the spring, and how will it affect the chemicals and polymers industries? Three possibilities come to mind, all of which under the premise that Biden and the Democrats will need some conservative support. Even if the Democrats end up with control of the Senate via that 50-50 scenario, there are a few Democrat senators who serve in states that voted for Republican Donald Trump who do not want to go far afield from their constituents’ leanings and risk their own political futures. 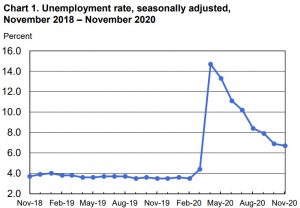 Jobs jobs jobs – Biden has said he envisions creating a “Public Health Jobs Corps” to help in fighting the pandemic and fueling the economic recovery. The ambition would be to hire at least 100,000 new contact tracers as part of a national workforce focused on finding and quelling Covid-19 hot spots. But with a US unemployment rate at 6.7% and 10.7m out of work, there is a great deal more job need than such a health jobs corps could fill. Biden campaigned on creating 10m clean energy jobs via investment in combatting climate change, but even if such policies were enacted, those jobs would not be created overnight. In meantime, stimulating a sizeable reduction in the unemployment rolls could be focused on providing Covid-19 recovery funds to small businesses to help them retain and rehire workers and restart businesses such as those in the service sector shut down by depressed demand caused by the pandemic.

Paving the road to recovery – As this blog has previously touted, the time may finally have come for coalescing around a large national infrastructure investment bill. The pandemic illustrated to all facets of the American political spectrum the need for greater resiliency and regionalisation of supply chains, and those chains are supported by optimised logistics equipped with the latest technological, architectural and structural advances. While roads, bridges, railways, ports and telecommunications easily come to mind when thinking about infrastructure, one part of infrastructure that rarely gets talked about is health-care construction. Richard Branch, chief economist for Dodge Data & Analytics, recently noted that the pandemic laid bare the lack of surge capacity at hospitals and disproportionate bed-capacity at those facilities in comparison with the population of the area they serve. With the focus in the last couple of decades on building out-patient facilities, hospitals in many US regions have not grown bed-capacity to match population growth. Infrastructure dollars focused towards alleviating that short-coming could be a proposal that garners bipartisan support.

Targeted tax relief – Trump introduced via executive order a temporary payroll tax deferral back in the fall, and while that effort ultimately fizzled, it showed that some tax relief could be enacted via presidential order if Biden desired. That should not be necessary in Biden administration, as he likely would easily get Republican support for new tax cuts targeted towards the middle- and lower-class earners so long as they are not paired with tax hikes on the wealthy or increased spending.