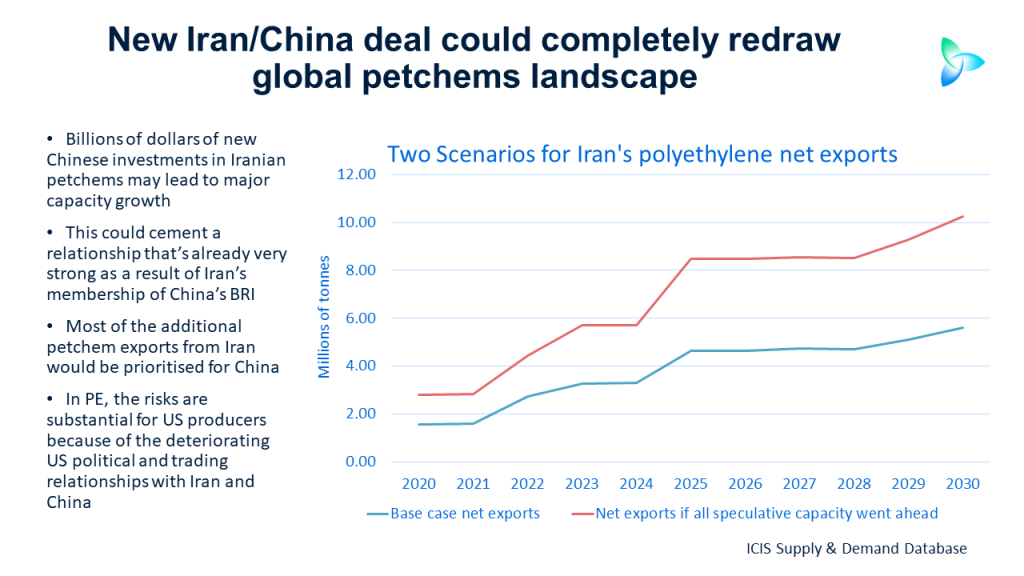 ONCE AGAIN, please don’t say I didn’t tell you. A proposed new investment and security agreement between Iran and China is the kind of closer relationship I had expected back in September 2016 when I wrote:

Iran has the world’s fourth-biggest oil reserves. But sanctions have, of course, severely limited its ability to tap these reserves.

China and Iran are both short of one thing: Jobs. China needs to escape its middle-income trap through creating millions of new higher-value manufacturing and service jobs in its eastern provinces, while in its western provinces it needs to focus on basic manufacturing. Iran’s problem is that it needs labour-market reforms to draw more people into the workforce.

Since I wrote the post, we have seen the collapse of the Iran nuclear deal with the West, the result of the US withdrawing from the agreement. This has left Iran in greater need of overseas partners and so, maybe, the new deal which is subject to ratification by the Iranian and Chinese governments.

The last four years have also seen a major deterioration in the economic and political relationship between the US and China.

Even if trade tensions ease after the US November presidential election, the US and China are at risk of continuing to drift towards a new Cold War given the consensus political view in America that the rise of China needs to be curtailed. This has increased China’s need for new trading and political partners.

“The partnership would vastly expand Chinese presence in banking, telecommunications, ports, railways and dozens of other projects. In exchange, China would receive a regular – and, according to an Iranian official and an oil trader, heavily discounted – supply of Iranian oil over the next 25 years,” writes The New York Times.

China earlier announced plans to invest $280bn in Iran’s oil, gas and petrochemical sectors, according to the Petroleum Economist. The new deal could firm-up these plans and add momentum to further Chinese ambitions to invest $120bn in improving Iranian transport and manufacturing infrastructure.

The new deal might result in even more Chinese money flowing into Iran’s energy and petrochemical industries, which have long been starved of investments because of sanctions.

The recent US-driven toughening of sanctions has further limited Iran’s ability to take advantage of its abundant natural resources (it has some 10% of global oil and gas reserves and Iran’s South Pars Gas Field is the biggest in the world).

The new deal would also dovetail with China’s Belt & Road Initiative (BRI). Iran, as I again discussed in 2016, fits the China model of a BRI partner country as it has lots of natural gas resources and a youthful population, both of which China lacks.

Using the polyester chain as an example, what follows is an example of how economic cooperation between the two countries could be further strengthened:

In 2019, China imported 1.5m tonnes of HDPE from Iran, 19% of its total. This made Iran China’s second-biggest trading partner for the polymer behind Saudi Arabia.

Last year’s LDPE imports from Iran were 3.2m tonnes. At 22% of the total, this made Iran China’s biggest overseas supplier. The same applied to methanol where 3.1m tonnes from Iran accounted for 65% of China’s total imports.

Iran has long had major ambitions to expand petrochemicals capacity. The ambitions might now be realised because of Chinese support.

If you assume that all the PE capacities listed as speculative or unconfirmed in our ICIS Supply & Demand Database go ahead in 2020- 2030, there could be a big difference in net export flows.

As the chart above illustrates, based on using the same operating rates and local consumption in both scenarios, our base case assumes that Iran’s net exports will rise from 1.6m tonnes this year to 5.6m tonnes in 2030.

Add all the unconfirmed plants into the picture and net exports rise from 2.8m tonnes this year to 10.3m tonnes in 2030.

Over the whole forecast period if all the speculative plants were to happen, China would have a total of 33.2m tonnes more PE to export compared with our base case.

A lot of the extra shipments could got to China because the closer relationship between the two countries and because China seems likely to remain in big PE deficits over the next decade.

(Unlocking proposed investments in Iranian methanol plants could have as big an impact on global trade flows in this product, as I shall detail in later post).

Where might this then leave US PE producers? They could be entirely squeezed out of the China market. US producers may also find themselves unable to ship to other developing countries that are members of the BRI, thanks to the creation of the entirely self-sufficient China-led trading bloc.

In the New Normal of a much more fragmented global trading environment, geopolitical analysis is going to count far more than standard cost-curve analysis when evaluating where new petrochemicals will be built.

Geopolitics will also trump all other factors in assessing how profitable new plants are once they are online.

Feedstock, logistical and technological advantages will become largely irrelevant if petrochemical producers cannot sell into the world’s biggest-volume export markets, all of which are in the BRI.