Home Blogs Asian Chemical Connections Post-coronavirus world: How China could end up in a stronger position

Post-coronavirus world: How China could end up in a stronger position

These are, always, my views only and not the views of ICIS

Here is another of attempt at long-term crystal-ball gazing where I again try to imagine the petrochemicals landscape in the post-coronavirus 2025 world. My earlier post had looked at the rise of sustainability and affordability that could work in parallel with the emergence of a stronger China. Things may of course turn out completely different. But I hope this at least helps get discussions going at your companies, as we all need to start planning for what the competitive landscape will look like when this crisis is over. 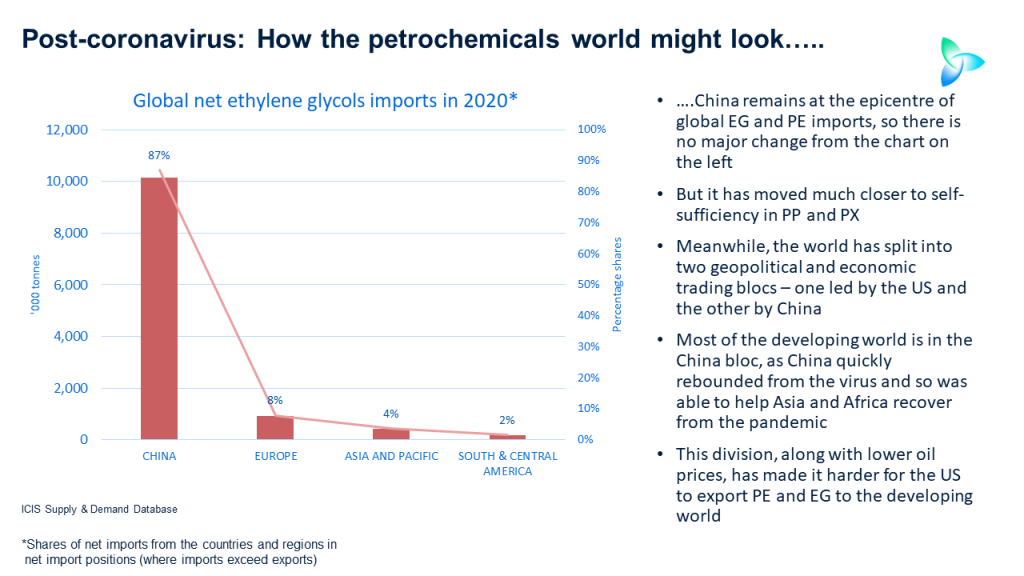 ….IT IS 2025 and the post-coronavirus world is beginning to settle down into two very separate geopolitical and trading groups. The shift towards a bipolar world – that was already taking place before the virus paralysed the global economy in 2020 – is now almost complete.

On one side of the great divide stands the US, most of Latin America, Canada, some European countries (the EU has just about survived but nation states are increasingly going their own way) and some countries in Asia and the Middle East.

On the other side of this new global division is China, which because it emerged more quickly from the virus, was able to build stronger relationships with developing Asian and African countries than was the case with the US.

The US struggled for a few years to get its economy functioning normally again because there had to be were several rounds of testing, tracing and isolating citizens before the disease was brought under control. This meant the US focus had to be on domestic issues, leaving it with little time to build better ties with the rest of the world.

In contrast, apart from a few further isolated outbreaks of the virus and the setback of deeply negative economic growth in 2020, China’s recovery from the virus was strong enough to give it the freedom to push forward on its Belt & Road Initiative (BRI).

Emergency deliveries of medical equipment and expertise to developing countries, where health systems were in danger of collapse, laid the foundation for stronger geopolitical and economic ties. So did China’s support for major debt relief for the developing world during the height of the crisis in 2020 and 2021.

Next came funding, through its BRI programme, for much-needed new infrastructure in the developing world: bridges, roads, railways, power stations, and ports etc.

This was followed by a further major relocation of low-value manufacturing capacity from China to the rest of the developing world. This was a process that had begun long before the coronavirus pandemic as China sought to compensate for its rapidly ageing population.

The new petrochemicals landscape in 2025

Oil prices remain at much lower levels than during the pre-crisis era. This has just about wiped out the US’ ethane advantage.

Meanwhile, heavy import tariffs that protect a new China trading and geopolitical zone make it very hard for the US to export its polyethylene (PE) and ethylene glycols (EG) to the developing world at a standalone profit.

But US plants built before the crisis continue to operate at high operating rates because of the need to dispose of unwanted ethane in order to keep domestic methane (natural gas) production going and to allow liquefied natural gas (LNG) exports.

US exports of PE and EG, therefore, continue to move overseas in big volumes, with profitability now measured from the natural gas wellhead onwards rather than just from the steam cracker onwards.

Variable costs at the steam cracker-to-PE/EG levels are usually covered, but not investment costs. This has led to the postponement or cancellation of new US cracker and derivatives investments.

China remains at the heart of the global petrochemicals import and re-export business. The re-export part of the picture has increased because of the accelerated pace of relocating Chinese manufacturing overseas.

China is still by far the world’s biggest importer of EG, This is turned into either polyester fibre or fabrics that are exported to fabric manufacturers and clothing and non-clothing (pillowcases, bedsheets etc.) factories in developing countries with lower labour costs.

Exports from these factories to some parts of the West are more problematic because of import tariffs surrounding the US-led trading and geopolitical zone. But the strong recovery in the developing world, led by China, is providing enough support to allow factories in countries such as Bangladesh and Pakistan to run at high operating rates.

China’s strong supply chain advantages and its sophisticated state-of-the-art plastic processing technologies have also enabled it to maintain its edge in this industrial sector. It is even experimenting in robotics to run plastic processing plants in order to compensate for its higher labour costs.

The dexterity required to sew a shirt or blouse, however, remains a technology barrier too far for robotics. Low labour costs, therefore, remain the No 1 competitive advantage in this business – hence, China’s big overseas investment push.

China has significantly increased its petrochemicals capacity in order to reduce its vulnerability to supply chain disruptions. Overseas petrochemicals plants were not always able to supply the petrochemicals China needed during H2 2020 as the coronavirus pandemic disrupted overseas operations. China doesn’t want to be in this position again.

China also sees petrochemicals, especially higher-value grades produced in very modern and state-of-the-art plants, as a way of adding value to its economy. Ir has as a result much closer to self-sufficiency in polypropylene (PP), another trend that was also well underway by the coronavirus crisis began

In paraxylene (PX) – the other big fibre immediate required for polyester fibre production – China has moved much closer to self-sufficiency than consensus opinion had imagined would be possible. This is the result of heavy investments in new refinery complexes heavily focused on providing feedstock for petrochemicals.

But the mismatch between local supply and PE and  EG demand remains pretty much unchanged. China has found it impossible to build enough plants quick enough to bridge supply the gap.

Some countries in Asia and the Middle East – the ones that are part of the China-led geopolitical and trading blocs – have been granted preferential access to the China market through low or no import tariffs. These countries, in turn, benefit from investment through China’s BRI.

Low or no import tariffs, along with low oil prices, are supporting the economics of naphtha crackers in Asia. The Asian crackers that were far to the right of the cost curve before the crisis have made a large leap to the left.

Middle East crackers, like their US counterparts, have also lost their ethane advantage. But close relationships between some Middle East countries and China have given producers in these countries advantaged access to the China market.

These links have been further cemented by China’s continued role as the world’s biggest oil importer, with most of the oil coming from the Middle East.

“Prediction is very difficult, especially if it’s about the future,” said Nils Bohr, the famous physicist. The future right now seems harder to predict than ever. Perhaps oil prices will come roaring back, restoring the US ethane advantage. And we all hope that the US quickly and effectively deals with the coronavirus crisis, resulting in its economy roaring back to life.

Or perhaps China may stumble as it continues to recover from the pandemic. Who knows? But, as I said at the beginning, we all need to think hard about what will happen in the post-coronavirus world and prepare for a range of different outcomes.