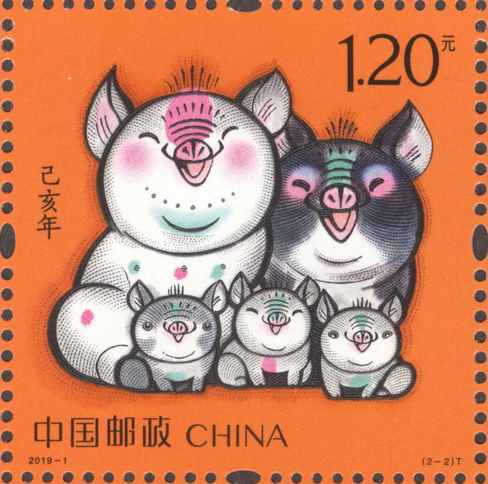 CHINA’S official Lunar New Year postage stamp for 2019 shows a family of five happy pigs made up of two parents and three children. This is if course is the Year of the Pig and in Chinese culture pigs represent wealth and treasure.

Nicholas Eberstadt, a political economist,  is amongst others who say that the postage stamp could be a sign of a U-turn by China towards a heavily pro-natal population policy. But he warns, in an important new paper for the American Enterprise Institute (AEI), that the demographic challenges facing China will take an awful lot of fixing.

The paper adds to the work of myself and fellow blogger Paul Hodges. We have been warning since 2011 of the risks China’s ageing population poses to growth in the world’s most important chemicals market. China’s extraordinary chemicals demand growth over the last 20 year is in my view the biggest single reason for the strong profitability the industry has enjoyed

China’s economic success has been largely built on a surplus of young workers willing to move from rural to urban areas to work in factories making very cost competitive goods for export to the West. This surplus has now disappeared and is becoming an ever-growing deficit of young people.

The core of problem is the premature greying of China’s population because of its disastrous One Child Policy.

Even though the policy was dropped in 2016, China last year saw its lowest number of births for half a century. Births per mother are well below the population replacement rate of 2.1 per mother and are forecast to remain so until 2040.

China is in danger of becoming old before it is rich. Despite tremendous economic growth over the last 30 years, it remains a poor country relative to the West. China’s average per capita income was just $8,827 in 2017 versus $59,532 in the US, according to the World Bank. The IMF has warned that China’s pension and healthcare liabilities could rise to 100% of its GDP.

Next week I will consider some downside scenarios for China’s chemicals demand growth that factor in Nicholas Eberstadt’s findings. Meanwhile, here are some key takeaways from his paper.

The scale of the problem

Between 2015 and 2040, China’s population aged 50 and over will increase by roughly 250m as the population under 50 falls by the same amount. During the same years the 15-29 age group – which across all modern societies has the highest education and is the most IT and tech savvy – will shrink by 75m.

Equally as bad will be the fall in the 30-49 age group during this same time frame. It is forecast to fall by a quarter or by more than 100m. This is the generation that tends to be the most innovative and entrepreneurial.

The main way that seniors would be able to add value to the economy would as a result be through physical labour. But they will surely be the least able amongst China’s age groups to carry out these jobs.

His strategy of boosting growth through opening up wouldn’t have been successful without an extraordinary growth in urbanisation that only happened because China had a youthful populatioon. China’s urban population grew by 600m between 1978 and 2010, 200m more than the growth in the overall population. This involved young people moving from the countryside to the cities to work for low wages in manufacturing export centres.

Goods exported to the West led to a booming Chinese economy. This was especially so after China had joined the World Trade Organisation in 2001. Membership meant the removal of the tariffs and quotas that had restricted Chinese exports.

This demographic dividend is now over for the reasons I have explained above. In 2015, China’s working age population peaked and is now declining as labour availability and so wage costs increase.

Fixing this could be impossible

Some people argue that China can muddle through its demographic crisis by raising labour force participation rates. But its participation rates for both men and women are comparable or higher than most Organisation for Economic Cooperation and Development countries.

Another solution is to move yet more people from the countryside to the cities. This may not work because the rural-to-urban migration that has already taken place has led to the countryside greying faster than the cities, according to Yi Feng of Peking University. In 2040, a third of the total rural population will be 65 or over, double the ratio for urban China.

China argues that more urbanisation will work. But what about the impact of the hukou residency system?

Hukou is a system for household and personal registration which dates back to imperial China, with its modern form introduced during the Chairman Mao era. Hukou makes it illegal to live outside your authorised area, although temporary hukou can be granted if someone finds a job in another city or province.

Some 200m people had temporary hukou status as of 2010. They are in effect second-class citizens as they have no right to local services such as healthcare and education. Unless hukou is reformed this might limit the benefits from further urbanisation.

There has been talk of major reform for two decades but the AEI paper presents two reasons why the policy will likely remain more or less unchanged:

Another solution is immigration. But it would require the arrival in China of 100m young people. The logistical, governmental and economic challenges of moving so many people would be huge, as would finding immigrants with the right educational and cultural background. Would the Chinese people be prepared to accept immigration on this scale? And would enough people want to move to China?

Perhaps the answer might be social credits granted to Chinese citizens based on how many children they have. The more children the more access to cheap financing and good employment opportunities etc.

Incentive schemes aimed at boosting the size of families have been tried in other countries and have failed, such as in Singapore. Singapore’s birth rate remains stubbornly low.

Let’s assume that China can fix the problem. It would still take around 20 years for someone to grow up, be educated and join the workforce. There are no shortcuts available here, I am afraid.

The solution is only 20 or so years away then? Sadly, no. Births per mother are not suddenly going to jump to 2.1 – the population replacement rate. –from today’s 1.6. Successful policies would instead lead to a gradual rise to 2.1, meaning it would take a lot longer than 20 years for China to fix its demographic deficit.

Let’s hope that this is all too gloomy and that this year, the Year of the Pig will mark the beginning of a major demographic turnaround.

This won’t remove your need for scenario planning. You need multiple scenarios all the way from China’s complete failure to total success in solving its demographic challenges. You need to understand implications for China’s chemicals demand across this range of scenarios. As I said, watch this space. Next week I will revisit this subject with some data crunching.