The following opinions are my personal views, and, as always, do not express the views of ICIS 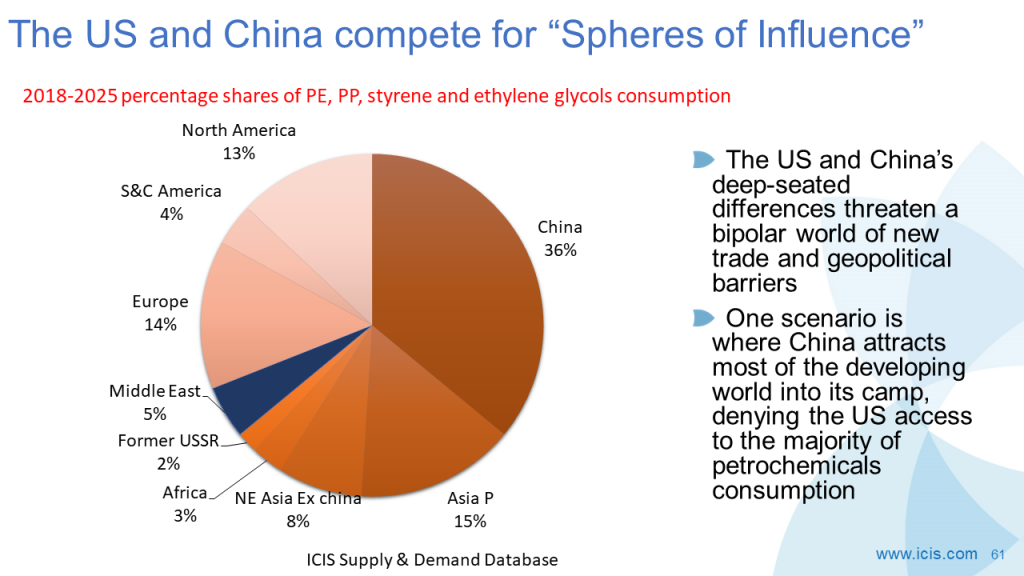 PRESIDENT TRUMP could have blinked at the prospect of Christmas shoppers punishing him at the ballot box for the increased cost of gifts beneath their trees. This is what I think is behind his decision to delay the imposition of 10% additional tariffs on Chinese smartphones, laptops video-game consuls and some items of clothing from 1 September until 15 December.

On the issue of handling the economy, the President’s popularity rating is high, whilst on many other issues he is suffering from strong public disapproval. He was therefore at risk of jeopardising his one big trump card, if you can excuse the pun, in the run-up to the 2020 Presidential Election.

Because the president has in my view has blinked, China might be perceived to have gained the upper hand in negotiations. The President’s critics could conclude that if Trump is not prepared to allow the US economy to endure economic pain, he will give in on other key points of disagreement in the trade war.

Being perceived as having gone soft on China would go down badly with both some of Trump’s political supporters – i.e. the China hawks in his administration – and all but one of the Democratic candidates for the party’s next presidential nominee. Only Joe Biden is pro free trade with China and in favour of free trade in general.

If China is seen to have gained the upper hand, the President may once again double down on China. He could reverse his decision on the tariffs.  A lower-risk strategy might be to further target Chinese access to US technology through Chinese hi-tech giants such as Huawei.

There are many short term scenarios from hereon in and so expect extreme uncertainty and volatility in petrochemicals and other markets. As for the long term, I believe that the least likely all of the scenarios is that the fundamental and deep-seated differences between the US and China will be easily resolved.

These differences rest on the new US consensus that China must be contained rather than accommodated. This is a radical shift from the old consensus that began with the Nixon and Kissinger outreach to China in 1972 and came to an end shortly after Trump came to office (although, I said, the President’s arrival in the  White House coincided with a shift in Democratic opinion. So this is not just down to the President).

Both sides of the political aisle in Washington now seem to believe that the rise of China represents a threat the US status as the No1 technological, economic and geopolitical Superpower.

And as Graham Allison’s excellent book, Destined for War, argues, you must be weigh the immovable object of US opposition to China against China’s irresistible force. He details how President Xi Jinping, since he came to power in 2012, has built strong public support for his “China Dream” – a four-point transformation plan for China’s economy and society:

The title of Allison’s book should perhaps include a question mark as it is not inevitable that the US and China will end up at war.  The core concept of the book is Thucydides’s Trap, named after the philosopher who wrote of the rise of the ancient Greek state of Athens, the fear that this instilled in the rival state of Sparta and how this led to war.

Over the past 500 years, these conditions have occurred sixteen times with war breaking out in twelve cases, most recently, between Germany and Great Britain, writes Allison.

The four cases where war have been avoided include between Portugal and Spain during the 15th century and between Great Britain and the US during the late 19th and early 20th centuries. In both these positive outcomes the rising and established powers found ways of accommodating each other.

The next war between Superpowers could well descend into a nuclear war. It was only by sheer good luck that a nuclear war between the US and the Soviet Union was avoided during the Cold War.

Let’s be optimistic and hopeful. Nobody of course wants war and so let’s assume war is avoided. Over the next decade and more let’s instead consider a scenario of accommodation and of “Spheres of Influence”. Let’s then consider what this would mean for the petrochemicals business. Here are two outcomes:

You may of course strongly disagree agree with my conclusions, which is a good thing because we need to build a wide range of scenarios for the petrochemicals industry. There is no “one size fits all” solution to business planning in a world of extreme political uncertainty.