Home Blogs Chemical Connections China polyolefins market H1 review: so far so good, but beware of the risks ahead

China polyolefins market H1 review: so far so good, but beware of the risks ahead 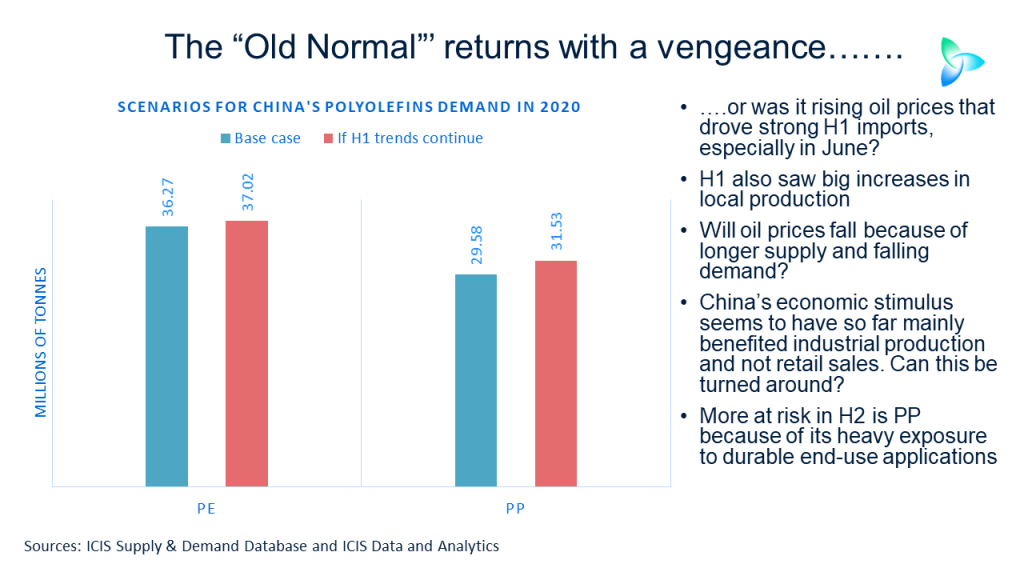 ALL looks fine in the polyolefins world. The Old Normal appears to have reasserted itself as Chinese demand has come roaring back.

(Note that all the following numbers are on a year-on-year basis unless otherwise stated.)

H1 2020 data shows that polyethylene (PE) apparent demand (net imports plus local production) grew by an average of 5% across the three grades. This is slightly ahead of our forecast for real demand growth, adjusted for inventory distortions, of 3% for the full year of 2020.

The stronger performance of LLDPE versus LDPE is explained by the high oversupply in LLDPE. LDPE film price premiums over C4 LLDPE film grade in the CFR China market are this year at their highest levels since 2011. C6 and C8 grade LLDPE premiums over LDPE (C6 and C8 can be substituted for LDPE) have also declined so far this year.

HDPE pipe grade imports were reported to have been very strong in H1 2020 as the Chinese government launched a big infrastructure-based economic stimulus programme. Disruptions to China’s supply of pipe grade are also reported to have supported imports, which now seem to have to come an end.

If real demand growth for the full-year 2020 is 5%, this would not be a bad performance at all. This would be a big drop from last year’s growth of 14%, but a decline was always going to happen even without the pandemic as 2019 growth was heavily supported by government restrictions on imports of plastic waste. The restrictions, which virtually banned imports of waste, continued to support virgin-resin demand in 2019 after their introduction in 2018.

Real PE demand growth of 5% for 2020 would leave this year’s consumption at 36.3m tonnes versus our base case of 35.2m tonnes. This would be around 750,000 tonnes more than our base case when you look at the exact numbers. In the context of the pandemic, this would be a resilient performance.

The H1 2020 polypropylene (PP) story is one of even stronger apparent demand growth. Net imports rose by no less than 29% with domestic output 10% higher as China undergoes a major increase in capacity. This left apparent demand 13% higher versus our estimate of real demand growth for the full- year of just 2%.

If we annualise these numbers, 2020 PP consumption would reach 31.5m tonnes against our base case of 29.6m tonnes, some 2m tonnes higher when you again look at the exact numbers. Wow!

A time for caution

But it is worth noting the big increases in June net imports versus May in both PE and PP. A sharp month-on-month rise occurred in LDPE net imports even though on a year-on-year basis, as I said, LDPE net imports were significantly lower.

This suggests to me that cargoes which arrived in June were booked as oil prices rallied off their April lows. Buyers may well have been hedging against further increases in crude. Now, though, oil prices are stuck in a narrow range at around $40/bbl. There is, in my view, a significant risk that crude will head lower on rising supply and weaker demand.

“Sales fell for five straight months as shops, restaurants and other crowded places closed during the pandemic. Though strict containment measures have been relaxed, consumer demand has not responded correspondingly in a sign of the far-reaching impact of the coronavirus,” Reuters added.

The export portion of China’s economy confronts further risks as the global pandemic worsens. The number of deaths in the US has risen beyond 150,000, many states are imposing or re-imposing lockdowns, and US unemployment was 11% in June. Germany is facing its worst-ever post-war recession. Restrictions on travelling from Spain have been re-introduced as the number of new cases spikes in south eastern Europe.

You should also continue to take note of the impact of China’s floods. The floods have so far affected more than 54m people, including 3.7m displaced and 158 people dead or missing. The economic damage will now be higher than the earlier ICIS estimate of $18bn. Polyolefins end-use demand will have been damaged in the short term, although in the long term we can expect major government spending to repair the damage.

A tale of two polymers

Real PE demand might well increase by around 5% this year – perhaps a percentage point or two lower or higher. But I don’t see the 13% rise in H1 apparent demand for PP as being anywhere close to the final outcome.

Even though demand for PP non-woven grades for export as face masks has gone through the roof, before the pandemic the non-woven portion of the overall market was very small.

51% of global PP demand is for durable applications where demand remains depressed. For instance, despite recent month-on-month improvements in the important China autos end-use sector, H1 year-on-year sale were down by 22.4%. China’s sales of durable goods might recover later this year. But I believe this will not be enough to result in full-year 2020 real PP demand growth of 13%.

And remember again to watch oil prices very closely. Bargain hunting in both polymers may have bolstered imports in a classic example of apparent demand getting ahead of real demand. Beware of the potential for destocking if crude prices begin to fall.

Who would lose out if H2 apparent demand growth in PE and PP declined? It won’t, in my view, be local producers because of all the cheap oil China imported during H1, which is one of the main reasons why crude prices recovered.

Cheap crude will, I believe, support local production via the availability of competitively priced naphtha and other feedstocks. China has also taken a strategic decision to boost its petrochemicals self-sufficiency in general. There is therefore a risk of a sharp fall in imports.

What you will always get here is independent and objective analysis so you can see the trees that make up the wood. My aim is to also challenge conventional and “surface” thinking that often leads to the trees remaining invisible. Good luck out there and stay safe.