Why the polypropylene industry must switch from volumes to value 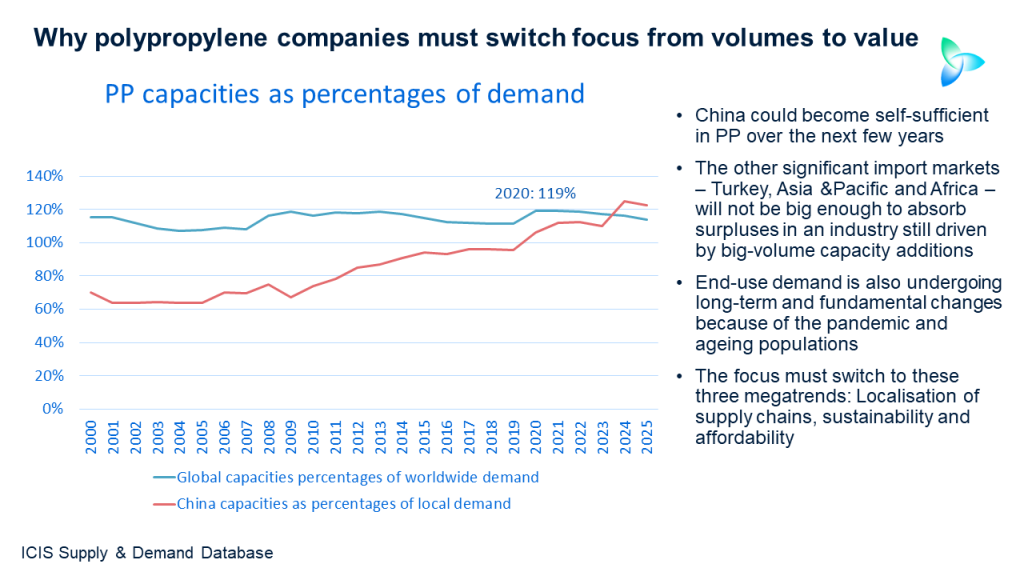 EVERYONE knows about the oversupply in the polyethylene (PE) market as it has been discussed in more presentations and conferences than any of have had hot dinners. But less understood is the extent of oversupply in the global polypropylene (PP) business, which you can see from the above chart on the left.

Global PP capacity as a percentage of worldwide demand is expected to reach 119% in 2020, the highest since 2009. This is being driven by China. In 2000, Chinese capacity as a percentage of domestic demand was 70%, which is expected to reach 106% in 2020. Here is the critical thing: between 2021 and 2025, we estimate that the average capacity versus demand in China will be 116%. I believe that China will become entirely self-sufficient in PP over the next few years as it runs its new capacity very hard.

Several people have said China lacks the quality of catalysts to run its plants hard enough to achieve complete self-sufficiency. Another argument in favour of continued imports is that China doesn’t have the technologies to produce the full range of higher-value copolymer grades that it requires. But we have been here before. I remember 20 years ago being told that China would never build that many crackers because it didn’t have the expertise.

Sticking to Plan A isn’t going to work

Those who are sticking to Plan A – PP businesses centred on operating and building new plants with a major focus on exporting to China – might, however, take solace from the chart below. In 2010, China accounted for 64% of global net imports (this was among countries and regions that import more than they export). This year, we expect this to decline to 42%. 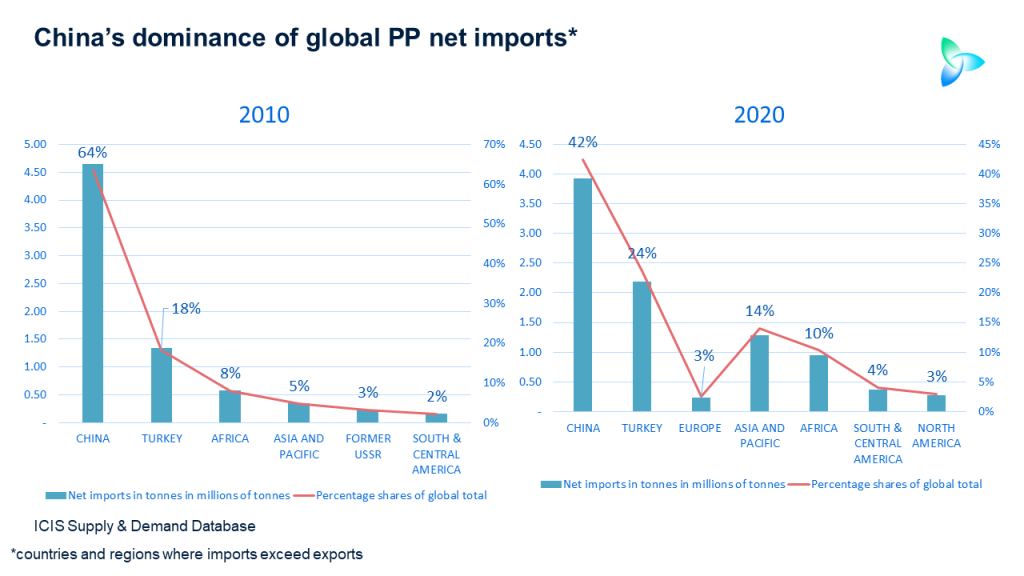 But every producer with molecules to spare will be studying analysis like this and will also see that Turkey, Asia &-Pacific (including South and southeast Asia) and Africa represent good opportunities. These countries and regions look set to become more fiercely contested battlegrounds as the global PP industry tries to clear its oversupply.

And just imagine turning China’s 42% of global net imports into zero by say 2022 – and even switching China’s position to one of being at net exporter! This is a very realistic possibility.

We must also consider the damage to demand caused by the pandemic. In 2019, 51% of global PP end-use demand was, according to industry sources, in the following sectors: autos (10%); electrical manufacturing (13%); equipment manufacturing (13%); household appliances (10%); and construction (5%).

Autos sales might receive a temporary boost from government “cash for clunkers” schemes. But the recovery in sales will be patchy as it will depend on the extent and efficacy of government schemes.

The huge loss of incomes and wealth will hold back the recovery in these end-use sectors, as will long-term changes in how we work. The necessity of working from home because of the pandemic will, I believe, turn into permanent home working because of economic efficiencies. This will lead to substantially less demand for autos for commuting to work.

The recovery in the electrical manufacturing, equipment manufacturing and household appliance sectors will similarly rely on the scale and effectiveness of government stimulus. Rebounds will again be patchy, with wealth and income losses also affecting the rate of recovery.

PP pipes that go into construction might well, however, benefit from major injections of government cash into infrastructure projects, as infrastructure is a proven way of getting economies working again.

That leaves the PP end-use sectors that have done well in the pandemic – packaging (30% of the total market) and the ‘others’ category (19%).

Packaging has done well because of government unemployment insurance and job-furlough schemes that have prevented the kind of fall in grocery spending among low-income workers that we saw during the Global Financial Crisis.

It looks as if many of these schemes will be extended in the US and Europe. But as they are also being adapted, it is impossible to say whether the policy changes will further support grocery sales, or if we will see a decline in average supermarket spending.

This leaves the ‘others’ category, which in 2019 included PP that went into personal protective equipment, such as PP non-wovens used to make facemasks and injection-grade PP used to make hand-held thermometers. Sales here have obviously gone through the roof.

But before the crisis these end-use applications only had a small share of the total market – hence, they were placed in the ‘others’ category. PP non-wovens were, for instance, only around 3% of the total market. Let’s say this is now 15% – a 500% increase which seems a reasonable estimate. The increases in the ‘others’ category are unlikely to replace the lost demand in the 51% of the market detailed above.

Oversupply could, as a result, be worse than the above chart  indicates because of weaker demand than we are forecasting. Our ICIS Supply & Demand Database estimates annual average global demand growth at 4% in 2020-2025 and at 5% in China. China will, in my view, run its PP capacity hard even in weaker-than-expected demand conditions in order to add value to its economy and replace imports.

Companies should assume that China’s imports will disappear and thus delay or cancel projects that are centred on this not happening.

This won’t help companies in countries such as South Korea and Singapore that are heavily reliant on exports to China from existing capacity. They must think of other things to do with their existing production other than engage in likely counter-productive prices wars in the other significant net import markets – Turkey,  Asia-& Pacific and Africa.

The PP industry as a whole needs to find other ways of doing things because of the loss of the China market and long-term changes in demand patterns.

Changes in demand patterns require detailed techno-commercial studies followed by all the human, logistical, technological and economic difficulties in implementing new business models. Watch this space as I will return to these themes in more detail. But here, in summary, I believe the industry needs to focus its offerings on:

The opportunities are great for the PP companies that build their strategies around these three megatrends. What must also be at the core of everything they do is a focus on value rather than volumes.