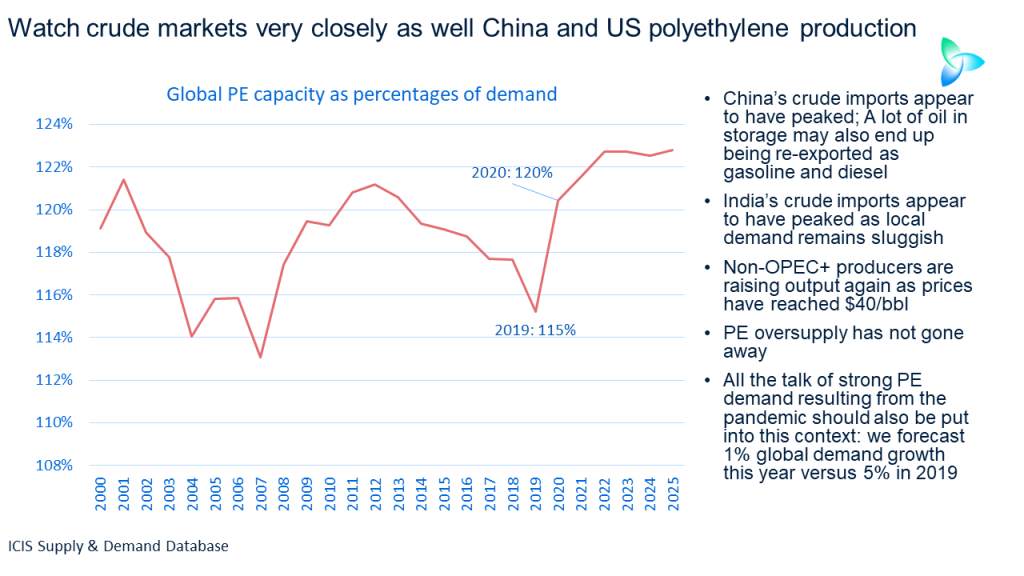 BRENT crude futures surged by 80% during the second quarter and enjoyed their best three months since 1990, when, during the first Gulf War, they jumped by 142%.

The market, as I discussed last month, has been heavily supported by China buying lots of oil when prices were cheap. As Reuters reports, China imported a record 11.3m bbl/day of crude in May with volumes set to rise in June and July.

China’s crude imports are, however, expected to return to more normal levels in Q3 and here’s the thing: A lot of the oil, which is sitting in storage, may end up being re-exported as gasoline and diesel . China has added a great deal of new, state-of-the-art refining capacity.

Evidence to this effect comes from the latest Chinese refinery operating rates. As Reuters writes: “State-backed and independent refineries raised their operating rates to 80% and 74% respectively in late May from around 67% and 38% in the first quarter, according to China-based consultancy Longzhong Information Group”.  This is despite local fuels demand which has yet to recover to pre-crisis levels.

India also stockpiled crude during the first four months of this year. But during May, its refineries were still only running at operating rates of 77% versus 102% a year earlier because of weak domestic fuels demand.

Non-OPEC+ producers are raising output again with prices at $40/bbl. Last week’s Dallas Federal Reserve survey showed more than a third of US shale producers were restarting production by the end of June, and a further 20% were due to restart in July. Libyan production, which has slowed to a trickle, may also be about to increase.

The US earlier this week reported its highest number of coronavirus cases since the pandemic began with several states imposing lockdowns. The US, the UK, Russia and Brazil are all struggling to contain the spread of the pandemic.

All these factors suggest that the 80% rise in oil prices during Q2 is not sustainable. I am therefore sticking to my view that crude will see a sharp downward correction during the third quarter, along with, of course, petrochemicals markets.

The rise in Chinese refinery operating rates, also has implications for China’s polyethylene (PE), polypropylene and paraxylene  production. As I’ve discussed over the last couple of weeks, I believe that China will run its new capacity very hard in 2020 because of competitively priced feedstock supplies from local refineries.

I believe China’s new plants will also run hard because a) They are far to the left of global cost curves and b) China won’t want to risk running short of petrochemicals and polymers raw materials because of a very unstable geopolitical environment. Shortages would threaten downstream employment.

What this means for the global PE market

PE lies at the heart of the global petrochemicals business. It is why most people build steam crackers. And if you run a liquids cracker then of course the strength of PE supply and demand balances play a large role in how much propylene, aromatics and C4 olefins co-products you can produce.

Demand for PE in 2020 looks as if it will not decline by as much as it did during the Global Financial Crisis because there is something fundamentally different about the pandemic.

This might relate the availability of credit, which was tight in 2008-2009, but is ample today because of government-funded furloughs and other job-protection schemes. Nobody appears to care that much about consuming single-use plastics right now as environmental concerns take a back seat. Lockdowns seem to have boosted demand for PE into food packaging and hygiene and medical products (I will examine these themes in detail in later posts).

But oversupply remains an issue even with a relatively modest year-on-year dip in global PE demand (we see it growing 1% this year compared with 5% in 2019 as against a 3% decline in 2008). We entered this crisis with a temporary tightness in PE markets because of production cutbacks resulting from poor margins and turnarounds in the Middle East. Reduced associated gas supply has more recently said to have constrained Middle East PE output. Reduced associated gas supply seems to be the result of lower OPEC oil output – one of the reasons for the rally in crude prices.

Once again, please, please be careful out there.