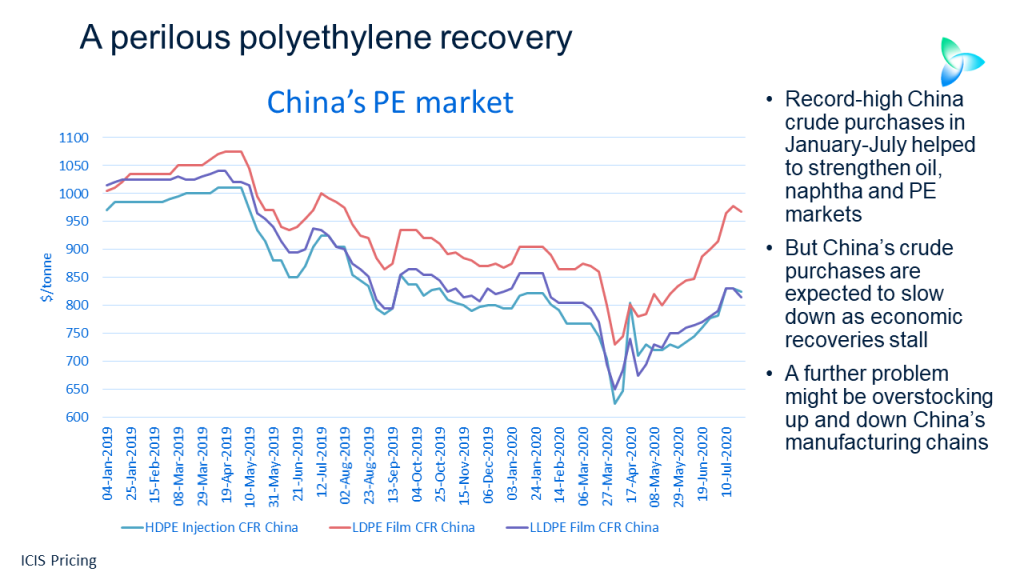 EVEN by China’s standards, where just about every number is eye-wateringly large, the data on oil imports during the first seven months of this year is quite extraordinary. Reuters writes:

Commercial crude inventories had grown to 1.12bn bbl by end-June which was enough to run local refineries for three months, added the wire service.

It could take up to two months to unload crude tankers off the coast of China as new storage is built.

China has in my view increased oil imports, refinery operating rates, petrochemicals production and finished-goods manufacturing, in readiness for a strong recovery in domestic and overseas demand. The big increase in crude imports has also been driven by record-low prices up until April.

The extent of the recovery in domestic demand may have been exaggerated. The official Q2 GDP growth of 3.2% doesn’t seem to add up when you look at the underlying data on industrial and service sector production and retail sales. At least one economist believes that China’s economy might have even contracted in Q2.

And now we have the drag on Chinese growth by the worst floods for 30 years that have already caused $17bn of direct damage, with some 45.5m people affected and 2m people evacuated. Refinery operating rates have been cut back as the floods have exacerbated oversupply in some petrochemicals, especially purified terephthalic acid, according to an ICIS report.

The floods, which I first flagged up as a problem for China’s economy three weeks ago, may be about to get worse. The ability of the Three Gorges Dam on the Yangtze River to continue to contain heavy rains is of particular concern.

The recovery in export demand China was banking on also looks some distance away.

The latest data on the US economy shows spending down and unemployment higher as lockdown measures increase.

In Europe, the usefulness of improving purchasing managers’ indices is being questioned by economists. Retail sales are forecast to decline as post-lockdown pent-up demand fades away. Some countries have re-imposed restrictions on travel from Spain due to a spike in coronavirus cases in three of the country’s provinces. The number of new cases has also increased in several southeastern European countries.

But Reuters expects Chinese purchases of crude to moderate over the next few months now that storage is close to full. Big build-ups in global oil and oil-product inventories during the second quarter are another problem. US distillate inventories are 26% above their five-year average. US gasoline demand is on the decline as lockdown measures across many states in the US increase.

Meanwhile, the US is returning to a net export position in crude because the increase in prices since April has pushed some shale-oil operators back into profitability.

The recovery in polyethylene (PE) markets (see the above chart) may as a result be under threat if crude once again heads south.

Local refineries were reported to have been running at record-high operating rates until they cut production in response to the floods. This seems to have fed through to competitive supplies of naphtha from local refineries to domestic steam cracker-to-PE complexes as China undergoes a major round of PE capacity expansions.

Looking just at linear low density PE (LLDPE) as an example, January-May local production jumped to 3.5m tonnes from 3.1m tonnes during the same months in 2019 – a 13% increase when you look at the exact numbers. This compares with our base case for 2% growth in full-year LLDPE production.

In January-June, we estimate production growth fell to 11% on a peak turnaround season and possible disruptions to output caused by the flooding.

Crude in storage needs to go somewhere and some of it will, I believe, go into continued very high levels of LLDPE production during the rest of this year because a) the oil was bought when prices were cheap, and b) China wants to boost its petrochemicals self-sufficiency in order to add value to its economy and hedge against overseas supply disruptions.

Let’s assume therefore, for argument’s sake, that full-year 2020 LLDPE production growth is 13%. This would imply an average operating rate of 96% versus our base case forecast of just 86%.

If we then stick to our base case for 2020 demand growth of 4%, this add up to net imports falling to 5.1m tonnes from last year’s 5.7m tonnes. The loss of 600,000 tonnes of import demand in a long global market would  be significant.

The sensitivity of net imports to lower demand growth, which seems a strong possibility given the economic weaknesses, is big. Assume only 2% growth – and again a 13% rise in production – and imports would slip to 4.9m tonnes.

If you look at the latest LLDPE import data, you might think I am talking nonsense. After flat January-May growth in imports on a year-on-year basis, January-June imports rose by 11% to 3.1m tonne.

But, as with crude, I see this as bargain hunting by importers as many of the cargoes must have been booked when prices were lower than they are today. And as with oil again, the rise in LLDPE imports is likely an example of stock building up and down manufacturing chains in anticipation of economic recoveries that haven’t happened.

I must stress once more that it is really important you do not overextend yourself. Try to see through all the noise emerging from financial markets and focus on the real demand and supply fundamentals.

PREVIOUS POST Why the polypropylene industry must switch from volumes to value
NEXT POST China polyolefins market H1 review: so far so good, but beware of the risks ahead