On Friday, I examined how China’s paraxylene (PX) net imports could fall to as little 8m tonnes in 2020 from last year’s 16m tonnes. This would have major negative implications for the big exporters to China such as South Korea, Japan and India. I believe this is the beginning of a long-term shift – the subject of today’s post where I consider how China’s imports could, quite literally, collapse over the next ten years. The same may happen in polypropylene, styrene and even polyethylene (PE). The conventional view is that China will remain a very big PE importer for many years to come. I will look at long-term import scenarios for these three other products in later posts. I have long been arguing that the global petrochemicals industry needs to a new business model that is less reliant on Chinese deficits. 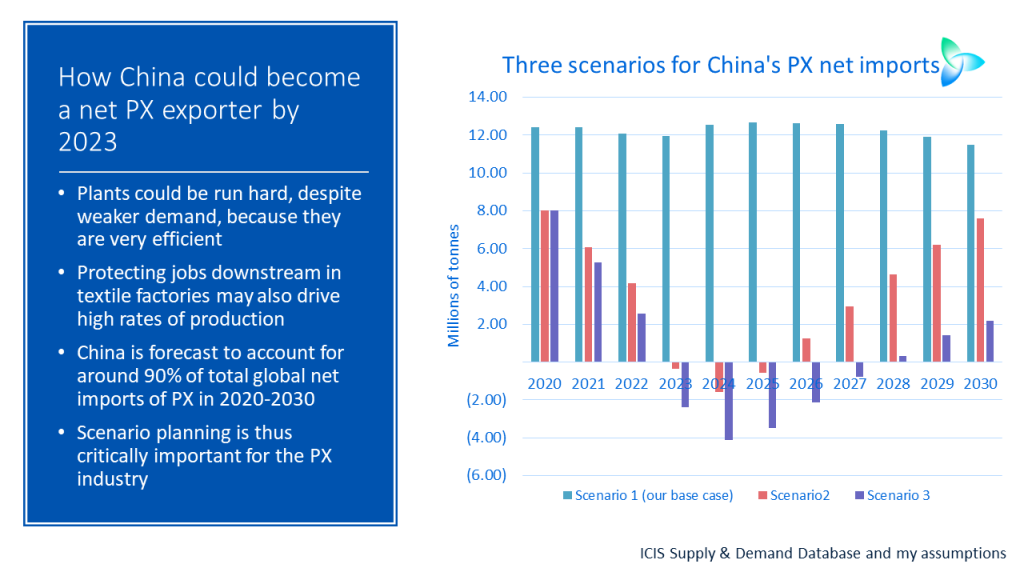 SIX YEARS AGO, I first suggested that China could become much more self-sufficient in paraxylene (PX) and might even move into a net export position.

Since then many new PX plants have come onstream as China has tried to improve the competitiveness of its polyester value chain. A problem highlighted by local government officials back in 2014 was that many new purified terephthalic acid (PTA) plants being built lacked local feedstock, according to petrochemical industry executives I had spoken to.

A second motive behind the push towards greater independence from PX imports was to build a new refinery industry that would be highly profitable, through integration downstream into PX and through cost-efficient production of transportation fuels.

The government, I was told, also had the vision of China becoming a significant exporter of gasoline and other fuels.

I’ve written several further posts on this same theme since 2014 as a body of opinion has built that China’s PX imports would collapse.

Take China out of the picture and global trade in PX almost vanishes. This is no exaggeration: in 2020 we estimate China will account for 93% of total global net imports with its share of net imports set to remain around 90% until 2030. This is amongst the countries and regions that import more than they export.

China might, though remain a major net importer of PX. Everything hinges on how hard it runs its plants and the strength of demand growth.

The ICIS Supply & Demand base case is an excellent and essential starting point for the kind of scenario work we provide that can help you plan your PX business.

Scenario 1 assumes an average operating rate of 67% during the forecast period, with demand growth averaging 4%. This would compare with actual average capacity utilisation of 82% in 2009-2019. This might make sensewhen you consider that demand growth averaged 15% in 2009-2020. Why run plants hard when consumption growth is so much weaker?

But I take different view. I see China running its PX plants very hard because the plants are state-of-the-art and, as a result, are very far to the left of the cost curve.

Also, as far as this year is concerned, China bought big quantities of oil when crude was very cheap and put these into storage. This will give it a further cost advantage in PX manufacturing and in making lots of fuels for export as Asia gradually emerges from lockdowns.

And why depend on the kindness of strangers at a time of great geopolitical and economic uncertainty? It makes sense to increase PX self-sufficiency to avoid the risk of an interruption of imports and the danger that downstream textile factories might have be to shut down. China’s first priority has long been to protect local employment.

Under Scenario 2, again included in the above chart, China runs its PX plants at an average operating rate of 88%. Demand growth remains unchanged from our base case. I add to Chinese production 80% of the output from Hengyi Petrochemical’s 1.5m tonnes/year Brunei PX plant.

This seems to make sense given that most of the PX from the facility will be consumed by Chinese producer Yisheng Petrochemical’s three PTA plants in Ningbo, Zhejiang province, which have a combined nameplate capacity of 5.15m tonnes/year. Hengyi owns a 50% stake in Yisheng Petrochemical, while the other 50% is owned by fellow private-sector firm Rongsheng Petrochemical.

The end-result of Scenario 2 is China becomes a 1.5m tonne net exporter in 2024 before moving back into net imports. Net imports climb quite healthily to 7.6m tonnes in 2030, but this would still compare with our base case estimate of 11.5m tonnes.

Scenario 3 assumes the same 88% operating rate – and again includes 80% of the Brunei plant’s output. But I lower demand growth by one percentage point per year to an average of 3% because of the long-term effects of the coronavirus pandemic.

Affordability and sustainability pressures will, I believe, greatly reduce the demand in polyester end-use sectors such as fast fashion. I shall revisit this subject in later posts.

The outcome of Scenario 3 is net exports reaching 4.1m tonnes in 2024. Self-sufficiency then modestly declines until China requires 2.2m tonnes of net imports in 2030 – 81% lower than our base net imports for the same year.

These alternative scenarios fit with my long-held view that cost curves will only get you so far in understanding how this the petrochemical industry operates. Social and political dynamics are at least as important, if not more important, than costs per tonne of production.

And in the post-pandemic world, social and political factors, rather than the conventional cost curve, will determine the direction of new investments, demand growth and trade flows. As I shall consider in later posts, we need to largely throw our old assumptions out of the window and start again.