Asia spot LNG prices have continued to slide lower in recent weeks, falling below the levels seen in December 2016 and 2017 despite most of the current year having been stronger than the two before.

The ICIS front-month East Asia Index plummeted from $10.850/MMBtu on 16 November by more than two dollars to $8.525/MMBtu on 14 December. It’s now down almost four dollars from the year-high of $12.25/MMBtu seen in mid-September. The EAX represents the value of deliveries to Japan, South Korea, China and Taiwan.

High temperatures had brought a price spike in June 2018 as they boosted air-conditioning demand in Japan. Prices were again strong in September/October as China prepared early for winter, filling up its storage tanks in an attempt to avoid a repeat of the strong prices brought about by the country’s unexpected surge in demand the previous winter. But those high inventory levels have been met by an unusually mild start to winter in the east Asia region, sending prices tumbling lower.

New supply has also been coming into the market. Russia’s Yamal LNG project in the Arctic has now reached 16.5 million tonnes per annum production capacity after completing the commissioning of its third production train in December. Project partners have tackled a potential shipping constraint on their output by establishing a new transfer point at Honningsvag, northern Norway, allowing their ice-breaker fleet to focus its time in the icy waters near Yamal, while standard tankers carry the cargoes onwards to Europe and beyond. Such transfers were previously taking place further from Yamal, at the north European ports of Montoir and Gate. 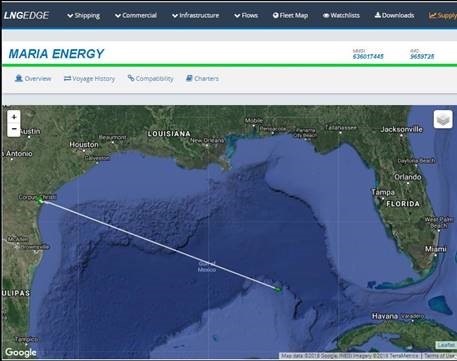 Australia’s Ichthys LNG now has both its new production trains in operation, bringing its total capacity up to 8.9mtpa, while the 4.5mtpa US Corpus Christi LNG plant loaded its first cargo onto the 174,000cbm Maria Energy on 11 December, around a month after operator Cheniere reported first LNG production at the site on 14 November.

Shell’s 3.6mtpa floating Prelude project, however, remains in start-up phase. The operator hopes for first LNG production by the end of the year to lead to possible first cargoes in the first quarter of 2019.

The EAX January average was $9.539/MMBtu, down 9% from the previous month and 4% from the previous year. In addition to the mild weather and improved supply position, spot prices have also been affected by falling crude oil prices. These reduce the price of the long-term, oil-linked contracts against which importers optimize their spot positions. Lower contract prices may allow importers to increase contract uptake rather than buy spot.

The South America Index and Northwest Europe Index (SAX and NEX) both also fell, though less than the EAX. This had the effect of narrowing the average spread between the NEX and the EAX to $1.486/MMBtu from $2.006/MMBtu the month before.

The reduced premium for Asian destinations has led Atlantic-basin producers to continue to target many of their cargoes at the European market rather than pay extra shipping to send them further east, with a marked upswing in, for example, US cargoes to Europe. US exporters have also shrugged off some bullish domestic moves, which saw winter Henry Hub contracts rise from around $3/MMBtu to the mid $4.00s/MMBtu, with the increase not seen as strong enough to make exports unprofitable.

November saw a changeover in the global league-table for importers and exporters, with new title-holders for both inflows and outflows.

China’s imports for November of over 6 million tonnes of LNG are thought to have beaten Japan, making China the world’s biggest importer for November. Meanwhile, the start-up of Ichthys in Australia saw that country’s monthly exports of over 6m tonnes narrowly overtake Qatar, based on calculations from voyage data. Final customs data is not yet available for the month.

It should be noted that China and Australia are only the world’s biggest importer and exporter for the single month of November so far. On a twelve-month basis, Japan and Qatar remain in the number one position for the moment.

It remains to be seen how strongly importers such as China could come back into the market later in the winter when their initial stocks are run down. The mild start to winter has delayed the need to replenish inventories beyond initial expectations, and set the market on a bearish trend that could be hard to turn around in the second half of winter unless appetite starts to increase soon.

Spot LNG prices in east Asia have fallen back rapidly over the last eight weeks,...

The global spot LNG market remained in a bearish mood from mid-December to mid-J...