Global spot LNG prices fell to their lowest levels of the year in late-March and the lowest levels seen since summer 2016. There was a rapid rebound in the middle of April, however, raising questions as to whether prices below $5.00/MMBtu had just been a temporary dip, or could return later in the year when additional new supply comes onstream.

Spot LNG prices fell to their lowest levels since summer 2016 in late March.

The East Asia Index (EAX) spot price for deliveries to Japan, China, South Korea and Taiwan in May was assessed at $5.250/MMBtu in mid-March, fell to a $4.275/MMBtu low on 27 March, then bounced back up to $5.700/MMBtu by mid-April. The average price for the month was $4.717/MMBtu, which was down 21% from the previous month and 35% from the same period the year before.

Some market sources thought the rapid fall in prices in March had been overdone, and the market was correcting itself back higher. Outages at the US Sabine Pass LNG production plant may also have reversed some of the bearish sentiment. Sabine Pass trains one and two, each of 4.5 million tonnes per annum capacity, were both out of action for maintenance from mid-March to mid-April, returning around 10 April. The newest train at Sabine Pass, the 4.5mtpa train five, also shut in early April, returning later in the month.

Sabine Pass has five 4.5mtpa trains, each consuming around 0.8 Bcf/day feedgas at full.

Strong crude oil prices may also have helped pull up the spot market. Brent crude continued to strengthen from mid-March to mid-April, amid tensions in Libya and other matters. It averaged $11.943/MMBtu across the period, more than double the price of spot LNG. In the longer term a split between gas and oil prices could encourage new consumers to move into the gas market, such as transport operators moving from oil for their shipping and haulage to LNG. In the short-term, strong oil prices make importing extra cargoes under long-term, oil-linked gas contracts look expensive, and encourage importers to look for extra cargoes in the spot market instead of seeking volume flexibility from their normal suppliers.

The Northwest Europe Index (NEX) gained some ground in April too, rising to $4.872/MMBtu in mid-April. The NEX averaged $4.606/MMBtu across the four week period as a whole. The South America Index was at $5.050/MMBtu in mid-April, having averaged at $4.970/MMBtu over the previous four weeks.

New supply due later this year

Although the market has seen an initial rebound, there is a large amount of new supply that could enter the market across the summer and the remainder of this year that could threaten to push spot prices back lower again. Indeed, spot prices for Asia were dipping a little lower again in the second half of April, though holding above $5.00/MMBtu.

The largest proportion of the new supply projects are in the US, where potential new capacity before the end of 2019 includes the 2.5mtpa Elba Island plant, three 4.5mtpa trains at Cameron LNG, two 4.6mtpa trains at Freeport LNG and a second 4.5mtpa train at Corpus Christi, a total of 29.7mtpa from the US alone. That is around 9% of the total 318mtpa size of the LNG market in the year 2018.

Australia’s 3.6mtpa Prelude plant could also start up in coming weeks. The floating production project loaded its first condensate cargo in late March, though there remains as yet no definite date for the first LNG cargo. Russia’s Yamal plant could have an additional 0.9mtpa train this year, while Argentina could start the 0.5mtpa Tango FLNG facility.

If a number of the new plants make good progress on their start-up schedules, the extra supply could soon be weighing on the market again, likely leading producers to dump more cargoes in the liquid trading markets of northwest Europe, pulling down European gas prices and in response Asian spot LNG again.

However, if new projects are delayed, or there is extended maintenance on older plants, or unexpected problems such as weather delays at major facilities, this could counter-balance some of the impact of new supply. An additional possible bullish factor for the third quarter of the year would be high temperatures in summer boosting power generation demand for air-conditioning. Hot weather in Japan pulled up the price of spot cargoes for July and August last year.

Northwest Australian ports suffered some weather delays in late March due to Tropical Cyclone Veronica passing through the region, leading to the temporary closure of some LNG ports, though there turned out not to be a major impact on supply in this case. 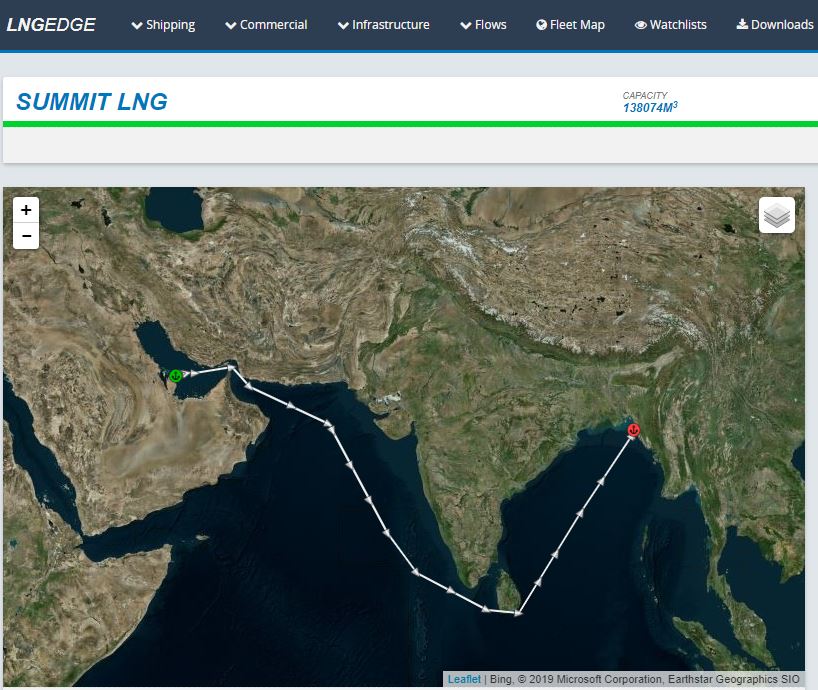 Some newer importers will continue to show growing demand. Summit Power in Bangladesh said on 20 April that its floating storage and regas unit, Summit LNG, had arrived ahead of schedule to act as the country’s second LNG import facility. It is now moored at Moheshkhali near the Excellence FSRU that arrived as the first import facility in late 2018.

This article was written by Vija Pakalkaite (EU Carbon and Power Analyst) and Ma...

Spot LNG prices continued to strengthen from mid-September to mid-October as the market takes an inc...

Spot LNG prices strengthened from mid-August to mid-September on the back of ongoing repair work in ...