Global spot LNG prices held steady over the four weeks from mid-April to mid-May, remaining at a low level compared to last year, with no major changes to near-term supply/demand fundamentals.

The ICIS East Asia Index for June averaged at $5.386/MMBtu across the period, rebounding 14% from the previous month, but down 32% from last year, on the back of continuing oversupply in the market as strong production outstrips growth in demand.

The South America Index, averaging $5.072/MMBtu, was also stable, as was the Northwest Europe Index, which averaged $4.339/MMBtu across the period. The East Asia region of Japan, China, South Korea and Taiwan has now rebuilt a premium of a dollar to northwest Europe, after a period of close alignment between the regions in late March/early April, but the spread is not yet wide enough to encourage reloads of LNG from Europe to Asia.

Despite the lower prices for northwest Europe, the region is continuing to attract a much higher number of cargoes than last year, as its liquid trading hubs provide an accessible market into which to sell surplus product facing limited demand elsewhere. The UK, for example, received 5.7 million tonnes of LNG during January to mid-May 2019, compared with 5.0m tonnes across January-December 2018 as a whole. 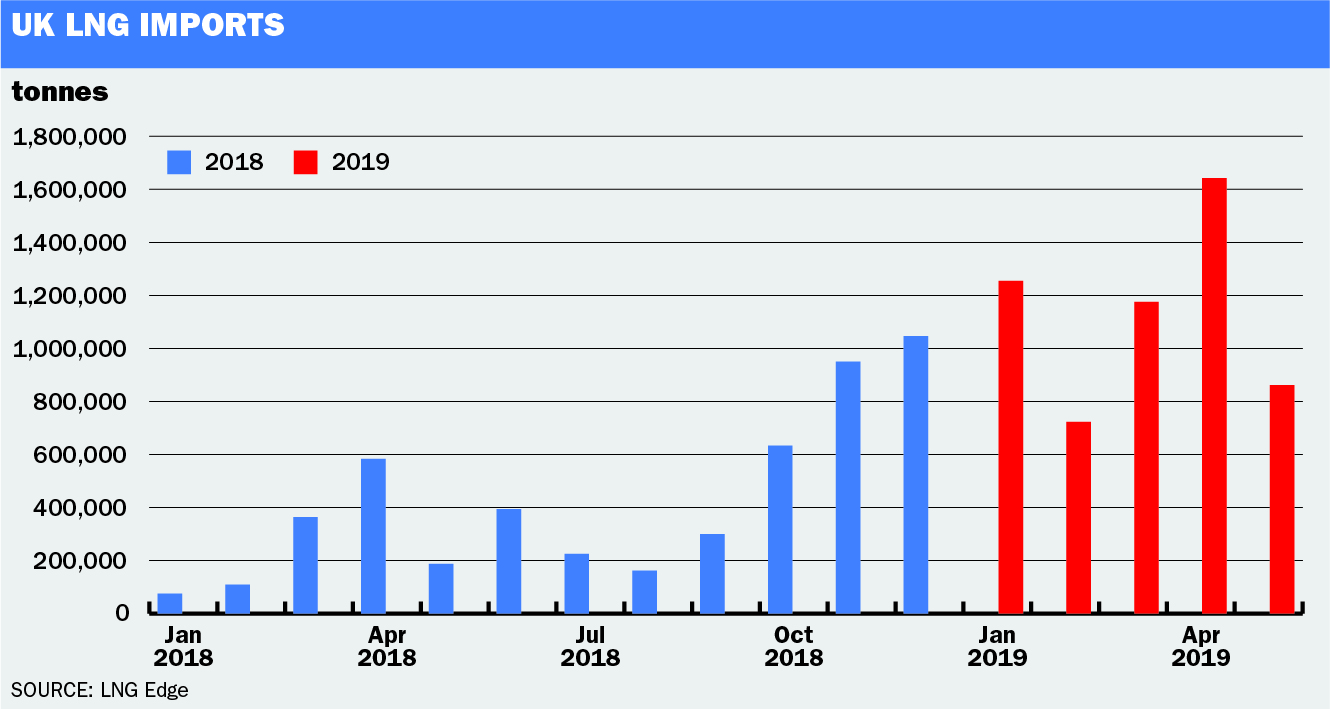 Spot LNG remains much lower priced than oil, with Brent crude averaging at $12.425/MMBtu across the period, down just 4% from the same time last year. Customers able to turn down volumes in long-term, oil-linked import contracts would prefer to do so and buy extra volumes in the spot market instead.

First LNG output for US Cameron

The 4.5 million tonnes per annum US Cameron LNG train one has now produced its first LNG, coinciding with a facility visit by US President Donald Trump. The 177,000cbm Marvel Crane tanker set course for the terminal for late May, possibly to load the first cargo. Meanwhile Shell has stated that it expects the first LNG cargo from its 3.6mtpa Prelude floating production vessel offshore Australia to load in the second quarter, meaning before the end of June.

On the downside, engineers McDermott announced recently delays to some of the US trains they have been working on. Cameron’s second 4.5mtpa train is now due in the first quarter of 2020 and its third in the second quarter of 2020. The Freeport project’s first 4.6mtpa train is expected in the third quarter this year, its second in the fourth quarter and its third in the first quarter next year.

Kinder Morgan, the operators of the 2.5mtpa US Elba Island project, have also reported “minor issues” with commissioning, possibly set to delay first production beyond the original May start-date.

Australia’s 4.9mtpa Pluto plant is undergoing planned maintenance across most of May. The 4.5mtpa Corpus Christi plant in the US and all five 4.5mtpa US Sabine Pass trains were all running normally in May, however, after some reductions during April.

Overall the market looks set to remain well supplied across the summer and into winter. On the demand side, the risk of a repeat of last year’s record-high summer temperatures in Japan looks reduced. In summer 2018 temperatures over 40 degrees Celsius near Tokyo boosted energy demand to run air cooling systems, requiring extra LNG imports, but the forecasters suggest summer weather in east Asia will be nearer the average this year.

There was a first for the shipping market in May when the 210,000cbm Al Safliya crossed through the Panama Canal from the Pacific to the Atlantic on 12 May. This was the first time such a large LNG tanker, a Qatari Q-Flex class vessel, had been through the canal. Qatar has recently announced a tender for at least 60 and possibly over 100 new ships over the next decade to support its plans for major production increases, from 77mtpa output now to 110mtpa in the mid-2020s. 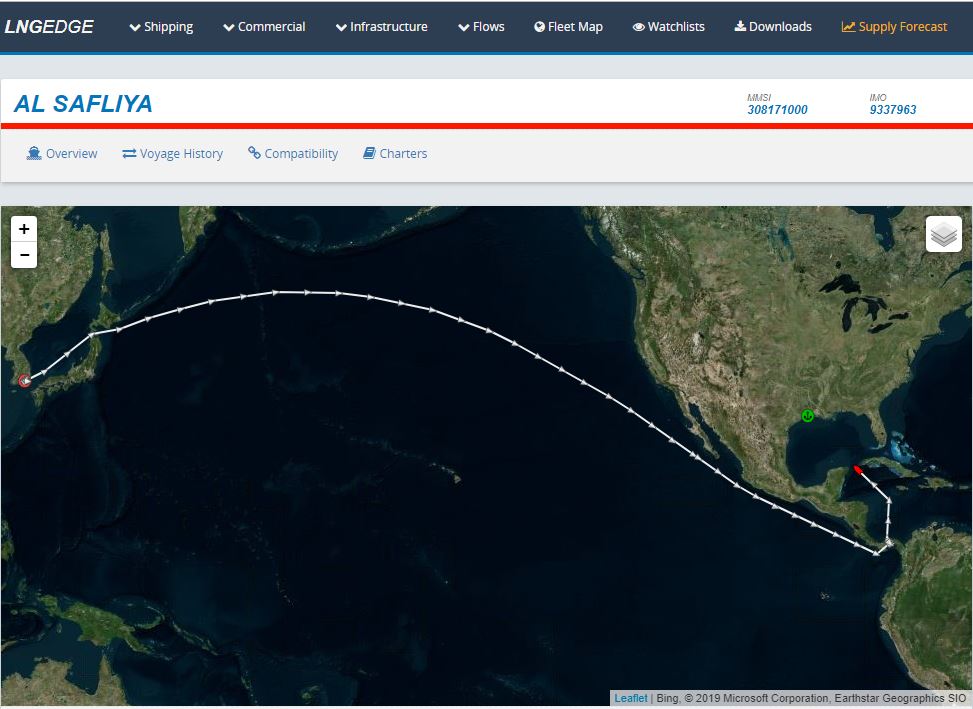 Neighbouring Saudi Arabia’s oil producer Saudi Aramco has, meanwhile, made its entry to the LNG market, selling its first cargo. The country does not yet have any LNG production of its own, however, so this was obtained from elsewhere.

The remaining major development of the period was an escalation of the US-China trade war, resulting in China deciding to increase tariffs on US LNG imports from 10% to 25%. Flows of LNG from the US to China have already shown a significant decrease since tariffs were first introduced last year. Chinese importers have asked their suppliers to send cargoes from other producers instead, such as from Australia and Qatar.

As many large suppliers, such as Shell, have global portfolios of production assets, they often have capacity to switch deliveries around within their portfolios, meaning that the tariffs have not so far been as disruptive for the market as might initially have been feared.

PREVIOUS POST IMO 2020: Will you sink or swim?
NEXT POST Spot LNG falls, but tensions in Gulf