Spot LNG prices remained low around the world in mid-June, prompting continued speculation over whether US producers might cut back output later this year to re-balance the market. New projects continue to come into operation, including the loading of the first cargo from Australia’s 3.6 million tonnes per annum (mtpa) Prelude facility and the start-up of LNG production at the second 4.5mtpa train at the US Corpus Christi site. But any escalation of recent tensions in the Middle East could rapidly reverse recent trends, as attacks on oil tankers passing through the Gulf of Oman raised questions about the security of shipping in a key export region for LNG.

The ICIS East Asia Index for July slipped back under five dollars in the second half of May, with the EAX averaging at $4.552/MMBtu across the four weeks from mid-May to mid-June. This was down a huge 53% from the previous year, and down 15% from the month before, as the growth in new supply projects continues to outstrip growth in demand.

The South America Index averaged at $4.543/MMBtu, fairly close in line with the EAX, with some demand from importers in the region for their winter heating needs. The North West Europe Index remained low at an average $3.644/MMBtu, which put it around 90 cents below the EAX. Although Europe is lower than Asia, it is still receiving strong deliveries of LNG, as it offers a liquid market into which to sell surplus cargoes.

NEW PRODUCTION IN US, AUSTRALIA

The surplus is building as new production facilities come onstream around the world. Last month, in May, the 4.5mtpa train 1 at Cameron LNG produced its first LNG. That facility has now loaded its first cargo, onto the 177,000cbm Marvel Crane, which was due to deliver its load to Dunkirk in France in mid-June. 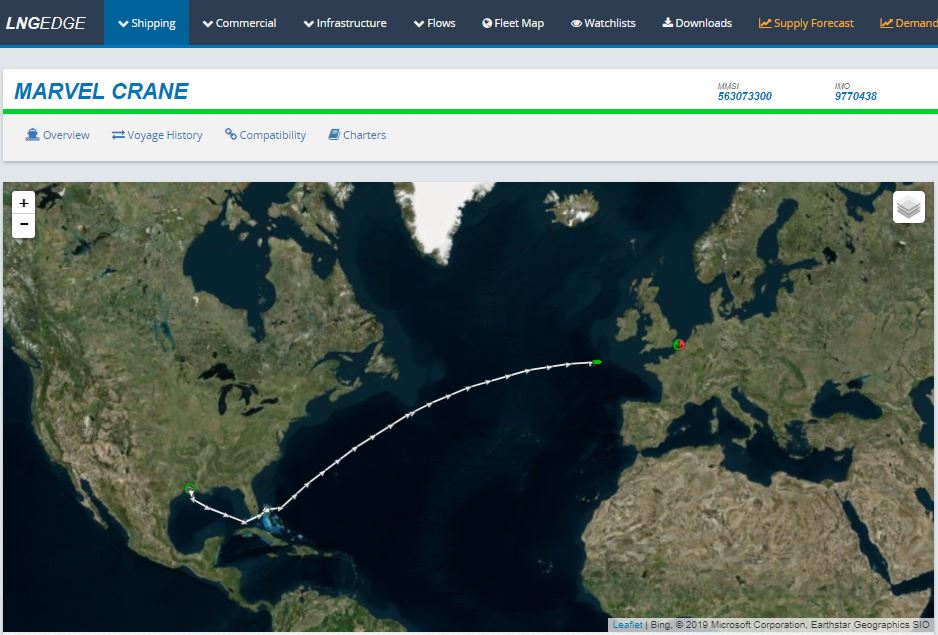 Shell’s 3.6mtpa Prelude floating production unit off northwest Australia loaded its first cargo in early June, onto the 173,000cbm Valencia Knutsen, which set course north to Asia. Following up soon after, Cheniere announced on 14 June that it had achieved first LNG production from the second 4.5mtpa train at its US Corpus Christi plant. The first train there started late last year.

There remain many more new projects expected online this year. The 2.5mtpa US Elba Island plant was originally due to start in May. It has suffered some commissioning issues, but could still start up this summer. The US Freeport project could start two 4.6mtpa trains before the end of the year. Russia is planning an additional 0.9mtpa train at its Arctic Yamal project, possibly before the end of 2019.

The Tango FLNG floating production unit berthed at Argentina’s Bahia Blanca port also produced a partial cargo of LNG for export in recent weeks, though at only 30,000cbm it was only one fifth of a normal cargo size.

There have been some outages affecting existing plants, but not enough to overturn the general bearish feel of the market. Australia’s 4.9mtpa Pluto plant suffered problems with a compressor unit after returning from its maintenance at the end of May. It is now expected to be out most of June too. Russia’s 5.5mtpa Sakhalin 2 train 1 has had a recent outage, and planned summer maintenance has been moved earlier to add into the event. Nigeria has restarted output from NLNG train one, but the 3.0mtpa train three remains out until the end of June.

Bangladesh has now received the first cargo at its second floating storage and regasification unit, the Summit LNG facility, with the arrival of the 174,000cbm Creole Spirit in the second half of May. Bulgaria also made an entry into the LNG market, announcing the purchase of two spot cargoes, one of which has already been received. These will be imported via Greece’s Revithoussa terminal, with the LNG regasified in Greece then piped north across the border to Bulgaria.

Strong production growth is likely to keep prices low in coming months, raising questions over the balance of the market around September/October when European storage facilities could be largely filled, limiting the region’s ability to absorb cargoes, and further US plants could be loading their first shipments. Industry debate has focused on whether US plants could cut back their output in response to low prices, a move that they would try to avoid, but could be growing more likely, particularly if there is a mild start to the northern hemisphere winter this year.

The oil markets jumped higher in mid-June after an attack on two tankers passing through the Gulf of Oman. No LNG tankers have yet been involved in recent problems in the area, but – like oil – it is a key export route for the gas market, and any long-term disruption to shipping could feed through to a substantial impact on supply. The world’s largest producer, Qatar, sends its output through the Gulf, as does a second smaller producer, the United Arab Emirates. According to LNG Edge, Qatar and the UAE together made up some 83 million tonnes of exports in 2018, or 26% of the global total of 316m tonnes. Even an impact on the oil market alone would affect LNG, by raising the price of long-term gas import contracts that are index-linked to oil.

Recent weeks have also been busy for new contracts. Saudi Arabia’s Aramco inked a major 5.0mtpa deal with Sempra for its proposed US Port Arthur project. Poland’s PGNiG increased the volumes it is due to take from Venture Global’s proposed Calcasieu Pass and Plaquemines LNG projects in the US. And trading company Gunvor said it was discussing a deal with Commonwealth LNG for 1.5mtpa from its early-stage project, also named Commonwealth, also in the US.