Spot LNG prices for east Asia held steady for most of the last four weeks at around $11.00/MMBtu for February deliveries, but started climbing higher towards mid-January on the back of maintenance outages at major production facilities, and influenced by the continued uptrend of crude oil.

Asian LNG has maintained, and even widened, its premium of around $4.00/MMBtu over northern European spot gas prices, offering a continued incentive to reload LNG from Europe to ship eastwards to countries such as South Korea and Japan.

The ICIS February East Asia Index (EAX) opened the period at $10.800/MMBtu on 18 December, ticked up to $11.000/MMBtu, then climbed higher to $11.613/MMBtu on 15 January, its last day as the front-month assessment. This was up 12% from the average EAX price for January deliveries a month earlier, and up 17% from the February average a year earlier.

Various major consumers were heard in the market looking for spot cargoes, including companies from India, South Korea and Japan. Later in the period there was some talk of Japanese buyers moving their remaining requirements into March in the hope of securing lower prices than quoted in the market for February cargoes.

A string of production outages added tightness to the market. Africa’s 5.2 million tonnes per annum Angola LNG had to shut down for repairs in early January, cancelling a spot cargo tender as a result. Russia’s 10.8 mtpa Sakhalin 2 project cut its output to deal with production issues, then scheduled a mid-January outage, which may have resulted in Russia’s Gazprom buying a spot cargo from Australia’s APLNG to backfill lost supplies. The 18 mtpa US Sabine Pass facility also reduced its output in the first half-January, though a recovery of reported feedgas flows into the terminal by mid-month suggested the issues were over by then.

On 10 January there was a leak from the Sabah-Sarawak gas pipeline upstream of Malaysia’s liquefaction facilities at Bintulu, which was expected to reduce output from the nine train, 29.2 mtpa complex.

The first 4.4 mtpa train at Australia’s Wheatstone plant produced its first three cargoes on 31 October, 12 November and 21 November, but commissioning checks and possible outages meant there was no further cargo from the plant until 4 January, when the 160,000cbm Asia Excellenceleft the facility for Japan.

Added to these outages, oil remained strong throughout the period. In dollar per MMBtu prices, Brent crude rose from just under $11/MMBtu at the start of the four weeks to just over $12/MMBtu by the end. Spot LNG for East Asia has been hovering just below crude-parity. When LNG costs as much as oil, this can act as a cap on prices, because certain buyers could switch from burning LNG to burning oil, adding additional possibly supply to the market.

The ICIS February Northwest Europe Index (NEX) averaged at $6.879/MMBtu during the mid-December to mid-January period. This average was some $4.245/MMBtu below the EAX average. With spot shipping from northwest Europe to Japan indicated at only $1.00-1.50/MMBtu, there remained a significant incentive to re-export cargoes from Europe to Asia.

Reloads seen from Europe included: the 170,000cbm Pskov, which left the Dutch Gate LNG terminal on 26 December to head to Oita, Japan; the 148,000cbm Grace Cosmos from France’s Fos Cavaou on 12 January; the 138,000cbm Methane Kari Elin from the UK’s Grain on 13 January, heading to Pyeongtaek in South Korea; and the 156,000cbm Wilforce from France’s Montoir on 16 January.

The North Sea Forties oil pipeline, which had shut unexpectedly in early December, impacting production from North Sea oil and gas fields including Shearwater and Elgin-Franklin, and sending UK spot gas prices surging higher, was back in action by the end of the month.

The first 5.5 mtpa train at Russia’s Arctic Circle Yamal LNG project caught the industry’s attention in December as its first cargoes set out to market, with traders watching to see where these vessels would head. The early cargoes from the project are all expected to be sold in the spot market, with the majority of supplies to be dedicated to long-term contract holders from later in 2018.

A fleet of dedicated ice-breaking LNG tankers is being built to service the Yamal LNG project. During the summer months these vessels will be able to cross through the Northern Sea Route across the Arctic direct to east Asia, roughly halving their delivery time to consumers in countries such as China from 30 days via the traditional Suez Canal route to 15. However, during winter, the ice is too thick even for ice-breakers, and the ships will deliver their cargoes west towards Europe.

To maximize the use of the ice-breakers in colder waters, the Yamal LNG cargoes are being transferred onto normal tankers in Europe, for possible delivery to higher priced markets elsewhere. This can happen either in a direct ship-to-ship transfer, with volumes pumped from one ship’s hold to another’s, or in a ship-to-terminal-to-ship transfer, where the ship delivers into the onshore storage tanks of an LNG regas terminal, then departs, followed by a second ship pulling up to the jetty and taking the volumes back out of the terminal tanks. The decision to use one technique or the other may depend on exact regulations and procedures in place at specific ports.

The first cargo from Yamal was shipped on the 172,000cbm Christophe de Margerie to Grain in the UK, arriving 28 December. The volumes were unloaded into the terminal tanks, then later reloaded onto the 155,000cbm Gaselys, an ENGIE ship that was initially seen heading (via a bunker fuel operation in south Europe) to Everett in Boston in the US. The ship appeared to make an about-turn shortly before arriving, and was heading east as of 19 January. 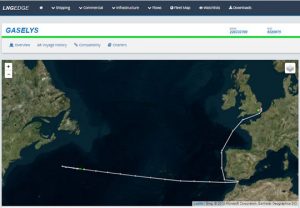 The second Yamal cargo was delivered by the 172,000cbm Boris Vilkitsky to Gate in the Netherlands on 29 December. The cargo was switched in a ship-to-ship transfer onto the 162,000cbm Clean Ocean, which delivered it to Gas Natural Fenosa at Ferrol, Spain.

The third cargo was on the 172,000cbm Fedor Litke. It was transferred ship-to-ship onto the 155,000cbm LNG Jurojin at Montoir, France on 10 January. The LNG Jurojin then headed eastwards into the Mediterranean Sea.

The fourth cargo was back on board the Christophe de Margerie. The vessel left the Yamal LNG port of Sabetta on 6 January heading for the UK’s Dragon LNG. This was expected to be the first delivery of Russian LNG volumes to enter the UK’s national gas transmission system, rather than being reloaded or transferred.

The Gaselys attracted interest as the first cargo of Russian LNG planned to head to the US. The ship broadcast a heading for Boston and crossed most of the Atlantic on a heading to the northeast US city, although as of 19 January it appeared to have turned round again to head back east, for unknown reasons.

The US has, however, been suffering some unusually cold weather across the states, resulting in above-average gas consumption for heating. Early January saw record volumes being taken out of US gas storage facilities, according to data from the Energy Information Administration, plunging stocks in the lower 48 states towards the minimum level seen in the past five years.

Such strong demand meant it made sense for the country to look to import extra supplies. The situation was particularly extreme in the northeast of the US, where prompt spot market prices for the Boston and New York areas (covered by the Algonquin and Transco Zone 6 hubs) were seen as high as $80-140/MMBtu on 5 January, compared to more normal levels for front-month delivery at the southern US Henry Hub around $3.00/MMBtu.

Although the US has seen massive increases in gas production in the past decade, and is now seen as a net exporter of gas on an annual basis for the first time in around 60 years, there are pipeline bottlenecks within the country that can restrict flows from production centres to the highest demand points at certain times. When pipeline capacity to the northeast of the country is full, the only option for extra supply is LNG.

Similar situations have been seen in Europe. For example in early 2017 there was a cold spell in southern France and Spain. Restrictions on pipeline capacity from the north to the south of France meant that French gas company ENGIE resorted to loading LNG tankers with supplies from the Montoir terminal in northwest France, then shipping the LNG around Spain to put it back into the French system at Fos in southern France.

In the US, however, companies are not able to bypass pipeline congestion by sending Sabine Pass cargoes from Louisiana in the south to Boston in the northeast. Shipping regulations from 1920, known as the Jones Act, require all goods shipped along the US coast to be carried by US vessels, which rules out the vast majority of the current global LNG fleet. Delivering a Russian cargo into Boston therefore makes sense, particularly as the cargo’s value within Europe would only have been around $7.00/MMBtu.

The ship’s decision to turn around by 19 January may just reflect further changes in market conditions since the vessel’s course was decided earlier in the month. ENGIE has control of the cargo and can opt to change its destination if it wants.

The Canadian Canaport terminal, also covered by the Jones Act as it transports gas via pipe into the US, has meanwhile taken in recent cargoes from Trinidad.

Meanwhile, the market is still waiting for the start-up of production from the 5.2 mtpa Cove Point liquefaction plant in the US state of Maryland. Late last year the plant was expected to start liquefying gas in November, with the first cargo expected to depart by the end of 2017. However, traders now anticipate a start-up towards the end of the first quarter 2018, or possibly beyond.